Caladium ‘Desert Sunset’ has to be one of the more beautiful and unusual Caladiums I’ve encountered.  Introduced to the trade in 2015, this elegant Caladium was developed by Dr. Robert Hartman, CEO of Classic Caladiums in Avon Park Florida.  Dr. Hartman is a graduate of the University of Florida, which has been active in hybridizing sun tolerant and disease resistant Caladiums for Florida growers over the last several decades.

I learned about Dr. Hartman’s work and his recent Caladium introductions after Don Patterson, of Classic Caladiums, left a comment on my post “Summer Love:  Caladiums,” earlier this month.  When Mr. Patterson suggested he might send me some Caladiums to trial in Virginia, I immediately visited their site to see Classic Caladiums’ recent  introductions.

That is how I discovered this 2015 introduction, C. ‘Desert Sunset.’  I am intrigued both by this unusual color pattern, unique as far as I’m aware in Caladiums, but also the beautiful leaf form.  When I didn’t hear back from Mr. Patterson, I looked into ordering a few of the tubers to enjoy for the rest of this season.  The smallest package, with postage, runs around $40.  Needless to say, I was still considering whether to make the investment this year or wait to order next spring.

But to my utter delight, I spotted the now familiar leaf of C. ‘Desert Sunset’ at our local Lowes store last week!  Monrovia is offering the cultivar this year!

I was utterly amazed to find these beautiful plants already available at our local ‘big box’ nursery, and bought a few pots on the spot.  That gave me four plants for less than half of what I would have invested in 10 tubers, and the plants are already in full leaf; no waiting for them to sprout.

I’ve potted all of the plants together in an 18′ plastic dish and set them in partial sun under the shade of a Crepe Myrtle, but near enough to the driveway that this area remains hot.  I’ve also started a few Dichondra cuttings as ground cover below the Caladiums.  These photos were taken within the first 48 hours of potting up, but on a few different occasions to show the leaves in differing light.

These leaves are variable depending on the relative intensity of the light.  They absolutely sparkle.  And, the leaves change as they grow and mature.  There is a wide variation of shading between different leaves on the same plant.  This cultivar is definitely a cut above the traditional Caladiums available since the 1940s and 1950s.

Natives of Mexico, Central and South America; Caladiums were first collected in the late 18th Century and have been grown commercially and hybridized in this country since around 1910. Although popular in Europe, Caladiums were introduced to the American public in 1893 at the Chicago World’s Fair.

C. ‘White Queen’ and other varieties we are already growing back lit, shortly before sunset, earlier this week.

In the early years of the 20th century, Henry Nehrling and Theodore Mead began breeding Caladiums in Florida. They had nearly 2000 different hybrids, a few of which are still available commercially today.  But Caladium breeding ended for a while when their efforts stopped, until Frank Joyner (C. ‘Postman Joyner’ is named for him) began actively breeding new cultivars at his home in the 1950s.

The University of Florida program began in 1976 and remains the only institutional Caladium breeding program in the world today.  Dr. Hartman and his company, Classic Caladiums, continue the tradition of improving older Caladium varieties and developing improved ones.  Cultivars with “Florida” in their name were developed by the University of Florida and most are quite tolerant  of at least partial sun.  These cultivars are sought out for superior growth and leaf color, tolerance to cold and productivity. 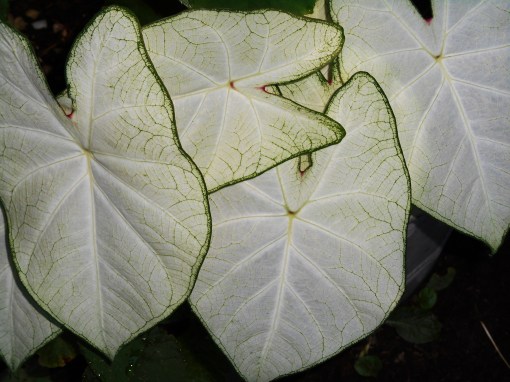 Caladium ‘Florida Moonlight’ is an older white variety which prefers partial to full shade.  This is among the whitest and most luminescent Caladiums available.

You will find a few other absolutely unique and interesting Caladiums offered through Classic Caladiums such as C. ‘Mt. Everest,’ a lance leafed white variety which will tolerate full sun; C. ‘Peppermint;’ and the huge C. ‘Sweet Carolina,’ which reaches 36″ or more and can take full sun.

Any Caladium is beautiful and infinitely useful in the garden.  There are varieties I’ve loved and planted for years, like C. ‘White Queen’ and C. ‘Miss Muffet.’  Now that I’ve learned about these wonderful new introductions my spring choices will be made even more difficult.  So little space, so many beautiful plants…. 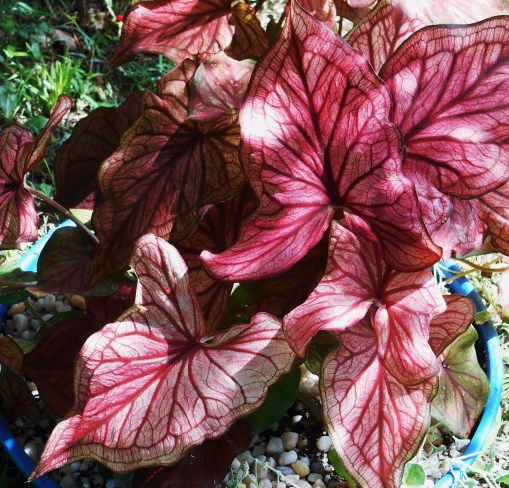 C. ‘Desert Sunset’ in different light shows some leaves to be almost white.

But I will always find space for beauties like C. ‘Desert Sunset.’  This takes the color palette off on a marvelous tangent towards more salmon and copper.  I am looking forward to experimenting with interesting pairings and uses for this special Caladium as it grows through the rest of the season.