Moths, So Beautiful, So Short Lived 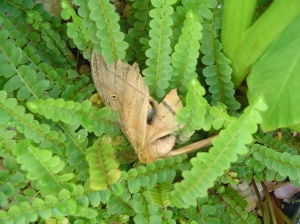 The Polyphemus Moth (Antheraea polyphemus), is a member of the Saturniidae (giant silk moths) family.   This one was found resting in a potted fern on the patio.  I certainly hoped it was only resting, and would be up and flying again when night fell.  Sadly, it wasn’t.  Its very few days of life as a beautiful moth now passed.  We decided to leave it right where it is.  We won’t be pulling it out for a photo shoot.  This is the first large moth of this type I’ve seen.  Perhaps its presence is an invitation to come out of doors more in the night time hours to appreciate the beauty of the night.

Its name is Greek.  It is named for the Polymephus Cyclops of mythology due to the “eye” spots on its wings.

This is a short lived creature who lives to mate.  Although they will eat over 80,000 times their own weight as a caterpillar, they aren’t able to eat at all once they emerge as an adult moth.

The female emits a pherome as soon as she emerges from the chrysalis which calls males to her from miles away.  She patiently waits near where she emerged until they find her, generally around midnight on the same day she leaves the chrysalis.  The mating goes on for several hours, and then she flies off to lay her eggs.

She and the males will both die in a few days because they are unable to eat or digest food.  They live off of food stored in their bodies from their days as a caterpillar, and then they die. 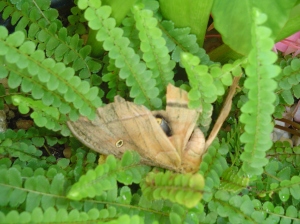 The eggs will hatch in about 10 days.  The eggs are generally laid on the leaves of host trees, and the preferred food of the caterpillars are leaves from hardwood trees such as oak, hickory, and maple.  Caterpillars emerging in late summer will spent winter in their chrysalis, emerging in late spring to begin the cycle again.

Here is another beautiful moth which showed up this week and spent the day resting on a window screen.  This one is definitely still alive.  Its the first pink moth I ever remember seeing.

Dryocampa rubicunda, the Rosy Maple Moth.  The caterpillars prefer to feed on maple leaves.  This is another moth which mates the same night it leaves the chrysalis.  Again, the adults are unable to eat, and die soon after mating and laying eggs.

4 responses to “Moths, So Beautiful, So Short Lived”