Edgeworthia in the Garden 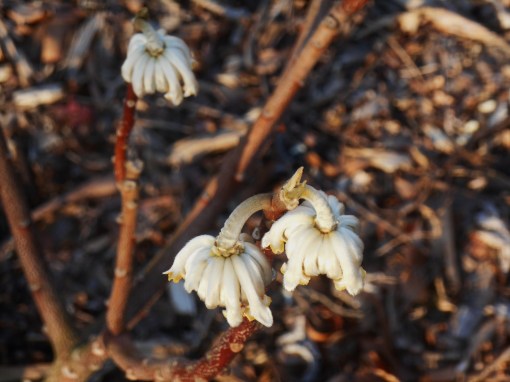 Our Edgeworthia in February, its first spring in the garden.

Early in the spring of 2013, friends invited me over to see their Hellebores in bloom.  We had discovered our common interest in these beautiful winter blooming perennials.

This was a special treat since they had just redone their garden, and they gave me a complete tour.  As we walked around, an unusually beautiful shrub, in full bloom, drew my attention.  “What is that? I’ve never seen anything quite like it!” 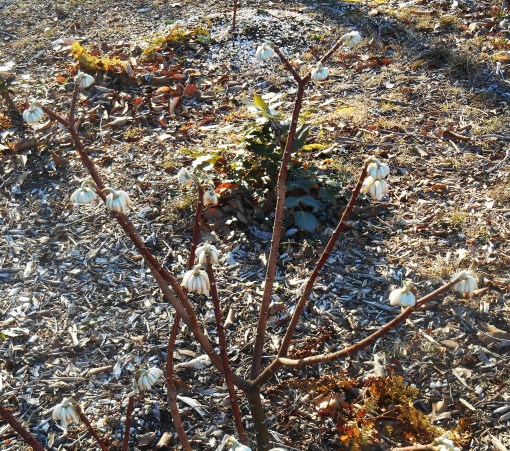 Our Edgeworthia in late February.

Elegant smooth branches glowed in the afternoon light, each holding clusters of tiny creamy flowers.  This large, sculptural shrub commanded attention in the center of a network of pathways.

Our Edgeworthia open and fragrant, now, on March 15.

This was the day I fell in love with Edgeworthia chrysantha.  We encountered one another again, only a few weeks later, at Homestead Garden Center.  They helped me find the Edgeworthia among the huge variety of shrubs in the nursery.

As much as I wanted to grow one, I hesitated.  I couldn’t visualize where it would have the correct growing conditions and place of honor it deserved in my garden.

It is a very good thing I hesitated back in April.  Little did I know then how completely a June storm would transform my front “woods”, or that I would soon have heavy equipment rolling through my yard day after day disassembling our forest.  Now the work is finished, and I”m getting used to the changes, including the change in light.

Which brings us back to Edgeworthia.

It likes a mix of sun and shade, and now it can grow well in any number of spots along the edges of the big, sunny open space where my Afghan figs will soon be growing.

Back at Homestead on Friday, when Dustin and I were looking at shrubs for the pot garden, we found three Edgeworthia left in stock.  Even better, these shrubs were grown locally  by the Patton family, and all three were healthy and beautifully shaped. 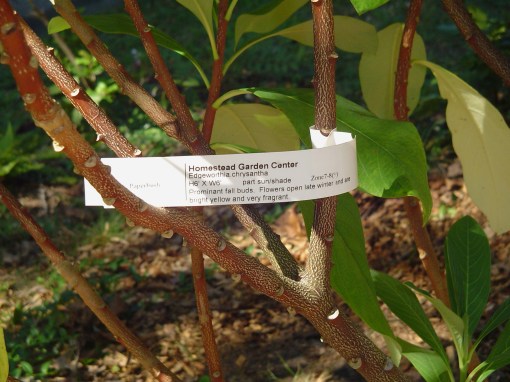 We chose one for the pot I was planting for This Century Art Gallery, and one for me to plant in our garden. 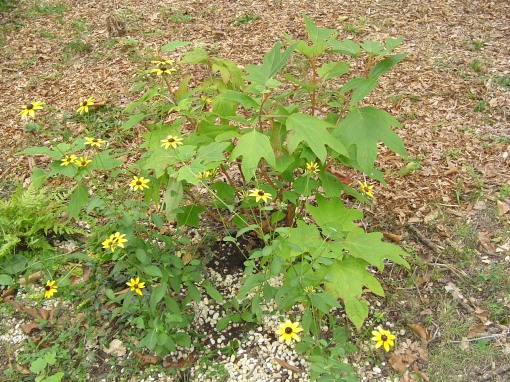 When I plant a shrub out in the garden, I generally plant it as the centerpiece of a new little garden bed.

Like constructing a quilt, I expect that one day these little islands of beauty will flow into one another to make something grand and beautiful.  It is also a pragmatic approach.

Once I learned that every part of a daffodil is poisonous, including the roots, I began planting them around every new shrub.

Daffodil bulbs, ready to be planted in a ring around the Edgeworthia.

The garden has been infested with voles since at least the day I planted the first anything in the ground here.  I’ve lost too many new plants down their tunnels, and had too many shrubs stunted by voracious gnawing on their roots to put anything in the ground without protection.  Daffodils are my insurance policy.  I plant a ring of them around everything these days.

So once deciding where the new Edworthia would be most admired and enjoyed, near the drive, and shifting that spot several times to avoid major roots, I dug a hole large enough to accommodate the shrub and a ring of daffodils.

There are so many different views on how to prepare a planting hole.  When I first began gardening, I learned, “Dig a $5 hole for a $1 plant”.  Advice was to dig an area at least twice the size of the root ball, half again as deep, and generously amend the soil with compost and fertilizer. 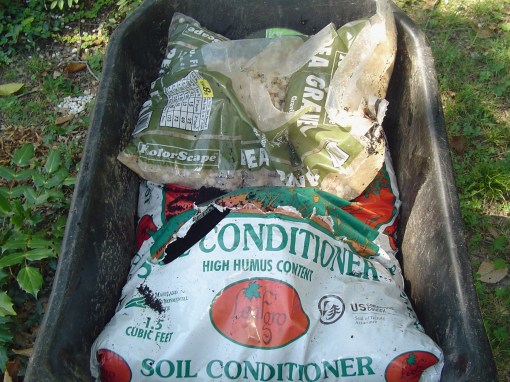 Lately I’ve read experts who say that is unnecessary, and in some cases harmful.  They recommend digging a hole just the right size, using the same soil taken out as back fill, and going lightly on the fertilizer.  I think it depends a lot on the growing conditions in your own particular garden, and also on what you are planting.

For bare root roses, I dig a huge hole, tinker with the soil quite a bit, and do all sorts of interesting things.   It can take half a day!

The many roots in this garden settle the question for me.  I dig the biggest hole I can, remove the fewest established roots I can get by with, build up a little hill of compost on top of the ground around the root ball, which is generally high, and hope for the best.   Somehow it works out.

This Edgeworthia got lucky.  The spot I finally found allowed me to dig a hole 4″-5″ deeper than the root ball, and a bit wider.  After cutting out the displaced roots, I poured in a generous serving of pea gravel, to greet the voles’ little hungry mouths, and a generous serving of Plant Tone.

All of this got mixed into the loose soil at the bottom of the hole, and then mixed again with a good bit of compost.  Just like planting a pot, I smoothed this amended soil up the sides of the planting hole, and adjusted the depth so the root ball sat level with the surrounding ground. 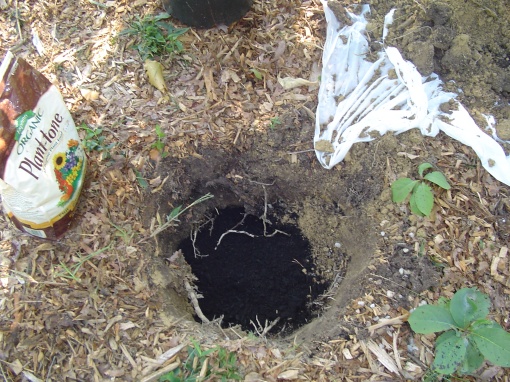 This Edgeworthia had more root growth than the one which went in the pot, and a lot of roots were showing on top of the root ball.  Since the weather is still warm, and its buds are forming, I didn’t want to shock it by pruning the roots back, but I did lift them gently away from the ball with the tip of my pocket knife.

Roots on the sides and bottom of the root ball need to be loosened before planting.

“Roughing them up” a bit is actually a good thing as it encourages new growth out into the surrounding soil.  Breaking up the roots on the bottom of the ball is as important as loosening the roots on the sides.  All of this is done in the shade, of course, and just before planting.

Gravel and Plant Tone ready to be mixed into the bottom of the planting hole.

Once the shrub was set in the hole, I added a little more gravel, and then began back-filling.

The soil that came out of the hole was surprisingly good:  a nice mix of loose clay and dark rich dirt.  I layered the soil with gravel and compost to a depth of about 6″ from the top, and then planted the first ring of bulbs.

Daffodil bulbs planted at a depth of 8″, and about 6″ apart all around the root ball to protect it from voles.

Their bottoms need to be about 8″ deep, and so each was pushed down into the loose back fill.  Once they were planted and covered, I watered the hole well to allow this much of the soil to settle and wash out any air pockets.

When the water drains, the rest of the hole can be filled, again in layers, ending with a light layer of compost covering the exposed roots on top of the root ball.  A shrub should be planted at the level it grew in the pot, but when the roots are exposed, I put a light covering of compost over them as a mulch.

Next, I circled this initial hole with a second ring of daffodil bulbs; an Autumn Fern ready to move from the pot its grown in for a year to a more spacious accommodation in the ground; and the ground cover Creeping Jenny growing with it.

I dug a fairly large hole beside the shrub for the first two bulbs and the fern, backfilling with compost and the original soil.  Then I spaced additional bulbs wherever I could dig a large enough hole, about every 8″ around the entire shrub.  All of those lovely poisonous daffodil roots will grow together to make a protective ring around the shrub’s roots while it establishes. 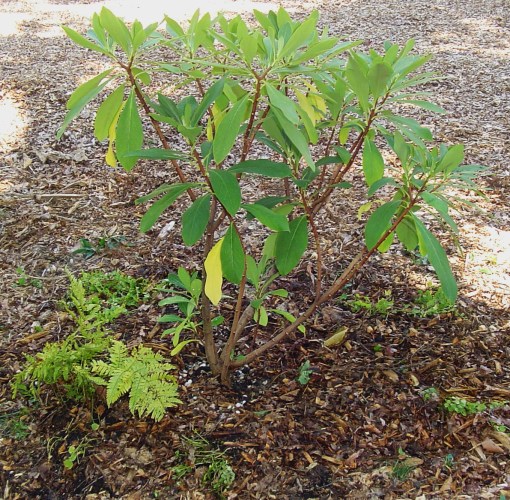 Edworthia, surrounded by two rows of daffodil bulbs, an Autumn Fern, and Creeping Jenny, will settle in for a few weeks before I add Violas and more spring bulbs around this planting.

Finally, I broke up the remaining root ball of Creeping Jenny,  put hunks of it on top of the outer ring of bulbs, and covered the whole outer ring with additional compost.

Now,  this is a totally unorthodox planting method- planting on top of the ground.  But it works.  Creeping Jenny are very tough.  They root from every leaf node along the stem.  I’ll keep this watered until they take hold, and soon they will form a beautiful chartreuse ground cover around this entire area.

After watering everything well one more time, I left the new planting to settle.  In a few weeks, I’ll come back with 6 packs of violas and small bulbs of Grape Hyacinths, Crocuses, perhaps some Siberian Squill; and develop the area around the shrub a bit more.  By the end of October, this entire area along the drive will be planted in violas ready to bloom their hearts out all winter and into next spring.

The buds are growing in late December. The plastic box is full of deer repellant, our insurance that we would get to see the blossoms open in spring. 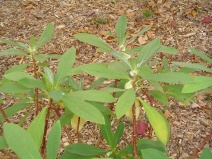 Edgeworthia in late February, the blossoms continuing to grow. 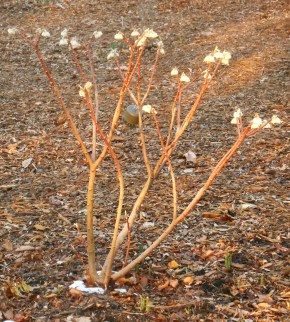 Early March, blossoms are not yet fragrant.

March 15, notice the golden bell like structure to the flowers, now opening.

Our Edgeworthia open and fragrant, now, on March 15.

Our Edgeworthia in late February.

3 responses to “Edgeworthia in the Garden”