Only Two Months Away

Although it’s hard to imagine on this cold February day, with skies low and white; we are only two months away from our frost free date of April 15.

Two months:  eight weeks:  maybe 56 days.  April 15 is the published “frost free” in our part of Virginia, here in Zone 7b.  Mid-April is the earliest for us to move tender annuals and perennials back outside to start the summer garden.

The last few winters have been so mild, tomatoes and herbs have shown up at the big box stores by mid-March.  Most gardeners know that vegetable plants set outside before the weather settles can get stunted from the cold, but they are very hard to resist. 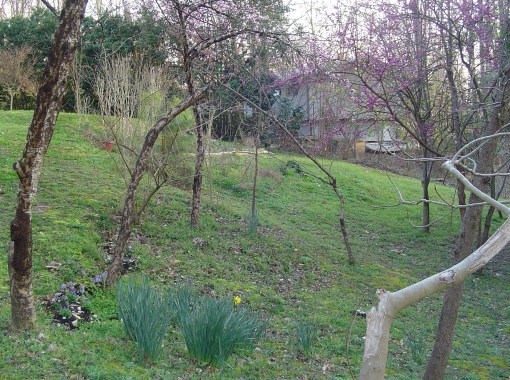 Our friends, the Pattons, over at the Homestead Garden Center, try to explain to eager gardeners each spring that one must wait until the weather warms to set out tomatoes, cucumbers, squash, and Basil.  It seems many of us want to get ahead of the season and plant as early as we can.

It is important to wait until the soil warms up considerably before planting anything in the ground.  We also need to wait for the soil to dry some, after all of this winter rain and snow, before working with it to prepare beds for planting.  Working with garden soil when it’s too wet will compact it, which makes it hard for roots later in the season.  The soil will have a much different texture once it warms and dries out a bit. 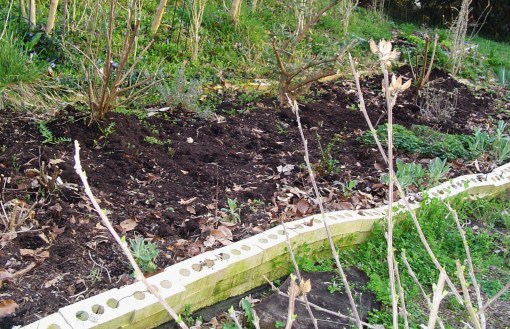 Butterfly garden in mid- March 2012, trimmed, weeded, and with a fresh topping of compost.

Last year, with a beautiful warm and early spring, I began planting pots and baskets way too early.  We got some late cold weather, and I had to haul all back inside the garage; more than once.  At least nothing got frost bitten, but I did try to rush the season.  It is so hard to be patient once we get a whiff of spring!

An early March planting of Ranunculus and Alyssum, both able to stand up to cold, but not freezing temperatures.

There are things we can do to get a jump on the season, even when early spring still feels like winter.  Here are gardening tasks I’ll begin working on during the rest of February and into early March:

1.  It is time to look over the various pots, baskets, tools, soil, and seed starting equipment left from last season.  We can inventory, clean, organize, and make a shopping list of what we need to begin the gardening year. 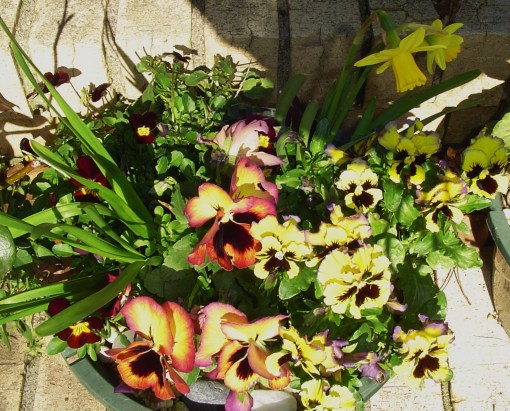 Pansies will soon respond to wramer days and nights with renewed growth.   Here with miniature Daffodils.

2.  By now, I have a pretty good idea of what I want to grow this spring.  With no orders yet placed, it is time to get busy ordering seeds, tubers, and plugs.  Seed displays will show up soon in many stores, and always tempt.  This is a good time to look through any packets left from last season, and decide what needs to be purchased.

3.  Most seedlings started indoors need about 6 weeks before they are ready to acclimate to the out of doors.  That means we can begin planting them indoors most any time now.  It is important to have strong light for seedlings.  We either need good space near a window or a set up with lights so they grow stocky and compact.

4.  Caladium tubers can also be planted this month indoors.  I plant them in plastic shoe boxes.  Line the shoe box with paper towel to wick the moisture evenly through the soil, and add about 4″ of good potting mix.  Plant each tuber, eyes up, shallowly so it is just covered, and water in .  Space tubers at least 2″-3″ apart, depending on the size of the tuber, to allow for root growth.  Cover the box with the lid, and put it somewhere warm and out of the way.  Begin checking for growth after the first 2 weeks.

Once the Caladium leaves begin to grow, uncover the box and bring it into the light.   Plant individual Caladium plants into their permanent pots, or into the ground, once they have at least one leaf.  Caladiums do best if kept warm inside until late April or early May.  They grow best when nights stay above 65F.  Caladiums, ordered in bulk from growers in Florida, can be had for around a dollar a tuber.  Purchased at the garden center in leaf, they cost many times that.

5.  Although its too early to work the soil, one can spread a fresh layer of compost of top of established beds.

Rose of Sharon should be trimmed back now to remove last year’s seed heads and twiggy growth. Blooms come on new wood.

6.  It is also time to tackle winter pruning.  Once we have several days in the 40s, and several nights in a row that don’t freeze, I’ll oil my pruning shears and head out to work on the Rose of Sharon, Crepe Myrtle, roses, vines, and fruit trees.  I will still wait to cut back the Lantana until after the first of March.  With our very cold winter, it is hard to know whether many survived, but I’m going to give them a better chance by waiting a while before cutting them back.

7.  I want to trim back the Hellebores.  All of the leaves left from last season need to come off so the new growth and flowers can shine.  Those old leaves are poisonous, so it is important to wear gloves when trimming them back.  They can be recycled as a mulch in areas plagued by voles.  As they break down in the soil, the poisonous compounds will settle in the soil as well.

8.  Winter has been very hard on my pots this year.  Many Violas look hopelessly ratty, where they have frozen repeatedly, and browned in the sun when the soil was frozen.  I need to do a lot of cutting back and cleaning up to make the pots look presentable, and replace  a few of the Violas with fresh ones.  Bulbs are beginning to poke up through the soil, and I want the pots to look good as they begin to bloom.

9.  Pots of summer flowers stored over winter in the garage are getting leggy.  It is time to cut them back, and pot up the cuttings so they can root before I want to set them outside in mid-April.  Scented Geraniums, Begonias, Fuschia, and Coleus will all grow easily from cuttings.

Tuberous Begonias may be started in plastic boxes in the same way as Caladium tubers are started. Started by late February, they are ready to plant outside in late April. Blooming here in June.

10.  It is nearly time to plant cold hardy herbs and spring vegetables.  Parsley is one of the earliest herbs we can plant out doors.  It can stand up to snow and freezing nights fairly well.  We can also plant seeds for peas, sweet peas, spinach, and a few other vegetables within the next few weeks.

Parsley can grow outside all winter long in our area, and is the first herb to plant in spring.  Growing here with chives and Violas

11.  We need to do a spring clean up of leaves which have fallen or blown into the garden this winter.  They lurk on the patio, in borders, and on the lawn.  One dry day in the 60s I’ll head out with a rake and leaf blower to tidy up.  I reverse the blower to suck the leaves up and mulch them.  The mulch then gets added to the soil under shrubs.

12.  It is finally time for our first spring trip to the Homestead Garden Center to see what has come in.  Joel Patton has been growing a crop of English Primroses in his greenhouses, and they are already available along with  overwintered Violas.  I hope to find Ranunculus, and an early selection of perennial starts.  We found great deals on perennials and ferns in little 2″ pots last spring.   Early spring is the second best time to plant trees and shrubs so they can establish their roots before the heat comes in May.   It must be a long and lonely winter for those in the nursery trade, and we look forward to a visit one day soon…. when it’s not snowing.

At the moment, the rain has turned back to snow outside my window, and the temperature is plunging back down towards another night in the 20s.  It feels quite wintery here today.  But we know that it can all change overnight.  As the jet stream returns to its usual northern route and the clouds blow out to sea, the sunshine and warmth will return one day very  soon.

I plan to be ready to greet spring when it finally settles back into the garden. 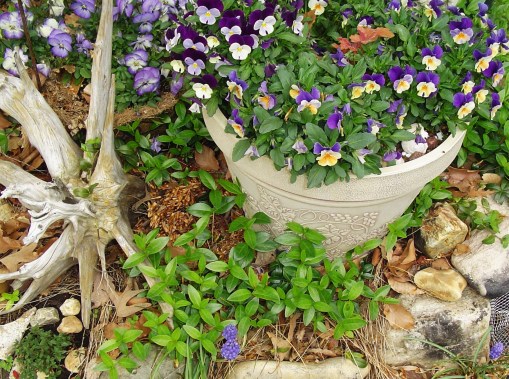 I order Caladium tubers from Caladiums For Less, and am delighted with their product and service.

6 responses to “Only Two Months Away”