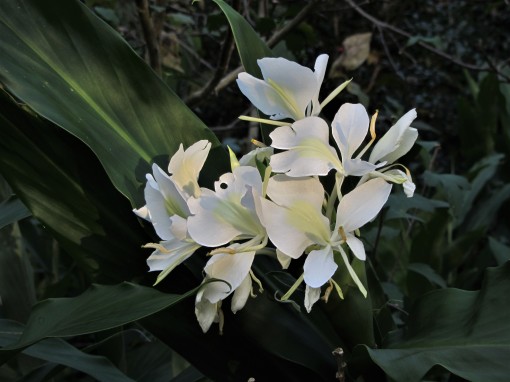 Soon after we moved to this home, we met a wonderful neighbor who had surrounded her home with flowers.  She has giant azaleas grown from cuttings, a sea of bulbs in spring, and near her back porch, a patch of ginger lilies. 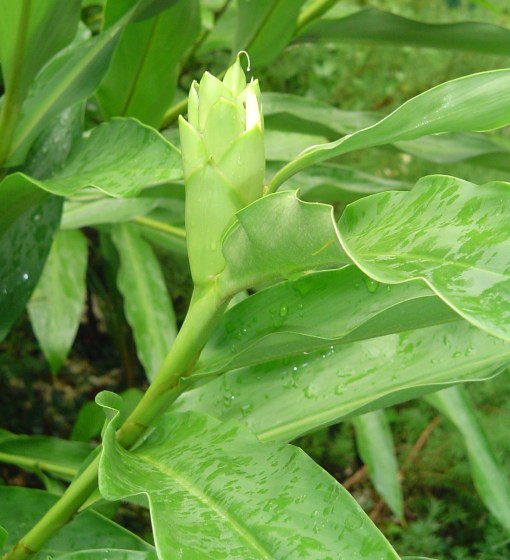 When she decided the time had come to move, she offered me the opportunity to come and dig some of her lilies.  Now, never one to turn away from the opportunity to grow a new type of plant, I happily accepted her invitation, even though I was clueless as to what a “ginger lily” might be.

These “pineapple” shaped buds will begin to open any day.

Our friend offered a few bits of information:  the deer leave it alone, it blooms with sweet smelling flowers, and it is a very tough, hardy plant.  Enough said.  I grabbed a trowel, a container, and followed her across the street.

This was in the early spring, before these beautiful monsters had sent up their stalks.  I got the impression it might be similar to a Canna lily from the remains of the previous season’s plants and the large rhizomes as we began to dig.  She was very generous, and gave me quite a few roots.  Her only advice was to plant where they can get sun.

Ginger lilies in the second week of June.

What an amazing gift these lilies have proven to be.  Ginger lilies aren’t true lilies at all, which is wonderful, since in my neighborhood true lilies are simply deer candy.  A member of the ginger family, these plants are native to Asia.  The particular variety she gave me, Hedychium coronarium, are also called, “White Butterfly Lily”, as the 2” flowers look a bit like a butterfly.

They are great favorites of butterflies and hummingbirds and smell particularly sweet.  I’ve even had a butterfly land and feed on the very flower I was sniffing!

Ginger lilies get a late start in spring, breaking dormancy with new growth in May, here in Zone 7b.  They grow throughout the summer, getting taller and taller every week, until by mid-August they are between 5’and 6’ tall.  Their first flower of the summer opened this week.  The lilies will continue to bloom into October at least, depending on the weather, and will die back to the ground after a few hard frosts.  I generally leave the brown stalks and foliage in place, as mulch, through the winter.  A more fastidious gardener would probably go and cut it all away in December or January, but I leave it as an extra layer of insulation for the roots in case the winter is colder than usual.

After cutting back the remains of last year’s stalks in mid-spring, and clearing away the last of the leaves blown in over the winter, I spread an inch or two of compost over the whole bed.  The ginger lilies are an excellent “back of the border” plant, and I have roses, Lavender, Rudbeckia, Salvia, and some low annuals growing in front of them.

Ginger lilies spread as their underground rhizomes and root system expands each season.  They eventually form huge clumps, and should be spaced, originally, at least 18”-24” apart.  Some varieties grow aggressively, and my beautiful “White Butterfly Lily” is considered invasive in Brazil and Hawaii.  It is the national flower of Cuba, where it is called, “White Moth Flower”.

There are numerous species and cultivars of ginger lily hardy in zones 7-10.   Most have yellow or orange flowers, and many cultivars have a much larger head of flowers atop the stems.  Some begin flowering much earlier in the summer.  For a good list of cultivars and photos, please visit Plant Delights Nursery, based near Raleigh NC.  This is an excellent mail order nursery and offers very personal customer service.  Their website is especially helpful in finding plants to fit into specific situations, like plants that won’t be devoured by your local herd of deer. 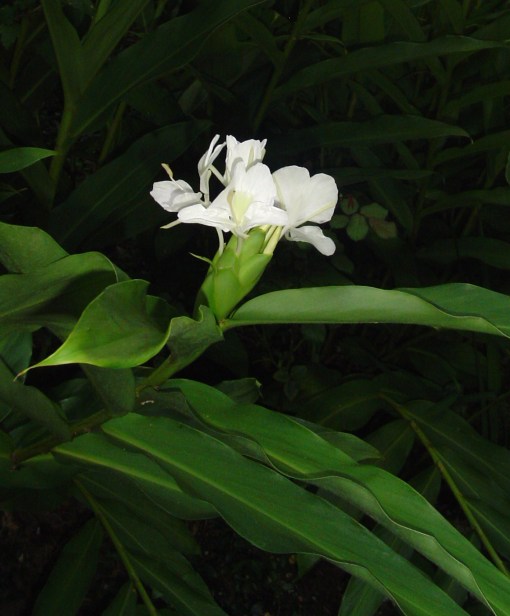 Ginger lilies will grow in a variety of soils, but of course do better in rich, well drained soil.  They prefer moist soil, especially the first year or so as the tubers establish, and should be watered when there isn’t regular rain.  Ginger lilies need full sun, or at the least very light shade, and they need plenty of room to spread.  These are large, bold plants and most cultivars will cover a large area in just a few years.

Our  patch of lilies has grown to the point that I should thin and divide them this spring, especially as they creep into the roses.  Little did I realize, when I was blessed with such a generous gift of rhizomes, how very “dear” these little gems are on the market.  Most retail for around $20 per plant, plus postage.  I hope that friends will remember my intention to divide when spring rolls around again, and will remind me to pass along and share what was so generously shared with me.