Sweet Autumn Clematis is in full bloom now along the Colonial Parkway between Williamsburg and Jamestown, Virginia.

It’s late August in Virginia, but along the banks of the James River it looks like there has been an early snow, dusting the trees and shrubs with white frosting.  The Sweet Autumn Clematis is in its glory. 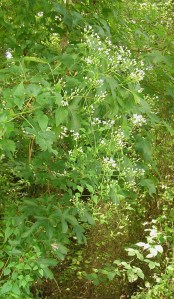 The smooth oval leaves on the Sweet Autumn Clematis vine indicate it is the Japanese Clematis terniflora, not the native species.

There are actually two different Autumn Clematis species, which look identical from a distance.  The native Clematis virginiana, also called “Virgin’s Bower”, or less romantically, “The Devil’s Darning Needles”; grows from 10’-20’, blooms from late July into September, and has leaves with toothed edges.  It grows in USDA Zones 4-8, and was widely used by Native Americans medicinally and as a hallucinogen.

Clematis terniflora was imported to the United States from Japan.  Although the flowers of these two vines are nearly identical, Clematis terniflora has smooth, oval leaves and can grow to 30’.  The “sweet” in the common name, “Sweet Autumn Clematis” is a reference to the delicious sweet aroma of this beautiful vine.  It is hardy in zones 4-9.  Although it is naturalized mostly from Texas eastwards in the United States, and up into Quebec, Canada, it has also naturalized in much of California.  The foliage of this vine is more refined looking than the foliage of the native Clematis virginiana.

Both of these vines are popular with all nectar loving insects and with hummingbirds when in flower, and with seed loving birds once the seeds form.   The seed is spread far and wide by the birds, and so both of these tough, vigorous vines are now found growing in the wild across most of the Eastern United States.  Sweet Autumn Clematis is also a favorite to grow in the garden.  It comes into bloom at the end of the season when many annuals are tired and many perennials are finishing their annual display.  Some states list Sweet Autumn Clematis as an invasive species, although that is harsh treatment for such a beautiful flowering vine. 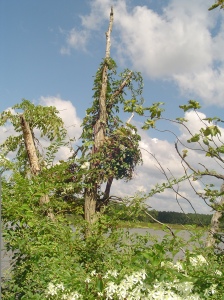 Both species of Autumn Clematis tolerate a wide range of soils.  They can thrive whether the summer is wet or dry, although our prolific display this August must be due to the wet weather we’ve had all summer.

Both flower on new wood.  They can be cut back hard, to within a foot or so of the ground in early spring, and still put on enough growth for a beautiful autumn show.

These clematis vines are lovely growing on a fence, an arbor, as a groundcover, or over shrubs.  Caution should be taken when they begin to scamper over nearby trees and shrubs in the garden so they aren’t allowed to “shade out” and weaken their neighbors.  The elongated petioles of the leaves twine around any available support as the vine climbs.  Clematis terniflora will grow as much as 20’ in a single growing season after a hard pruning. 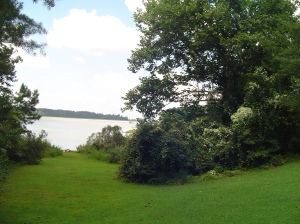 Vines of Clematis virginiana can be grown from seed or cutting, but cuttings are preferred to propagate Clematis terniflora.  Layering is the easiest method, although cuttings with at least two pairs of leaves can be rooted in moist soil.

Although I’ve planted Sweet Autumn Clematis in my gardens over the years, it is most exciting when it suddenly bursts into bloom in the wild.  There is a special energy and excitement when the green vine, growing on green shrubs, suddenly bursts into bloom with its snowy white blossoms.  Butterflies, bees, and hummingbirds flock to its sweetly scented nectar filled blossoms.  What a beautiful way to begin the long good bye to summer.

All photos by Woodland Gnome 2013

The view across the James River to Surry County, from the Colonial Parkway.

6 responses to “Like A Dusting of Snow: Sweet Autumn Clematis”