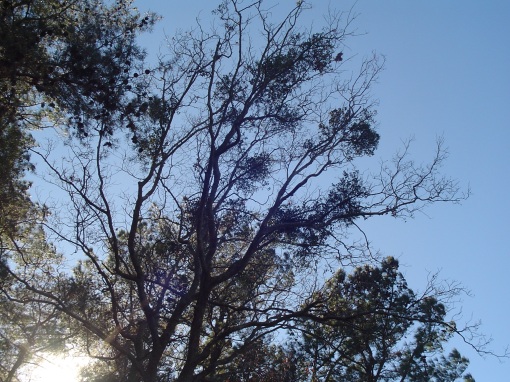 Mistletoe lives in the branches of this tree along the banks of the James River.

We gardeners spend so much of our time out of doors looking down.  We look down to check the progress on our beds and borders, to water our pots, to plant, to generally keep an eye on new things in the garden.

This day I made a conscious decision to look up.  It is a gloriously sunny day with a clear blue sky, no humidity, and few clouds.  Knowing a storm is on the way for midweek; I set out, camera in hand, to enjoy the beauty of the day.

And what a perfect day it’s been for looking up.  Strong winds have stripped most of the leaves away, leaving the trees’ sculpted skeletons shining in the sun. 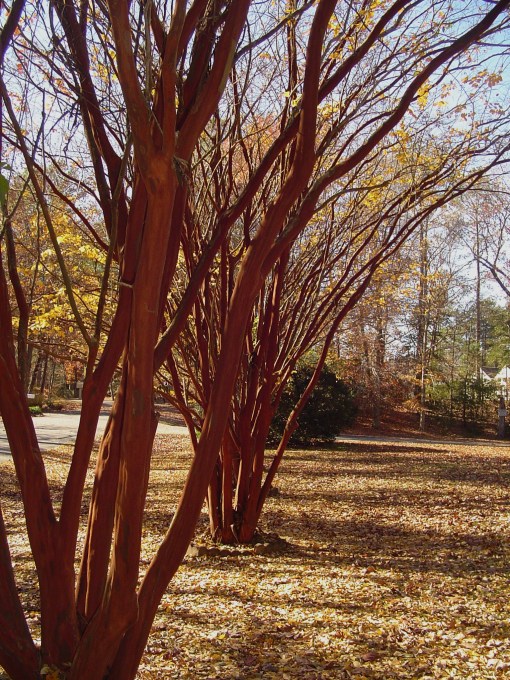 A row of Crepe Myrtles stands near College Creek.

What a striking sight:  trunks and branches revealed once again, the living mathematics of their branching no longer hidden amongst their leaves.  The beauty of bark revealed in all of its silvery, marbled, textured variety.

Looking up, I was happy to see lively green clusters of mistletoe shining in the tree tops.  These special, evergreen, plants have been a part of myth and folklore since ancient times.  They live, suspended, between heaven and Earth; rooted into the branches of hardwood trees. 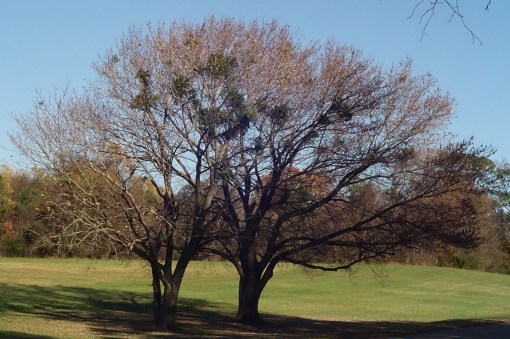 Mistletoe lives peacefully in this pair of trees along the Colonial Parkway.

Sacred to the Norse goddess Frigga, European mistletoe, Viscum album, was harvested at the summer and winter solstice by the Druids using a golden sickle, and never allowed to touch the ground.  It has been used, along with other evergreens, to decorate for the winter solstice celebrations for millennia.  Its mythic associations with masculinity and fertility, and with marriage, have earned it a prominent place in “kissing ball” decorations, hung from doorways and chandeliers.  Couples kiss under the mistletoe to seal engagements, cement friendships, make up after arguments, and often to begin new relationships. 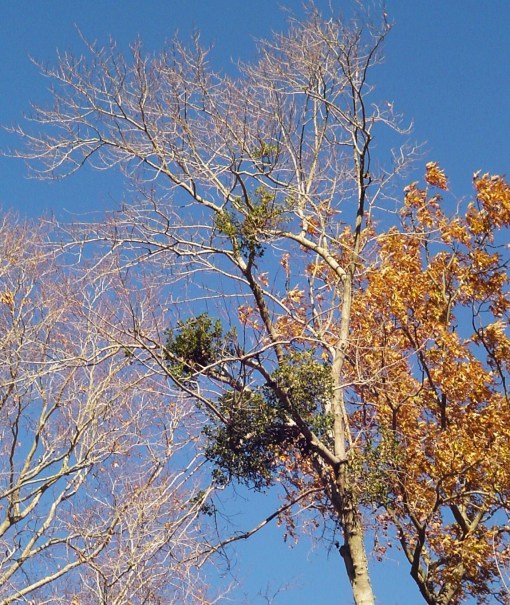 Mistletoe growing in our garden is a welcome sight. We are happy for its presence and look forward to finding branches blown to the ground.

Our North American mistletoe, Phoradendron serotinum, looks similar to European mistletoe, but is a different plant with larger clusters of white berries.  Both live high in the branches of trees, and both are semi-parasitic.

Both European and American mistletoe begin life as a seed, deposited on a tree branch by a bird.  The mistletoe berry contains a very sticky juice.  Whether the seed is rubbed off of a bird’s beak onto the branch as the bird eats, or is deposited in the bird’s droppings, the juice surrounding it cements it to the bark until it has the chance to germinate. 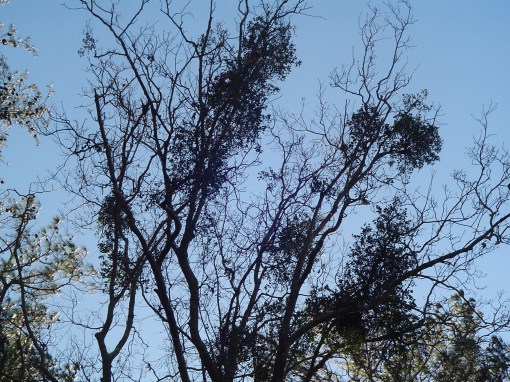 Instead of roots, the new plant sends out haustorium, a type of aerial root, which penetrates the bark to grow into the wood to both anchor the mistletoe plant and absorb water and minerals from the host.  The evergreen mistletoe produces its own food from sunlight, as does every other plant.  It relies on its host for water, but not for food.

A large colony of mistletoe can weaken a tree over many years, and can disfigure the branches.  But in general, the host and guest can live quite peacefully together for a long time.  In fact, research has shown that the presence of mistletoe actually increases biodiversity in woodlands where it is found.

The plant provides food and shelter for numerous birds and insects.  In fact, some species of birds create their nests in mistletoe clusters.  They eat both the berries and the young leaves and shoots.  When mistletoe blooms in the spring it provides nectar for a variety of insects. 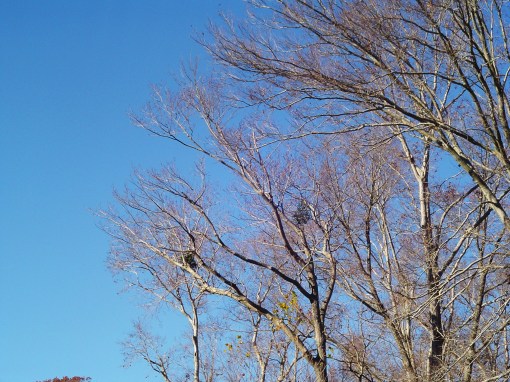 Mistletoe is not something that a gardener plants.  I am always very happy to find it growing nearby, as though it is a special blessing of nature.  Sometimes pieces of it get knocked down by strong wind or a falling branch.  I always collect this and take it inside. People living out in the countryside sometimes try to shoot down clusters with a rifle to sell at Christmastime for decoration.

The only way to remove mistletoe from a tree is to prune the branch on which it is growing.  Since it won’t kill an otherwise strong and healthy tree, there really is no need to do this.  And, clusters of mistletoe add their own special beauty to a tree’s bare branches during winter.  Found all over Europe, North America, and Australia, there are also species of mistletoe which live in tropical and subtropical forests.  It is another beautiful plant in our forest garden. 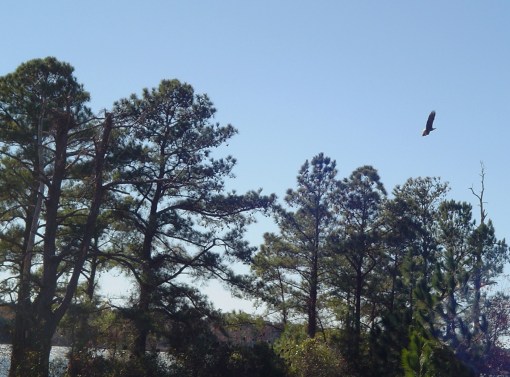 A bald eagle near his nest along the James River.

While looking up at the tree tops this afternoon along the Colonial Parkway, we also spotted a bald eagle hovering over its nest.  By the time we stopped the car and I got out with the camera, he had taken off, alarmed, and was circling nearby.  I managed to catch a single photo before he took off across the road towards the marsh.  We saw several eagles today, a few hawks, and lots of gulls. 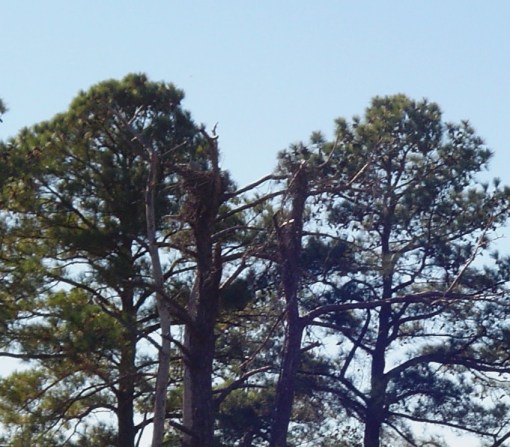 A closer view of the nest, which was full of young in early summer.

The gulls are gathering inland again ahead of the winter storms coming later this week.  As sometimes happens, a huge icy system is coming from the west at the same time another storm system is swooping down from Canada.  It looks like they will meet over the Carolinas and Virginia by Tuesday, and then rush up the coast. 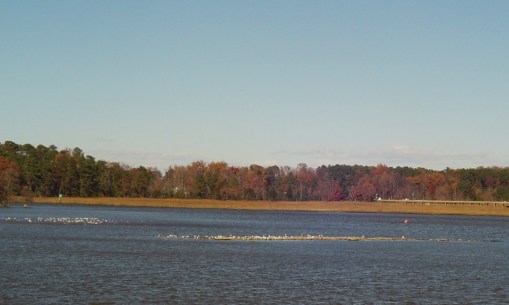 Gulls have flown inland ahead of the coming winter storms.

We already have January like temperatures in place, with a high here today in the mid-30s.  It was the first day I reached for my hat, gloves, and scarf before heading outside, and the howling winds made it feel much colder.  I filled the camera today, hoarding photos like cans of soup.

The rest of the week might not be the best weather for wandering the garden taking photos.  But today has been a lovely day in Williamsburg, a beautiful wintery day, and a glorious day for “looking up.” 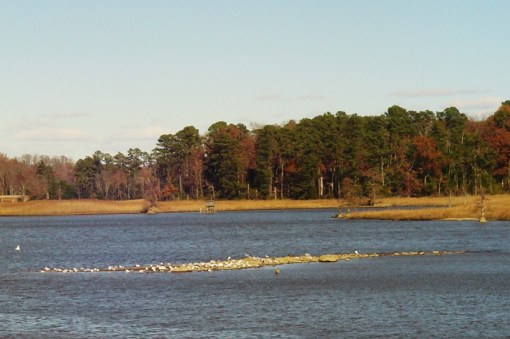 “If you concentrate on finding whatever is good in every situation, you will discover that your life will suddenly be filled
with gratitude, a feeling that nurtures the soul.“

All Photos by Woodland Gnome 2013

10 responses to “Looking Up… Mistletoe”