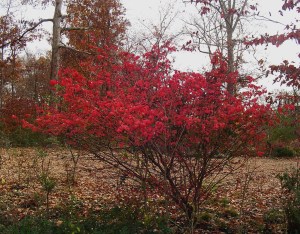 The burning bush in our front border

A neighbor’s garden has several mature, beautiful Euonymus alatus shrubs near the street.

“What is that red bush?” we wondered, our first autumn in our new neighborhood.  We spotted brightly scarlet shrubs all over the neighborhood on our walks, including a huge one in our own front border.  This was such a beautiful attention grabbing plant, and we were both unfamiliar with it.  We enjoyed the bright leaves and the tiny red seeds, much loved by our birds.

We noticed the leaves beginning to change in October, and for a few short weeks the shrub became the brightest thing in our garden.  By mid December the leaves had blown away, leaving only berries still clinging here and there to the branches.

A neighbor’s Burning Bush has already lost most of its leaves.

We now have a total of six of these bright shrubs in our front garden.  One is large and broad and dominates the border.  The others are much, much, smaller; still struggling for existence against the appetites of ravenous deer.  We’ve realized that if a shrub can survive long enough to grow taller than the deer can reach, it has a chance at survival.

This shrub, brought to the United States from Asia in the 19th century for its beautiful fall foliage, is known as Euonymus alatus.  Native to northeastern China, Japan, and Korea, it has naturalized in parts of the United States.  Commonly known as “Burning Bush”, it is closely related to Euonymus Americanus, which is also known as, “American Strawberry Bush.”  Both have beautiful red foliage in autumn. 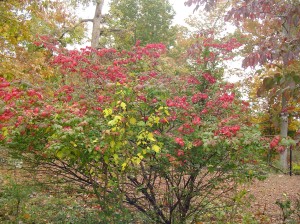 This photo of our burning bush was taken November 2, when it was beginning to color for the season.

Euonymus Americanus has large red fruit capsules, which somewhat resemble a strawberry before they split open to reveal the red seeds inside.  Native to the southeastern United States from Texas to New York, this shrub is an understory plant in woodlands, and grows smaller than Euonymus alatus.  Topping out at only around 6′ tall, its growth is often described as spindly.  It is nice in a naturalized setting, but is not a sought after ornamental shrub.

Euonymus alatus can grow up to 20′ tall according to some sources.  It is usually wider than it is tall.  Our largest shrub is very “leggy” at the bottom, and only widens out to a full shrub several feet off of the ground.

One of our “volunteer” burning bush shrubs, is surviving despite frequent grazing from the deer.

That may be due to deer nibbling rather than the shrub’s natural habit.  Although this shrub has beautiful fall foliage, and is still available for sale at nurseries, it is considered an invasive plant in many states in the Northeastern United States.  Because its seeds are popular with birds, it gets sown far and wide.  In fact, I suspect that all of the specimens in our garden began as volunteer seedlings which have survived.

Burning Bush grows in full sun to partial shade in neutral, to slightly acidic humus rich soil.  They like moisture and grow much better when the soil is constantly moist.  Their new leaves and flowers appear in spring, but the flowers are barely noticeable.  The shrub blends in and is unremarkable for most of the season.  Only when the leaves begin to turn scarlet does it draw attention to itself.

Close up of the foliage of an Euonymus alatus.

Burning Bush is the sort of volunteer shrub which tends to colonize disturbed land and the edges of woodland.  Since it is easy to grow, it often forms dense thickets as seedlings grow up around the original shrubs.  It needs no specific care other than some pruning.

In fact, it is a poor choice to grow near drives or walkways since it can eventually grow to 15′ wide, or more.  Some homeowners with mature shrubs find that it needs frequent pruning to keep it in bounds, and then it looks rather awkward.

Dwarf cultivars are available on the market now.  This shrub is not yet considered an invasive plant in Virginia.  If you love scarlet autumn foliage, you might consider planting this shrub in your garden.  We certainly enjoy ours, and I would be happy to have more turn up in our naturalized areas.  Their bright red foliage is still very cheerful, as so many of our other leaves have fallen, leaving thickets of bare branches.

Here are some other trees and shrubs which sport bright red foliage in autumn in the Williamsburg area, just in case you’re still trying to figure out for yourself, “What is that red bush?” 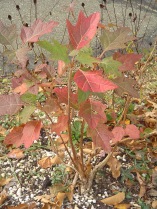 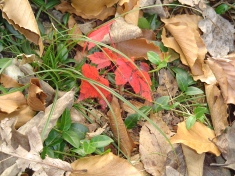 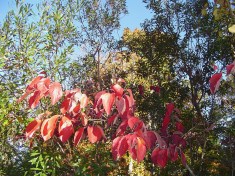