North America’s trees were considered one of its greatest treasures both by European colonists like John Bartram and his son William, and by European gardeners eagerly awaiting shipments of seed from ‘the colonies.’

Our many varieties of conifers and hardwood are as beautiful as they are useful.  North American trees were planted extensively in European gardens soon after Jamestown was settled.  The early colonists were always on the lookout for ‘useful plants’ to send back home.

The American Sycamore grows on the bank of Jones Millpond in York County, Virginia

One of my favorite native American trees is the American sycamore, Platanus occidentalis.   Also called ‘bottonwood tree,’ named for its round fruits which persist through winter, the sycamore may also be called an American plane tree.

I particularly like this tree’s mottled, light colored bark, and its beautiful branching form.

The sycamore prefers moist soil and can often be found in the wild in lowlands and near bodies of water. Yet it will grow in many different environments in Zones 4-9.  It’s native range extends from Florida, north into Canada, and westwards into Texas and Oklahoma.  It is also considered a native tree in Oregon.

The sycamore will quickly grow into a massive shade tree, with a thick trunk (to more than 6 feet in diameter), a broad canopy, and a mature height of over 130 feet.  Its extensive roots can damage nearby walls or sidewalks, yet it is a common street tree in cities.  A sycamore can handle the heat and polluted air of urban areas, where it is enjoyed for its beauty and its shade.  Its dense canopy helps filter the air. 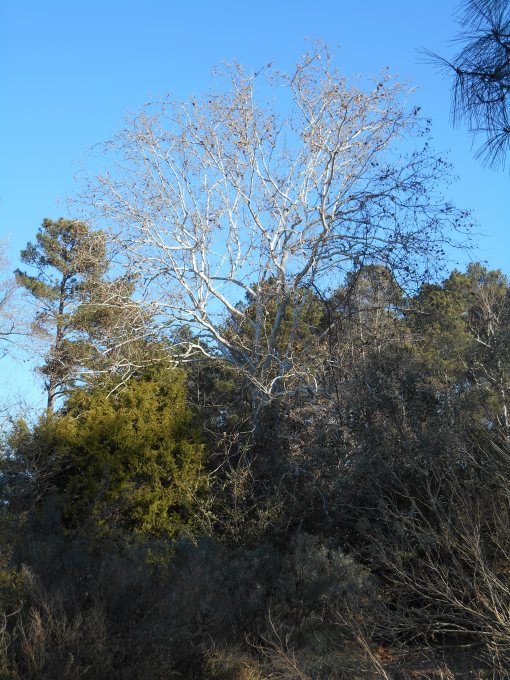 This Sycamore grows on the banks of the James River near Jamestown Island.

I enjoy visiting this lovely sycamore growing on the bank of Jones Millpond, alone the Colonial Parkway between Williamsburg and Yorktown throughout the year.  It is pleasing in all seasons.

There are several notable sycamore trees in our area.  Their interesting branches and bright bark make them easy to recognize.  In winter, the seedpods hanging from their branches playfully sway in the wind.

A sycamore tree’s wood is useful for making things, but it isn’t a preferred wood for furniture making.  It doesn’t produce edible nuts or leaves.

It is valued more as a beautiful landscape tree and for the shade it gives in summer.

The sycamore ranks high among my favorite native American trees.

Even when pruned hard in a style called pollarding, the Platanus is easily recognized by its light colored bark. This tree grows in Colonial Williamsburg.