Locals in our area enjoy the spectacular early summer bloom of naturalized “Yorktown Onions” as they drive the Colonial Parkway between Williamsburg and Yorktown.  Thousands of brilliant magenta flowers nod and bob in the breeze from late May through mid-June.

The National Park Service leaves broad areas along the roadsides unmown each spring, so that these distinctive flowers may grow and bloom, surrounded by beautiful grasses.   By late June, these stands of wildflowers will be gone; the fields and grassy shoulders neatly mown once again.

The battlefields at Yorktown also hold broad swathes of these beautiful Alliums in early summer, to be followed by a steady progression of wildflowers, including thistle, as the months pass.  These historic Revolutionary War battlefields, now wildflower meadows, escape the mowers until fall.  But you’ll often see herds of deer grazing here in the early morning and at dusk, and clouds of wild birds feeding as the various seeds ripen.

If you’re visiting, please resist the urge to pick or pull the onions.  York County passed an ordinance protecting the Yorktown Onion many years ago.  They may not be picked or harvested on public land.

But these are a quintessential ‘pass along plant.’   If you’re lucky enough to know someone growing them on private property, you may be able to beg some seeds or sets to start your own patch. 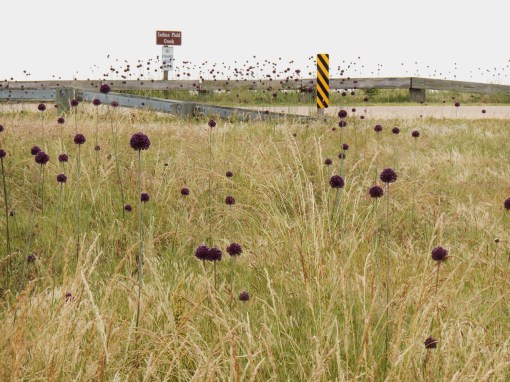 I believe we make more drives along the Colonial Parkway when the onions bloom each year.  We marvel at their wild, random beauty.  Their tiny blossoms prove magnets for bees and other pollinators.  The Yorktown Onion is one of many beautiful wildflowers visitors enjoy along the Parkway each summer.

Native in Europe and in parts of the Near and Middle East, historians suggest that seeds were brought to Yorktown during the Colonial or Revolutionary eras.    These particular Alliums are one of many Allium species you might choose for your own garden.  The Yorktown Onion, Allium ampeloprasum, may be purchased from Brent and Becky’s Bulbs  in Gloucester, along with more than 30 other Allium cultivars.  The Yorktown Onion, like other Alliums, wants full sun.  They are drought tolerant and hardy in Zones 4-8.

Also known as ‘wild leeks’ or ‘wild garlic,’ these beautiful flowers are exceptionally easy to grow.  Basically, plant them where they’ll thrive, and then leave them alone!  They don’t like to be disturbed, and will gradually increase to a more substantial display each year.

The Heath’s grow their onion sets from seed, thus the dear price they charge for the “Yorktown” Alliums in their catalog.  If you want the general effect, without the boutique pricing, you might try the very, very similar A. ‘Summer Drummer.’  This nearly identical tall (4′ +) burgundy Allium may be purchased in groups of 5 bulbs for the same price as a single Yorktown Allium bulb.

Allium bud as it begins to open in our own garden, June 1 of this year.

If you want something a bit shorter and less likely to fall over with the weather, consider planting chives, garlic chives, or even just onion sets or garlic cloves bought at a farmer’s market or the produce section of your grocery.  You might be a bit surprised at what beautiful flowers show up in your garden!

Chives thrive in our garden.  The clumps expand, and their seeds readily self-sow each summer.  Use them in cooking and enjoy their edible flowers as garnishes.   Dried Allium flowers look very nice in dried arrangements or used to decorate wreathes or swags. 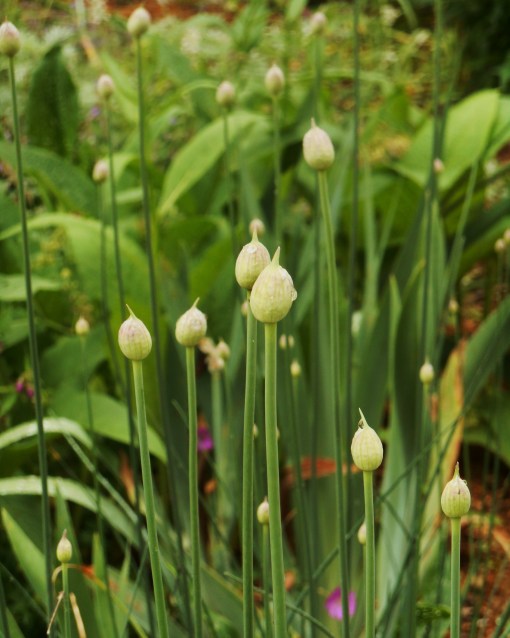 Allium buds in our garden, late May

I began planting Alliums to protect other plants from hungry deer.  I’ve learned that their strong fragrance can confuse the deer nose, and possibly deter deer from reaching across them to nibble something tasty.  Like other deer deterrents, Alliums work often, but not always, to protect the garden.

That said, why not grow Alliums for their own special beauty?  It is one of the short list of plants with a fairly iron-clad guarantee to not be nibbled.

We stopped along our drive yesterday evening at Jone’s Millpond to enjoy the view and the wildflowers.  It is one of the few places along the Parkway where you may park and get an up-close view of the Yorktown Onions.  Even at dusk, the bumblies were busily feeding on the tiny flowers which make up each globe.

There is something about seeings hundreds, or thousands of these flowers naturalized across a wild field, that mesmerizes.  This is an effect it would be difficult to duplicate in one’s own garden.

The journey is the destination…. 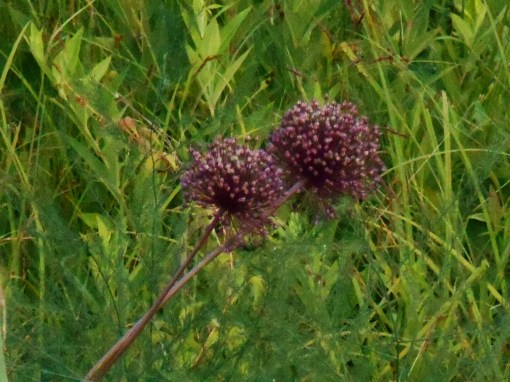 Never a second of stillness or rest; every particle of our lives from the most distant star to the tiniest electron in our heart, remains dizzily spinning its dance of life.

And so it is with every bird and fish, every drop of water, and everything green and growing.

Our only response remains to dance along with life. 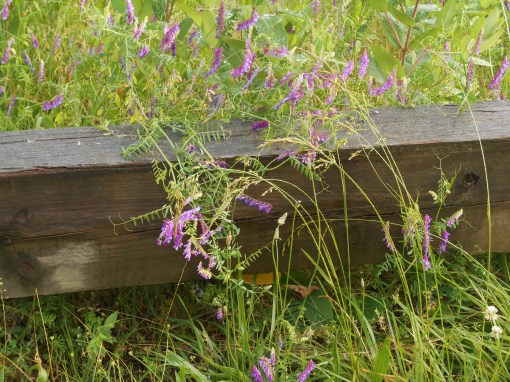 Some may wish to grasp the moment and hold it still; to stop time, if only for a little while.

But if we ever succeed, we find that moment opening into a doorway to the deeper layers of life.  We pass through to some wider knowing, some greater vision.  But we remain in motion along the winding path of our being.

And so we become ‘Lords and Ladies of the Dance,’ flowing along with the worlds we shape.

We hear the humming of insects, the crashing of waves, the crack of thunder, the whistling of wind, the call of geese, and a newborn’s cry as echoes of our own voice; the sound of life in motion. 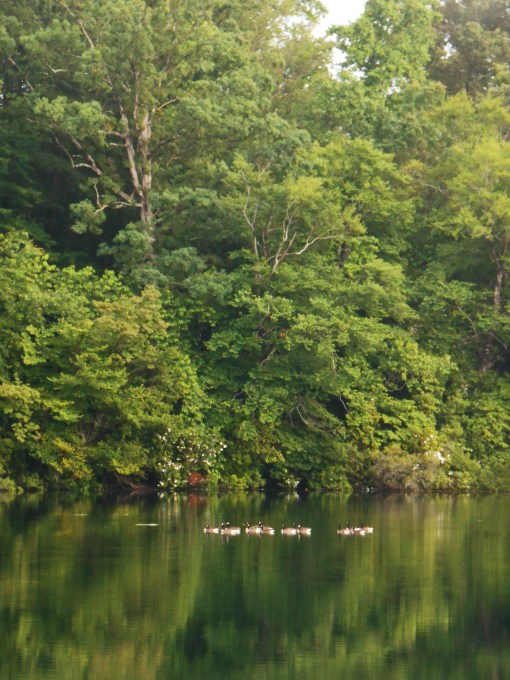 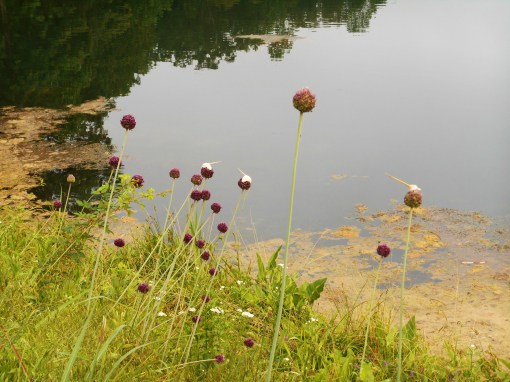 Blogging friend, Y., invited me to join the Seven Day Nature Challenge last Saturday from her new site, In the Zone.  I appreciate the invitation, as it has challenged me to find something to post each day over the last week.  I have enjoyed sharing some of the beauty of a Virginia May with everyone who visits Forest Garden.  And I’ve definitely enjoyed the daily exchange in comments with Y., and everyone else who has left a comment this week.

For this seventh day and last day of the challenge, I’ll invite you again to join in. This challenge has been out there for a while, and many nature photographers have already participated.  If you would like to take up the challenge, please accept in the comments and I’ll link back to you in a follow up post. 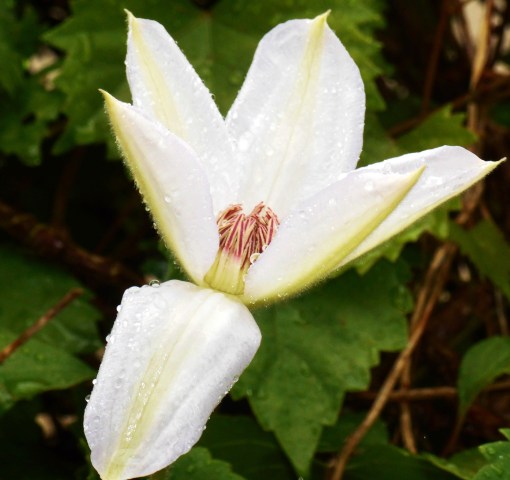