“What are they?” you might ask.  “Are they woody flowers?” “Are they sea shells?”

My partner found these while repairing the deer fences, and suggested I go find them with the camera. 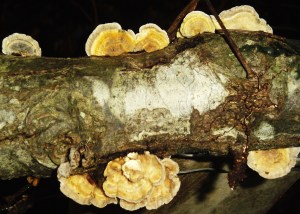 At the bottom of the hill, in the edge of the ravine, where the garden is always in shadow; their whiteness glowed in the twilight,  a beacon to lead me in.

A vast pile of branches lives just beyond the fence, supporting it.  They are the broken remnants of our orchard, destroyed by a neighbor’s trees falling across our garden during Hurricane Irene.  The crew  cleaned up our yard by piling them all, trunk and branch, into the ravine.

And there they sit, decaying now, barring access to hungry deer; and, sprouting, flowers?

These beautiful fungi growing from the wood are called “shelf fungi” or “bracket fungi”. 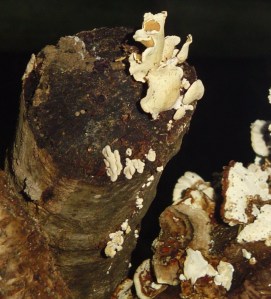 There are hundreds of species.  They are related to mushrooms, but different in some important ways.  Stemless, their spores are released from pores rather than from gills on the underside of a cap, like on many mushrooms.  They are also much harder than a mushroom.  In fact, these half-moon shaped “shelves” are often quite hard and woody.  Shelf fungi may also be perennial, forming “growth rings” during the seasons of active growth each spring and fall.  You may be able to count the growth rings, just as you would in the trunk of a tree to tell how old a particular growth might be.

Like most fungi, their purpose is to help decompose old growth.  They will help these branches rot and become rich compost.   Hyphae from the fungus release various enzymes, chemically decomposing the tree’s cells.  Once the fungi enter the wood, they usually spread, affecting more and more of the tree.   During the process, they create a beautiful habitat for spiders, mites, and insects.  Many will find homes in their pores; especially beetles.  Found on already dead branches, these shelf fungi are beautiful.  If found on a living tree they would signal that the tree is under stress.  Eventually, they would most likely kill it.  An arborist could remove them and try to correct whatever problem the tree was experiencing to prolong its life, but without intervention the tree would soon die.

This peach trunk still stands where it once grew. The tree is dead, but life still colonizes the bark. Do you see the “Granddaddy Long Legs”?

Fungi need moisture to grow, but are not photosynthetic, and so grow just fine in deep shade. Neither plant nor animal, fungi inhabit their own kingdom.   Shelf fungi can survive dry spells without suffering any harm, and will simply begin to grow again when the rains come.

Do you plant them?  We didn’t.  Although one can order spore for edible mushrooms to grow on fallen logs, I’ve never seen spore for shelf fungus offered for sale.  These just naturally colonized the dead wood in our ravine.  They are a gift of nature; airborne spores which settled on dead moist wood where they can grow.

The individual “shelves” are extremely hard.  Most are difficult to break off of their host branch.  They are hard to cut, and too tough to eat.  Artists have used them as canvas for their artwork.  When you etch a design on them, the design turns dark.  Very intricate designs can be etched into the surface of a large shelf fungus.  One can also paint on them as one would paint onto any wood.

They have been used in making jewelry.  They can be carved and whittled to form beads, or can be used as collected as a pendant or brooch.  Ground into powder, some varieties have been used as an herbal Chinese medicine and for tea.

And, if you find yourself in the woods needing light, shelf fungi can serve as a wick in an oil candle.  Pour oil into a container, and stand a shelf fungus on end, supported by some stones.  The fungus will turn dark when it has absorbed the oil and can be lit for a long lasting flame.

Not only beautiful, these living organisms are also quite useful, and serve an important role in a forest garden.

Mushrooms. These are different from shelf fungi because they are soft, have stems, and release their spores from gills, located under their caps. These are growing nearby at the base of a Hellebore.

All photos by Woodland Gnome