Greeness re-emerges each March from February’s shades of brown and grey.  We notice exquisite shades of fresh green wherever there is new growth; even if only weeds emerging in the lawn, new grass, and buds breaking open on early shrubs.

Green is alive with possibility, giving us fresh energy and enthusiasm.  Green is the color by which energy from the sun is captured and transformed into the sort of chemical food energy that fuels us all.  Whether we access it directly from a kiwi or avocado, or allow the green to be munched first by a cow before it is transformed into milk or meat; we depend on green chlorophyll to produce every calorie of energy which fuels our lives.

Green attracts like a powerful, life-affirming magnet, especially in the spring when we are ready to move on from winter’s rest.  And in these last chilly weeks of unpredictable weather, I enjoy making a green arrangement with ferns and mosses to enjoy indoors until spring is firmly established outside in the garden.

I have been experimenting with keeping moss inside for several years.  While all goes well for a while, the moss often ends up turning brown and sometimes disappearing entirely.  Moss is the simplest of plants, yet its nurture as a ‘houseplant’ proves fickle and complex.

Moss pairs well with ferns, as their needs are nearly the same. Lichens may also be incorporated in the design.  2014

For all of the vibrant green kokedama covered in moss I’ve seen in books and on other’s websites, I have not yet figured out how to reliably keep moss alive for long inside.  But I keep trying….. 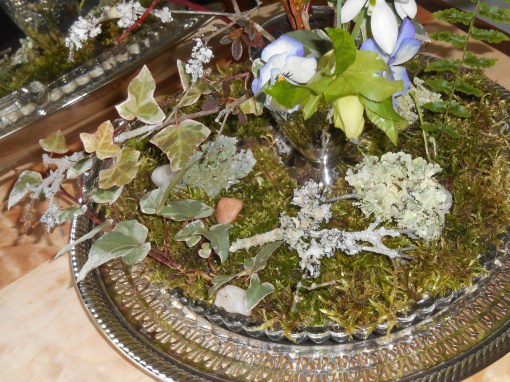 There is a bit of potting soil and sand beneath the moss to sustain the plants growing in the glass plate.  January 2015

Japanese guides suggest taking one’s potted moss outside for some portion of each day to give it fresh air and bright light.  This sounds suspiciously like walking a pet dog to me, and I’m not yet prepared to treat my moss gardens like a barking or purring pet.

I’ve also learned that closing moss up into a terrarium can be the ‘kiss of death’ because it gets too wet in the high humidity, and doesn’t get the free exchange of carbon dioxide and oxygen that it requires. 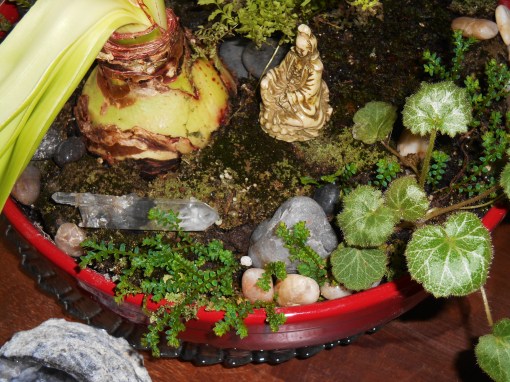 Let’s recall that moss has no vascular system.  There are no water carrying tubes through ‘leaves’ or ‘stems’.  Moss is so simple, structurally, that every cell absorbs water.  That means that too much water for too long will kill the cell, because it isn’t going to move the excess water on, elsewhere.

We must find balance in tending moss: the balance between light and shade, moisture and dryness, heat and cold. 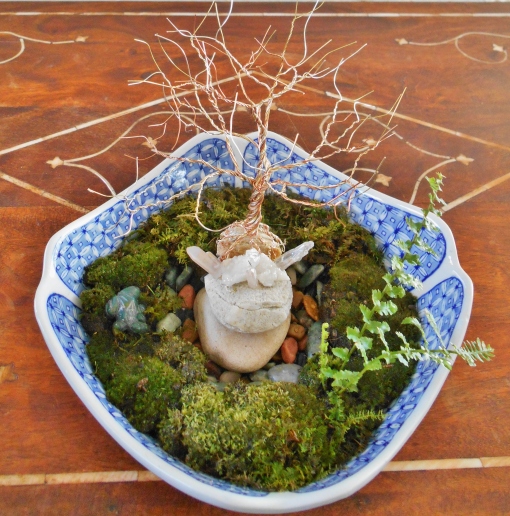 That is why I have chosen a tall, clear vase for this arrangement, but one without a lid.  I’ve constructed this like a terrarium, but have not enclosed it.

And for the time it stays indoors I will do my best to faithfully mist it several times a week, but will resist the temptation to pour water into it.  And, if I notice the moss struggling, I’m prepared to remove it, ‘plant’ it back outside, and start again with some fresh moss. 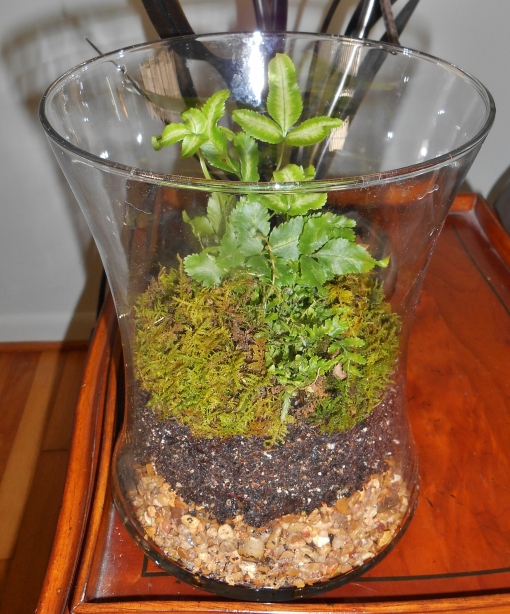 This is my favorite sort of moss, Thuidium delicatulum, which is called fern moss because it looks like fine, low growing fern fronds.  This perennial moss prefers a moist, acid soil, can stand a fair amount of light, and grows prolifically in several spots in our garden.

This is fern moss, Thuidium delicatulum, which looks like it is made of tiny, low growing ferns.

I’ve created a base in this vase with fine aquarium gravel mixed with some fine charcoal, recycled from a water filter.  I mixed a little more of the charcoal in with the coarse potting soil mix I used for the ferns.  This is soil I’ve used earlier this winter for starting tubers and bare root plants in the basement, and it was already perfectly moist when I scooped some into the pot.  Charcoal is often used in terrariums to help purify the soil and water, keeping the plants healthier.  Without any drainage, it helps prevent water in the soil from growing stagnant.

Moss doesn’t have roots, but needs firm, continuous contact with the soil.  After planting the two tiny ferns, I simply pressed sheets of moss, with its own soil from outside still attached, on top of the potting mix. 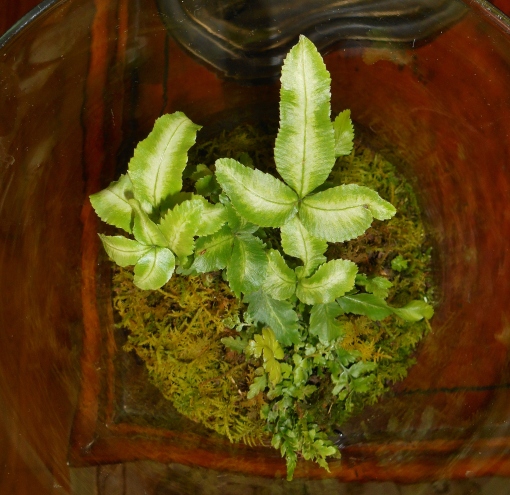 The taller fern is a popular houseplant called a brake fern or ribbon fern, genus Pteris.  This one is tender, though it will grow very well outside from late April through November.  The shorter one is also a tender fern, probably one of the footed ferns.

Then I misted it well, using the mister to also clean the inside of the glass.  The pot sits a few feet away from large windows and under a lamp.  It is a bright location, and I’ll hope that both ferns and mosses grow here happily.

Plants indoors are good for us in many ways.  Plants filter the air and fill it with fresh oxygen.  Plants calm us, and bring tremendous beauty into our homes.  Plants inside in early spring also inspire us and keep that promise of spring alive, even when the weather turns cold and wintery once again.

March is a fickle month, but the overall trajectory is towards more daylight and milder weather.  As the sun returns, our garden responds with fresh growth.

But we respond, as well.  And bringing a bit of that spring time magic indoors helps us celebrate the change of seasons… in comfort.