Lantana, ‘Sunny Side Up’

I was given a pot of Lantana, ‘Sunny Side Up’ last week to trial in our garden by friend and horticulturalist Joel Patton, who owns our local Homestead Garden Center.  Joel knows that I love trying new plants.  Joel also knows that I especially love Lantana for its butterfly magnet blooms. We have steered several friends his way to find Lantana plants for their own gardens.

Joel told me this plant is a new introduction in the series of hardy, perennial Lantana developed by plantsman Mike Dirr of Plant Introductions, Inc.  Mike found the Lantana cultivar now known as ‘Chapel Hill Yellow’ growing in his daughter’s garden in Chapel Hill, NC in 2005, and took notice when it returned, covered in golden yellow blooms in 2006.  After finding L. ‘Chapel Hill Yellow,’ he has been working with hybrid crosses using the cold hardy L. ‘Miss Huff,’ maternal parent of ‘Chapel Hill Yellow’, to develop even more cold hardy Lantana hybrids.  It is a good story, especially for those of us interested in how new plants come to the trade.

Mike’s story is a good story, too.  You can read about his work to develop better ornamental plants at an abandoned hog farm, now converted to a nursery, in Watkinsville, Georgia.  His company  now offers seven new Lantana cultivars, all of which prove drought tolerant, cold hardy, and offer a superior number of blooms with attractive foliage. 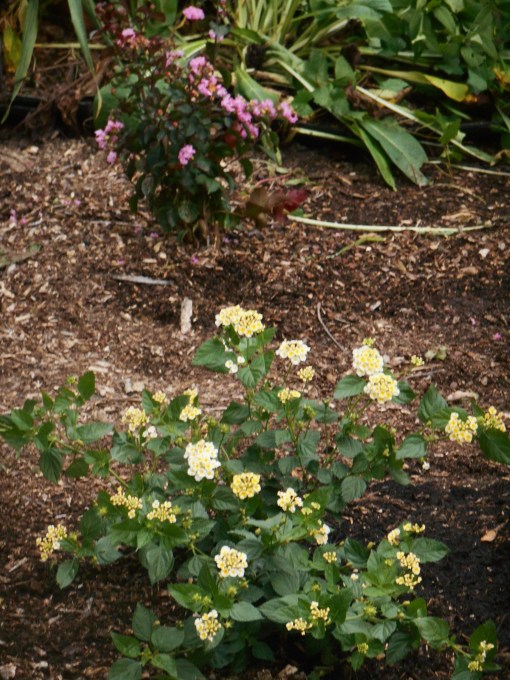 Newly planted Lantana, ‘Sunny Side Up’ near our new Crepe Myrtle, ‘Delta Jazz.’ It has been a busy weekend in the garden.

I am excited to grow out this gift of L. ‘Sunny Side Up’ to see how it performs in our garden.  This is considered a ground cover Lantana, growing to only  about 18″ but forming a wide, 3′ clump each year.  After debating for a day whether to plant it in a large pot or in the ground, I opted to plant it in a new bed I constructed yesterday for some Iris starts.  As pretty as I know it would look in a pot, I wanted to give the Lantana the best possible chance to establish and survive our coming winter.

We began this area in the spring with the addition of a new Magnolia shrub, surrounded with perennials. I’ve just extended the bed another 15′ or so to accept some new Iris, perennials picked up at the Heath’s nursery in Gloucester two weeks ago, and now the beautiful Lantana. The shrub in the middle is an Afghan fig transplanted a month ago for failure to thrive in its original spot. It likes the soil here better, and  now is growing well.

We have had such great performance from most of the Lantana plants we’ve planted in this garden.  Although they don’t all return, those planted in the warmer, sunnier front garden have come back faithfully now over several growing seasons.

Deciduous, the leaves and flowers soon shrivel and drop after a hard frost.  We leave the woody plants in place over winter, waiting until early spring to prune back the old wood to less than a foot.  It may be that we could just leave last year’s structure to leaf out anew.  I may experiment with that this coming season.  The woody skeleton provides shelter for the birds all winter long as they play among the branches and search for those few remaining seeds.

The plants leaf out a little late; it is sometimes late April or early May before you can see the life still in the branches beginning to push out new leaves.  We have flowers by June and the plants grow prolifically on through frost.

I stood by a single Lantana shrub earlier today which has already topped 6′ with another month or so left to grow.  It was covered in butterflies, with more coming and flying off continually as I took photos.  I don’t remember this one’s cultivar name, but I know it has returned faithfully each year since at least 2011. 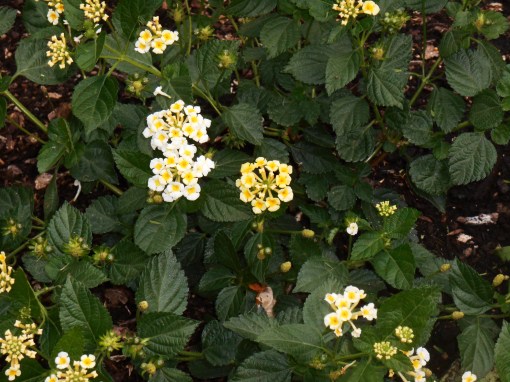 L. ‘Sunny Side Up’ has very deeply green leaves to set off it cream and yellow flowers.

L. ‘Chapel Hill Yellow’ and L. ‘Sunny Side Up’ are only rated to Zone 7.  If you want to grow these beautiful plants as perennials further north give them a favorable micro-climate.  Plant them on the southern side of a wall or near slates, stones, or concrete paths; which will trap and reflect heat during the winter.

We appreciate that our Lantana have never been grazed by deer or affected by any insect pests or fungal disease.  In fact, we’ve planted a line of L. ‘Miss Huff’ at the front edge of our garden along the street.  They have survived several winters now, and are shoulder high this year.  We love watching the butterflies hovering around them as we come and go.

‘Miss Huff’ Lantana growing along the street at the front of our garden in mid-August. ‘Miss Huff’ was one of the parents of ‘Chapel Hill Yellow’ and passed on her cold hardiness to this new Lantana series.

This plant addresses several needs of gardeners in our area, while also attracting butterflies and hummingbirds, and feeding birds from late summer through early spring with its abundant seeds.  It prefers full sun, though it will grow and flower with some partial shade. 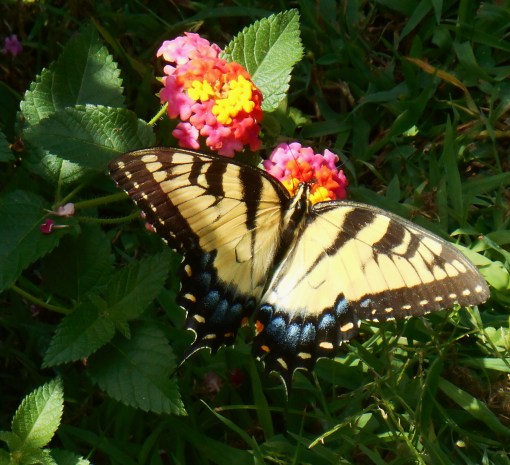 So please keep an eye out for Lantana as you shop your local garden center.

This is a very good plant to pot up now as you revive your planters for fall.  The rich reds, oranges, yellows and golds of its flowers combine well with fall color schemes.  It will flower non-stop until a hard frost, then continue to give your planter structure through the winter months. 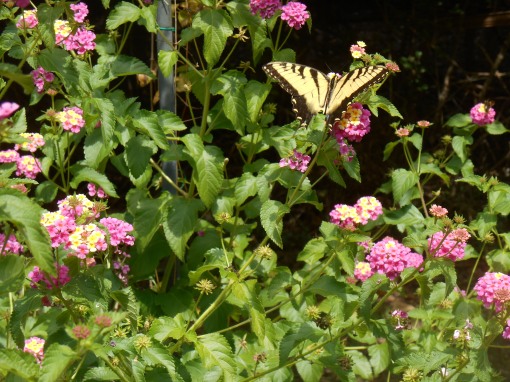 Our Lantana and rose bed last January after an ice storm.  Even after a long harsh winter, nearly all of the Lantana plants survived to bloom this summer.