Ordering Caladiums For Our Summer Garden

Again this year, I am organizing a large Caladium order for friends, neighbors  and family.  By combining our orders, we can buy large lots of 25-50 tubers of each variety which gives us a lower price per plant.  We also save on shipping costs.  I’ve selected a dozen different varieties to order this year.

Six varieties are new hybrids on offer from Classic Caladiums.  All of these were  developed by Dr. Robert Hartman, CEO of Classic Caladiums,  to withstand more direct sun and produce more leaves than older Caladium cultivars.  These six varieties have only been available commercially in the last few years.

I grew C. ‘Desert Sunset’ last summer, and was very happy with how it looked and how it performed.    One of the benefits of these new Caladiums is the introduction of some new patterns and even new colors into the world of Caladiums.

I am most interested in growing out  the new C. ‘Peppermint’ this year. 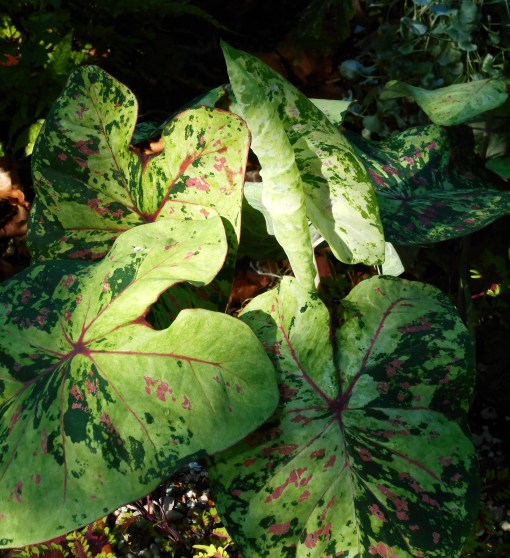 You might have seen my posts last summer about C. ‘Sweet Carolina.’  I’ve saved the tubers I grew last summer and hope they survived winter in our garage.  That cultivar isn’t on the list, although the Caladium proved to be a strong grower.

Our friends who grew the tubers I shared with them weren’t very enthusiastic about it; likely because of its truly unusual appearance.

Caladium, ‘Cherry Tart’ is a fairly short variety, but produces lots of intense, red leaves.  These plants were vigorous and vibrant until frost.

They were much happier with C. ‘Cherry Tart.’  A gorgeous deep red Caladium, I would recommend it to anyone.  You won’t find it on this list because I want to see the new 2017 red Caladiums C. ‘Fireworks’ and C. ‘Flare.’

Here are the varieties I plan to order for 2017: 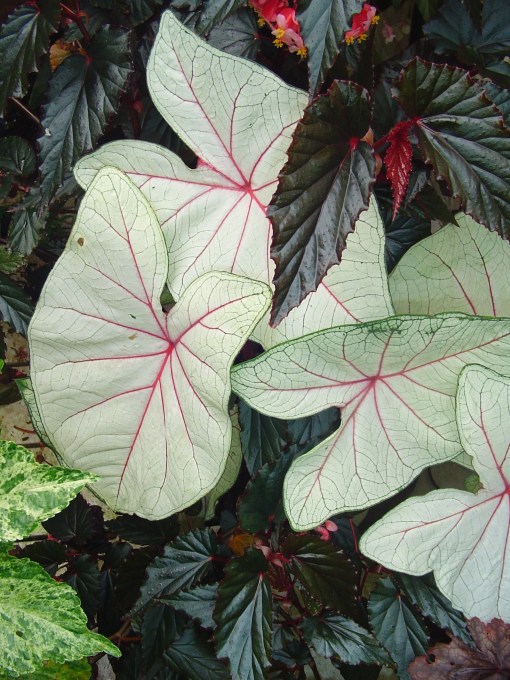 All six of these older varieties are beautiful, strong growers.  It is very hard for me to choose a favorite.  Thankfully, we enjoy them all in different parts of our garden.

All four varieties with ‘Florida’ in the name were developed at the University of Florida. They are fairly new hybrids with pretty good sun tolerance, vigor, and good health.  C. ‘Miss Muffett’ is a gorgeous Caladium, and one of the parents of the improved C. ‘Sweet Carolina.’ 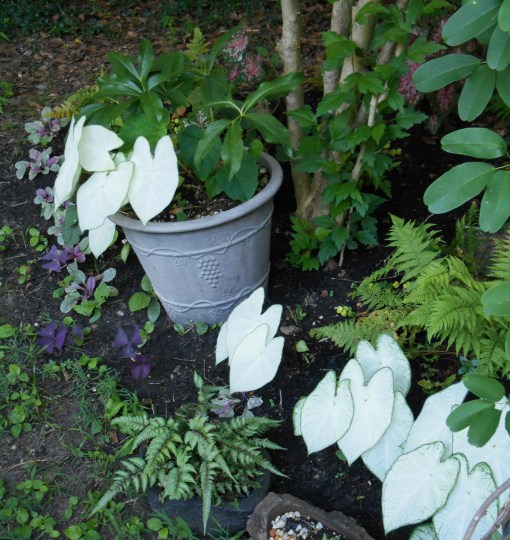 Although I shared an email invitation last week with a few friends and neighbors to join this year’s Caladium order, I am posting the list of Caladiums, and a few photos,  again here.  Some folks had trouble opening the page I sent with photos of all six varieties.

If you live in the Williamsburg area, and would like to participate this year, then please contact me sometime this week by email.  We will get in touch with one another and you can join our order anytime between now and next weekend. 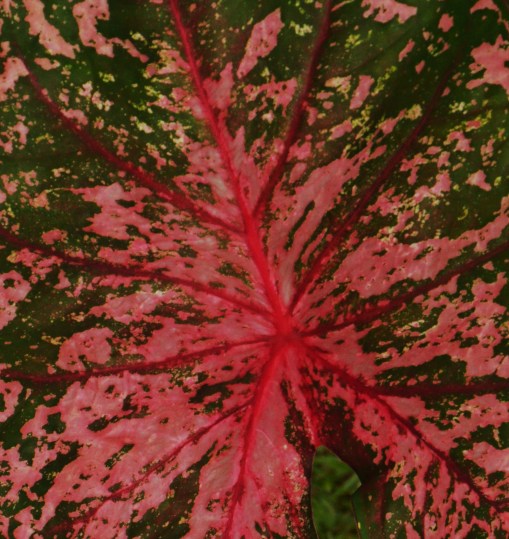 Caladiums prove a great plant for our hot Virginia summers.  They thrive in our heat and humidity!  Once they get going in May or early June, they keep giving and just grow better with each passing month until the weather cools in October.  Whether grown in a pot or in a bed, Caladiums have few problems and generally are left alone by deer and other wildlife.

These are a good choice for busy gardeners who don’t have time to fuss around with high maintenance plants.  Foliage plants have staying power in the garden.  These are some of the easiest and most interesting foliage plants we’ve found.

And now is the time to plan for the coming season.  Order yours now, while the selection is still good. 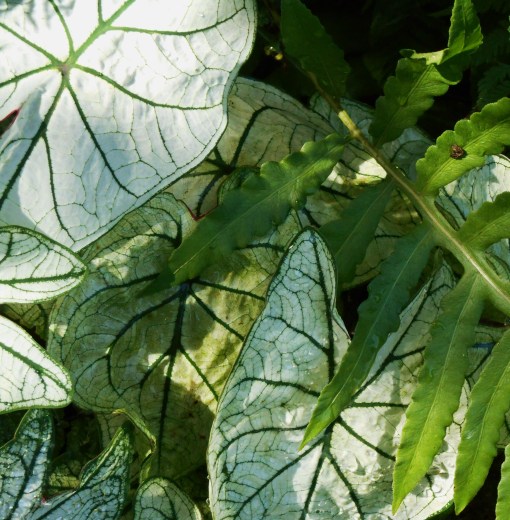 “Those who contemplate the beauty of the earth

that will endure as long as life lasts.” 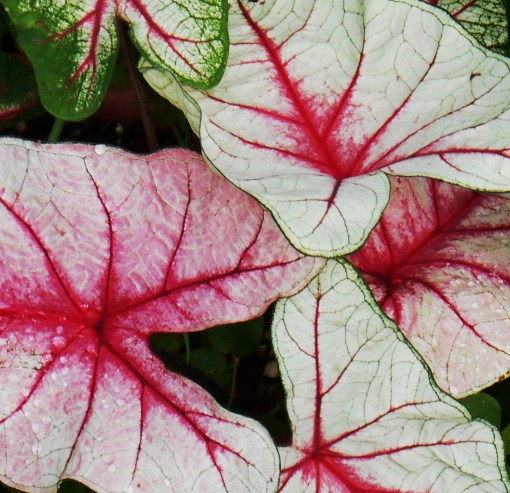 and unallied with definite form,

can speak to the soul in a thousand different ways. ”

“Live in each season as it passes;

breathe the air, drink the drink, taste the fruit,

and resign yourself to the influence of the earth.”

“Why do two colors, put one next to the other, sing?

Can one really explain this? no.

Just as one can never learn how to paint.”

“The scientist does not study nature

because it is useful to do so.

He studies it because he takes pleasure in it,

and he takes pleasure in it because it is beautiful.

If nature were not beautiful

it would not be worth knowing,

and life would not be worth living. 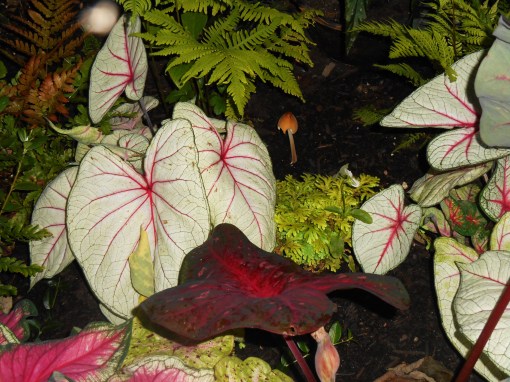 “Nature does nothing uselessly.”

“Let me, O let me bathe my soul in colours;

let me swallow the sunset and drink the rainbow.”

“Adopt the pace of nature: her secret is patience.”

“My garden is my most beautiful masterpiece”

I love the bright, bold Caladium leaves of summer.  These huge tropical beauties, often called ‘elephant ears’ for both their size and their shape, remind me of living Valentines.   Their form, their red and pink coloring, and their wild patterns remind me of February’s little expressions of love, grown huge summer’s muggy heat. 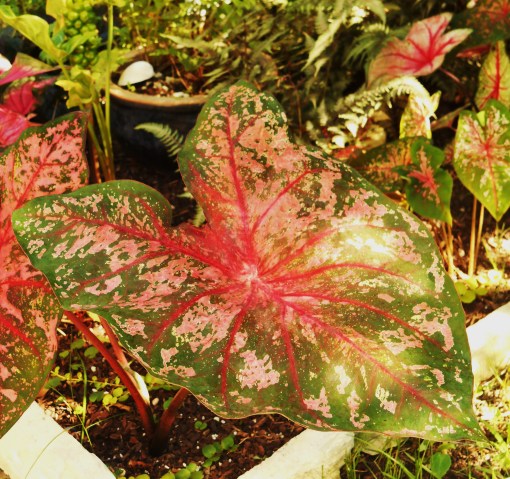 C. ‘Gypsy Rose’ was among the first Caladiums we planted out in May.

Ours got a late start this year.  It was too cold to put them outside until well into May.  Caladiums love heat!

Plant them out too early and they will sulk along, and maybe even rot before rooting and sending up their beautiful leaves.  Growers counsel us to wait until it is 65F outside at night, consistently, before planting them in the ground.

That is why I start them indoors, in potting soil, and have them ready to go outside when the weather has warmed enough to grow them. 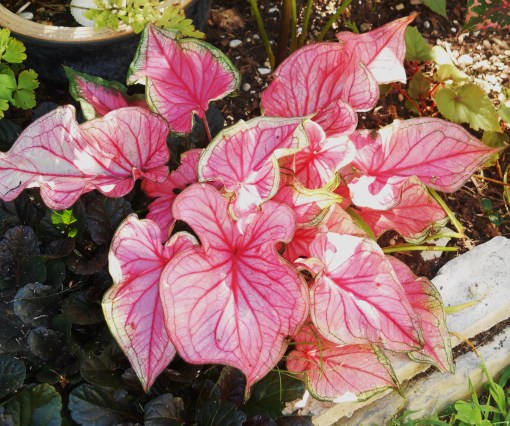 These ‘Florida’ series Caladiums, developed at the University of Florida, can take more sun than many other varieties will tolerate.

I planted out the last of our sprouted tubers just last week, believe it or not!  These last were some of the tiniest tubers which came with our order, and they were planted in a plastic box, waiting in the garage for me to decide where they were to go.  (Sometimes small pieces break off of larger tubers during shipping.  Though they are small, they will still root and grow!) 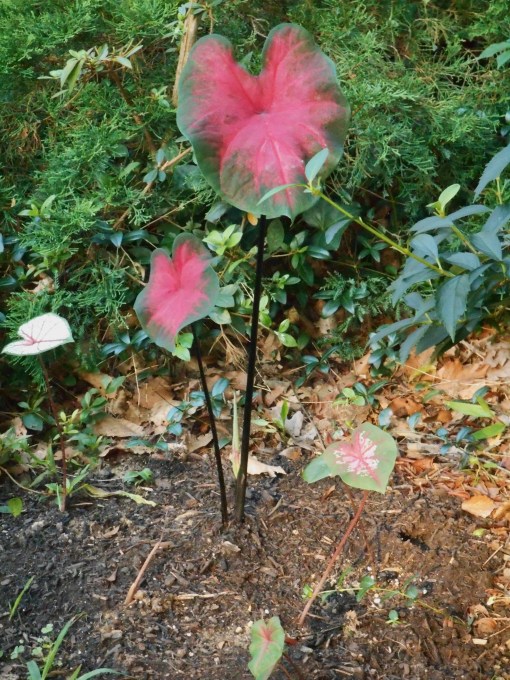 These are the last stragglers of this season, planted out about a week ago. Their tubers are only the size of grapes, but I expect them to fill out in the coming weeks.  The largest is C. ‘Florida Red Ruffle.’

These were the last to finally grow leaves.  I planted them in the shade of some shrubs, where we’ve not had Caladiums in years past.  They are near the top of our drive, planted in a shallow layer of compost, where we can see and enjoy them every time we come and go.  With this new bed started, I’ll begin adding companions after the Caladiums establish, to fill it out.

The Caladiums I ordered last February, from a grower in Florida, arrived huge and healthy.  I was amazed to unpack them and discover a few  Caladium tubers the size of baking potatoes! 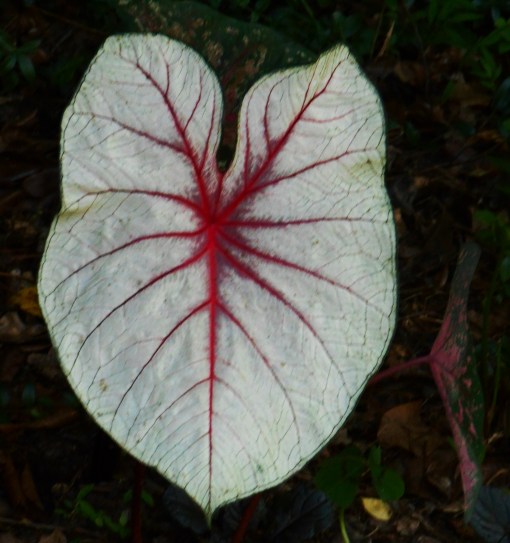 C. ‘Florida Fantasy’ remains one of my all-time favorite Caladiums. They are surprisingly sun tolerant to have such a delicate, white leaf. This one grows in full shade.

But some from a ‘starter pack’ we also ordered from the grower, weren’t that large at all; maybe the size of a large grape.  Not to worry.  The tuber size doesn’t affect the leaf size or height.  This is a genetic thing.  The tuber size determines how many leaves will grow from the one plant.  And of course, the tuber expands over the course of the season.

I also picked up a pack of C. ‘Florida Moonlight’ tubers at the ‘end of season’ sale from a local nursery. 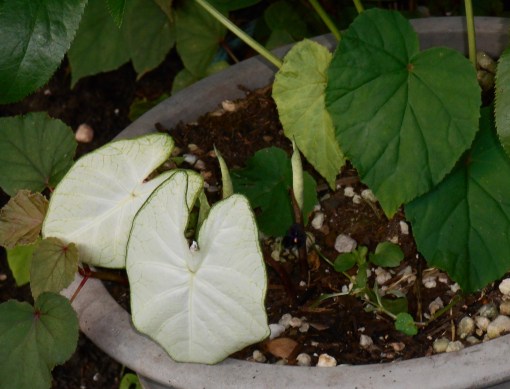 These were about the size of a half dollar, and it was warm enough to plant them directly outside.  After nearly a month in the ground, they are just beginning to send up leaves now.  I have high hopes that they will fill out and look stunning by August.

The earliest tubers to go out, in May, all survived, despite our cool nights lasting well into early summer. After a slow start,  they are responding to our heat and making lots of new leaves.  Watching each huge new leaf unroll brings its own pleasure!  Our hot, humid summers offer the tropical climate these lovely beauties crave. 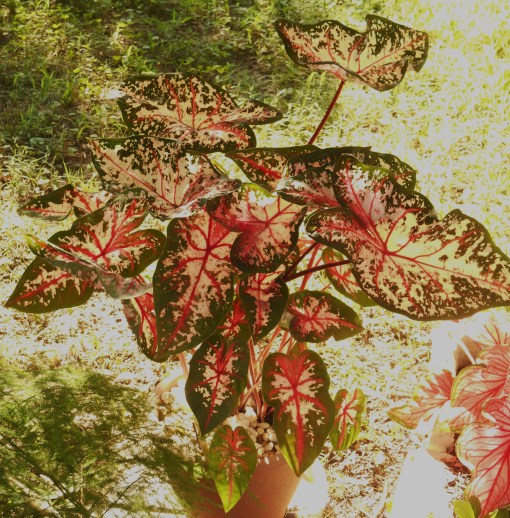 This Caladium  is a single plant from one of those ‘baked potato’ sized tubers. The photo was taken after 6 this evening, and you can see how bright the sun remained even late in the day.

Grown in dappled shade, Caladiums never scorch or wilt.  Deer and rabbits rarely touch them, as their leaves are mildly poisonous to eat.  Their color is as bright as any flower, and far more long lasting and reliable.  They beautifully fill a pot or bed.

They are neat and require very little care, beyond keeping them watered when there is a break in the summer rain.  Caladiums are raised on sandy soils in Florida, but they appreciate compost in their soil, and a little feeding to keep them going strong.

Here is the same plant, photographed a few hours later.  I love these wildly patterned leaves of C. ‘Lance Wharton’!

New Caladium varieties are introduced each year.  Some of the newer ones are the “Florida” series, bred at the University of Florida after 1988, to give better leaf production, larger tubers and to tolerate more direct sun.  Look for those Caladiums with ‘Florida’ in their name, such as C. Florida Red Ruffles and C. Florida Fantasy if you want an improved, relatively sun tolerant Caladium plant.

Dr. Robert Hartman, CEO of Classic Caladiums in Zolfo Springs and Avon Park, FL; is introducing several exciting new, improved Caladium varieties each year.  Most of these new varieties can tolerate full sun with proper hydration.  I am looking forward to growing a few of these varieties in the coming months, and will post photos as they grow.  One in particular, a 2016 introduction called C. ‘Desert Sunset’ has piqued my interest for its beautiful salmon and copper coloring and ruffled form. 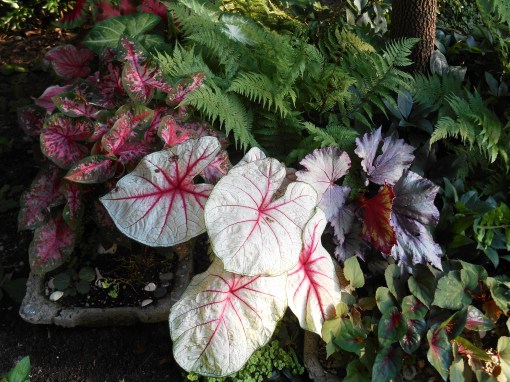 I like to mix Caladiums with ferns and Begonias.  I tend to use them as an accent plant in a pot or bed.  Others may prefer to grow a solid bed of Caladiums for a massed effect.  Use low ferns, Ajuga, Oxalis, Vinca, or other low ground cover plants to fill in the bed.  You can select Caladium varieties by size, with heights between just a few inches and several feet.  As with most plants, they tend to grow taller in the shade, and more compact in the sun.

Two other plants, often confused with Caladiums, are also called ‘elephant ears.’  Also tropical, Colocasia and Alocasia have similar leaf shapes, but different coloration and texture. All three of these bloom, but those blooms are insignificant.  Many gardeners simply cut them away.  ‘Elephant ears’ are all grown for their beautiful leaves.

Alocosia have a thicker, waxier leaf than Caladium. Often, their leaf tips point up towards the sky.

All ‘elephant ears’ love warmth, and nearly all must be brought inside before frost.  They may be dug up and the tubers stored, or they may be kept in pots indoors through the winter.  But only a few cultivars of Colocasia are hardy in our Zone 7. 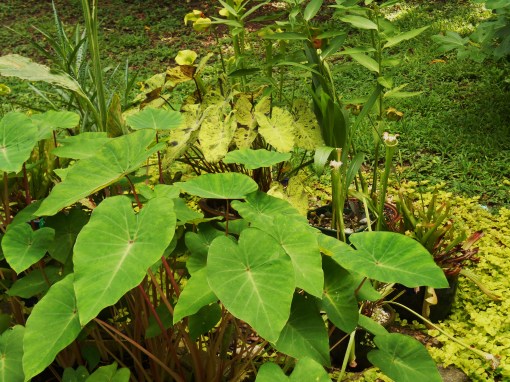 Colocasia generally have the largest of the ‘elephant ear’ leaves. This is C. ‘Pink China,’ and has proven hardy in our Zone 7 garden.  C. ‘Mojito,’ behind, is supposed to be hardy here, but overwintered in our basement.  These prolific plants spread each season and may be easily transplanted.

These gorgeous tropical plants, with their heart shaped leaves, are one of my true loves of summer.

Big, bold, surprisingly beautiful; elephant ears fill the garden with mass, texture, and movement as they swish and sway in the breeze.  Carefree and attractive, rely on them to look great during the heat of summer. 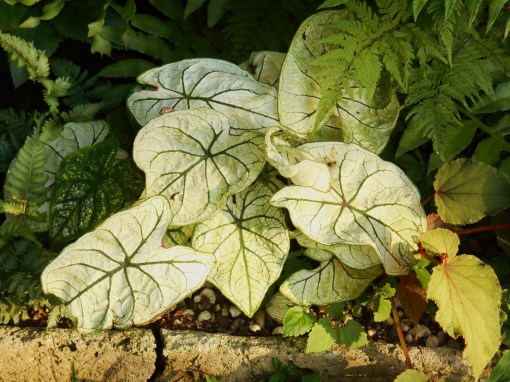