Is it too early to hope we’ve seen the last of frozen marshes and piles of freshly shoveled snow?  The optimist in my heart wants this breath of spring to last; the daffodils to open, fruit trees to bloom, and weather to settle into comfortably warm days and nights.  Long experience living in this region tells me it is too early to relax winter’s vigilance.  We’ve had snow here into April, and Easter often dawns wet and cold.

But Saturday eventually warmed up a little by late afternoon.  It was a sunny day, if windy; and I was convinced, after several promptings, to join my partner in a drive to see what we could see. 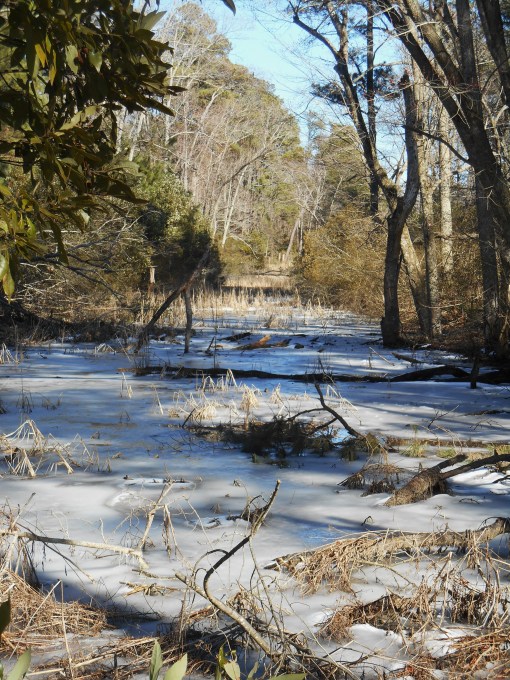 We headed towards Jamestown on the Parkway.  There seemed nothing new to see.  No nesting eagles; no budding trees.  Only puddles, snow piles, bare trees, and icy marshes presented themselves to my winter jaded eyes.  I was having difficulty finding the beauty of the day.

But we persevered, and had gotten onto Jamestown Island when a pair of geese, standing near the shore, inspired me to leave the warmth of our car. 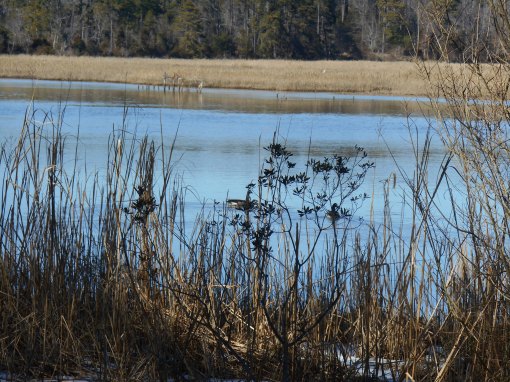 As I scampered down the bank, avoiding mud and ice as much as I was able, they began paddling out into the creek.  There were no clear shots through the underbrush and trees.  And there was no dry path to the water’s edge.

But as I was almost giving up, I spotted a Great Blue Heron wading in the shallows on the other side.

After one photo he saw me, too; and I got off on more shot as he took wing. 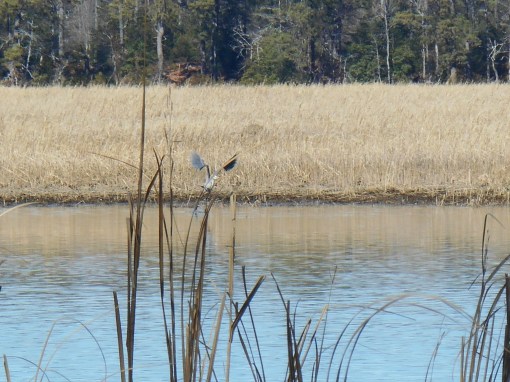 At least we had found where the birds were sheltering.  And we found bright swollen buds on a few trees here and there, even as their roots disappeared under a stubborn layer of briny ice. 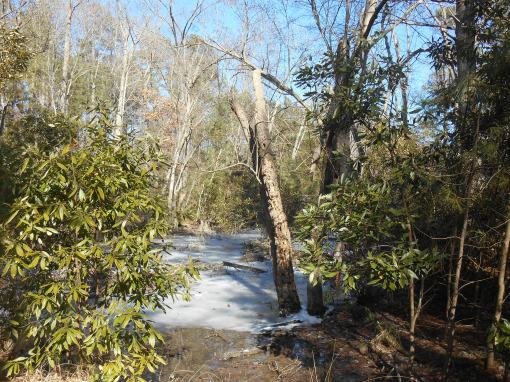 It hasn’t dropped below freezing here for nearly three days now.  Songbirds fill our garden, and we hear the hoots of owls and honks of geese and urgent calls of hawks circling overhead. 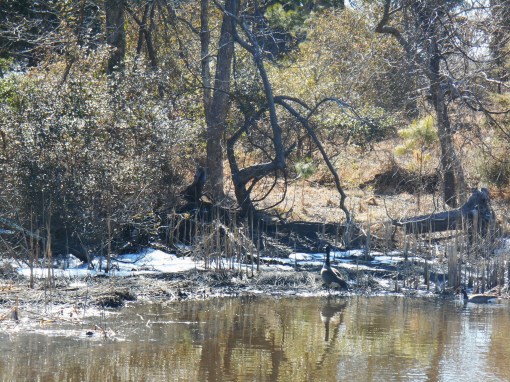 More daffodils break through the soil each day to start their climb towards the sun.

Have you noticed that seasons never change with any real clarity?  Even though we turn the page on our calendar, and the Weather Channel actors declare “Meteorological Spring,” (a term I never heard until a few weeks ago); the actual melting of one season into the other remain a bit fuzzy.

There is always the in-between time of see-sawing back and forth from warm to cold to hot to chill before we settle back into the new routines.

Yet every small step towards spring brings joy.

The pond behind our house has nearly thawed.  The piles of snow beside our drive are nearly melted.  We saw a robin pluck a living, wiggling worm out of the front lawn this morning.  Sunshine pours in through the windows, and I found freshly grown sprouts and leaves on the catmint when I cut it back this morning.

We hope this melt is the last of the season, and that we can get on with the business of welcoming spring. 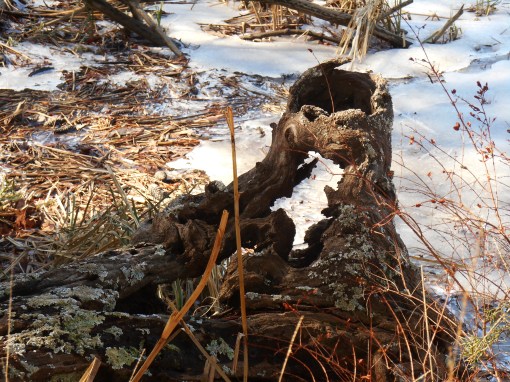 “Real” astronomical spring won’t arrive until March 20, late next week.  Friends in Oregon post that they are a full month ahead and enjoying unusually warm, strangely dry weather for March.

We are watching the sky, the birds, the trees and The Weather Channel, hoping we have already survived winter’s last blast for this year.  I’m still a little skeptical….

There is a spot along the Colonial Parkway, on the way back from Jamestown Island, where I’ve wanted to stop and take photos for several weeks now.

There is no designated parking area along this long stretch of open fields beside the James River, but there is a privately owned dairy farm on the opposite side of the road.

We always enjoy watching the herd of cows who pasture there.  The family also maintains a small herd of goats, who love to escape, and a few Llamas.

My interest in the field beside the river is, of course,  botanical. 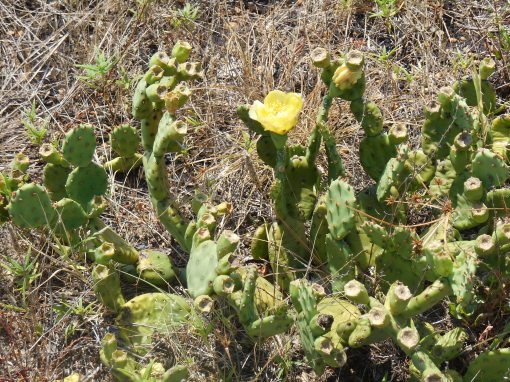 There is a large colony of Eastern Prickly Pear Cactus, Opuntia humifusa; native to hot, sunny, well drained areas along the East coast; growing in this field beside the river.

I mentioned to my partner how much I’d like to photograph these cactus in bloom.

With very light traffic so early in the morning, we pulled over  into a driveway by the dairy farm’s gate. 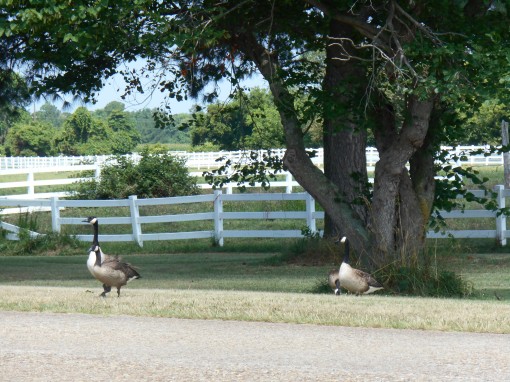 Now the pasture is home not only to the cows, but also to a huge flock of Canada Geese.

They enjoy the low areas of the pasture which fill with water and the abundant supply of food.

Yesterday morning the geese were feeding in the rich, wet grass beside the road.

When we stopped and I got out, and started walking back towards the field of cactus; the geese were not amused.

In fact, the leader gave the signal to the flock, and they all turned and began the long journey from pasture to river…. on webbed foot.

Every goose in the flock obeyed the command- in single file.

They reminded me of the Penguins who paraded around the London Zoo when I was a child.

The geese  were visibly unhappy at my approach.

But they were between me and the cactus we had stopped to photograph.

One or two stood up to full height and spoke honks of caution, warning me to keep a safe distance as they passed.

A lone car approached along the Parkway, and stopped to watch the spectacle.

Every goose in the flock eventually plodded along the long route from pasture  to beach. 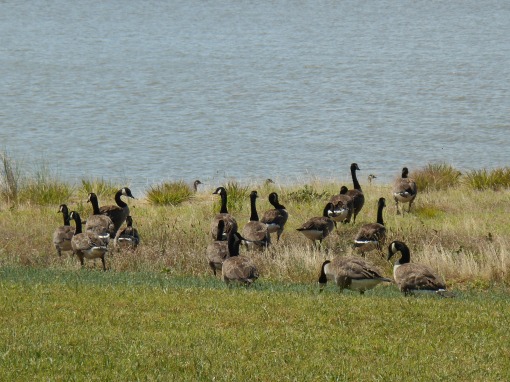 They milled about on the sand, watching out for one another, and finally launched into a flotilla paddling out into the current.

As the last of the geese marched across the field, I followed.

I went all the way to the beach, following their progress,  taking photos of this  not yet explored area along the river’s bank.

And yes, I managed a photo or two of the cactus along the way. 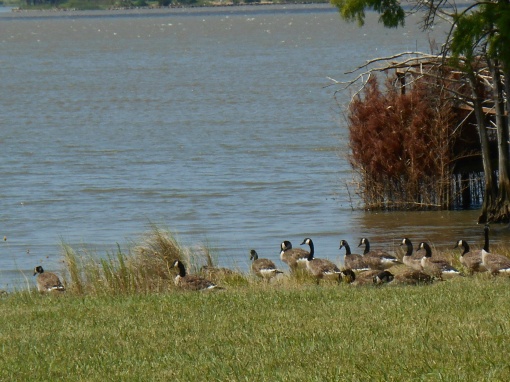 But mostly, I was intrigued by this “up close and personal” visit with the deliberate and dignified community of geese. 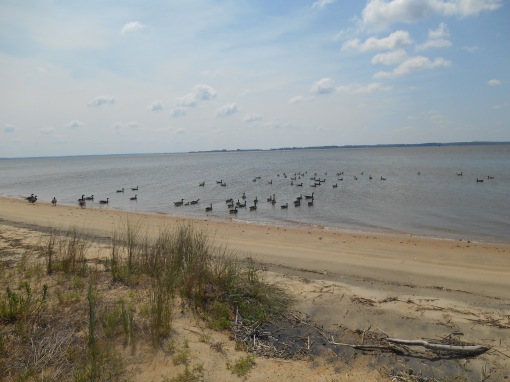 A beginning is something of a mystery, for every beginning is born from something already there.  Beginnings can be counted back in an endless web of connections and interconnections to… what?  If we trace back far enough, what do we find?  What is the spark, the point of transition, of energy into matter at the beginning?   Which came first, the darkness, or the light? 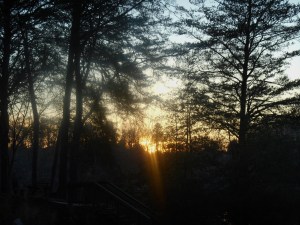 And what is the spark which energizes each new beginning, moment to moment, in our lives?

“New Year,”  “New Garden,” “New relationship;” at what point does the remains of the old transition into the Genesis of the new? 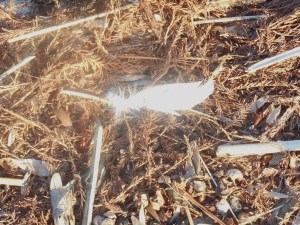 The points we choose, so often, are arbitrary; allowing us to compartmentalize our experience into neat piles.  We close one calendar and open another.  We open a packet and plant a seed.  We shake a hand and say, ” Hello.” 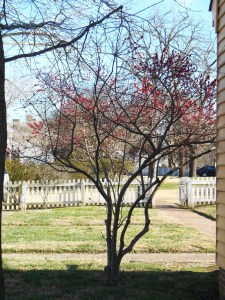 Taking a snapshot in time and labeling it, “The Beginning” asks us to disregard all that came before.  We are all deeply enmeshed in this recycled, recycling web of being.

We gardeners, whose hands are never far from the Earth, exploit the neatness of the system as we grow alongside our gardens.

We treasure the compost of our lives as the brilliant, energetic chaos which allows birth and sustenance of the new.

We watch seeds ripen from the faded flower; pull tiny bulbils from the base of  last year’s bulb; cut a branch, root it, and watch it grow into its own maturity. 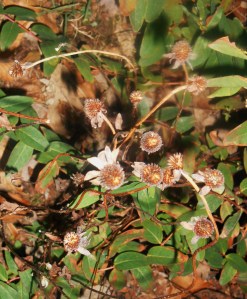 We look into our children’s faces and see our own grandparents. 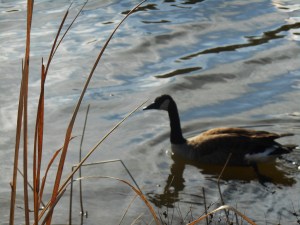 We see all life and living as ripples and waves;  light shining on an endless sea of possibility.

Back to the Bare Bones

Our landscape is back to the bare bones.

Again we can catch a glimpse at the structure of things,

the truth of them.

Leaves blown from branches, grasses falling back to Earth, 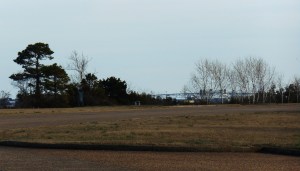 only partially obscuring our view of what is beyond.

The horizon has opened.

Woodland windows opened to see past the edges,

into the heart of things.

There is a hardness, an emptiness, a utilitarian look to the world in winter.

Sharpness in the air echoed by the sharpness of the light

Echoed again in the sharp chirps and trills and laughter

of birds calling to one another

With warning, with encouragement, with wisdom

With the sheer joy of a light washed winter day. 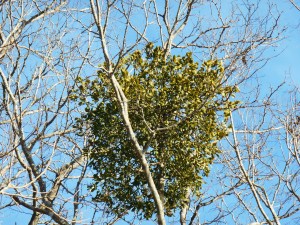 How often in life do we glance at the big picture, absorb the information we need, and move on?

I know I operate in that mode quite a bit.  It seems there is never enough time in a day for all I want to do, and so much of my life is lived “in a hurry.”  Especially this last week, preparing for our community party today, I’ve been cramming as much as possible into each passing day. 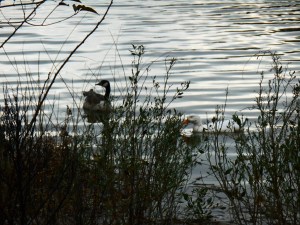 On the way home from taking photos on Duke of Gloucester St. on Thursday we stopped by a park.  I’d caught a glimpse of white out on the water- a duck- and so we turned around and drove back to take a photo of the duck.  We have seen swans here occasionally, but not recently.  Even the white ducks come and go.  It was worth a look.   One shot led to another:  the fog rising off the water, the Canadian Geese, the beautiful trees.

I was headed back to the car.  But my partner kept gesturing for me to look again.  I turned and scanned the far bank, not seeing anything in particular beyond the trees.  “There’s a heron.  Look again.”

I scanned the bank and couldn’t see it.  But I zoomed in with the camera, slowed down, and looked slowly and carefully until I spotted it. 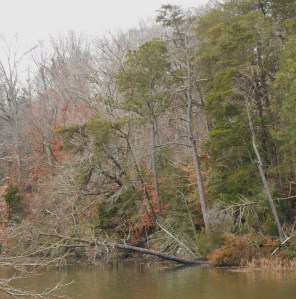 The beautiful heron was standing on a log over the water, secure in his safety as he blended in to the background forest.

I think we have to let our attention “zoom in” on a regular basis.  We have to meditate on the details, and look for those things we might otherwise overlook.

Especially in relationships; I think we owe it to our loved ones to zoom in to listen, to observe, to empathize.  To not just scan the big picture day after day.  What amazing things we see when we pause to really look.

All Photos by Woodland Gnome 2013