As June fades towards July, we appreciate every speck of shade our garden offers.  Summer days in Virginia routinely heat up to over 90F.  And it’s a moist heat, here near the coast.  Some days we have nearly 100% humidity.

When I was growing up in Virginia, we somehow survived it, often without any air conditioning.  The first few schools where I taught didn’t have air conditioning, either.  Maybe that is why I love the shade and know the value of a cool breeze on a summer day.

The lowest slope at the back of our garden enjoys a lot of shade.  It is steep, and erosion remains a concern.  This is one of the first areas where we began planting ferns in our first year of tending this garden.  A dense stand of bamboo grows just beyond, where our garden falls off into the ravine.

Ferns emerging on our sloped fern garden in early April

I add a few more ferns and shade-loving plants to this area each year.  I began a new planting bed around the stump of a newly fallen tree, at the base of the slope, several years ago.  It began with a transplanted Hellebore seedling and some  little autumn ferns, planted into a mound of compost poured in and around the stump.  Well, they  survived into the next year, and so I made the circle of compost a little wider and added a few more plants.

Autumn Brilliance ferns planted are  in Leaf Grow Soil conditioner packed around a small stump, for the beginnings of a new garden in the shade.   June 2013

I’ve added a few more plants each year, including some Sauromatum venosum, or  Voodoo Lily tubers, in 2015. 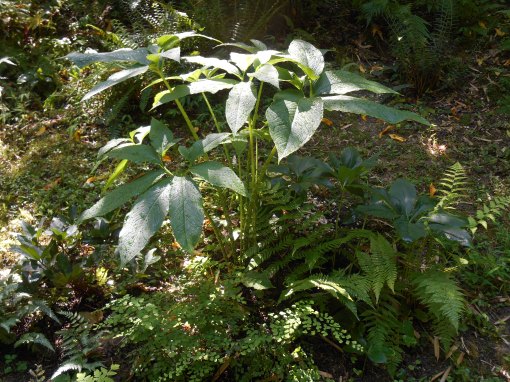 I thought I might have ruined this ‘Voodoo Lily’ tuber when my spade hit it early this spring. Rather, it is better. Instead of one or two stems, it has sent up many, producing a much better plant.  July 2016

We finally decided this spring to extend this whole area and give it a proper border.  This was very early on when I was studying rain gardens, and thinking about places on our property where we needed to do more to catch and use run-off from storms.

This shady slope has fairly good soil, but is ridden with roots.  So I simply outlined the new dimensions of the bed, laid an outline of landscaping bricks, and set to work eliminating the existing  weedy growth.

Some of the weeds, near existing perennials, needed pulling.  Some areas where moss was well established, I wanted to simply leave alone.  But much of the new garden could be covered with brown paper grocery bags, and topped off with a few inches of compost.  This is the best method I’ve found for creating new planting beds in this garden.

I chose a selection of ferns and shade loving perennials to harmonize with the ferns, Hellebores, and voodoo lily already growing here.  Although I’ve planted mostly hardy ferns, there are a few more tender ferns that I potted up last fall, and returned to this bed after danger of frost.  Others are planted into containers and  displayed in this area. 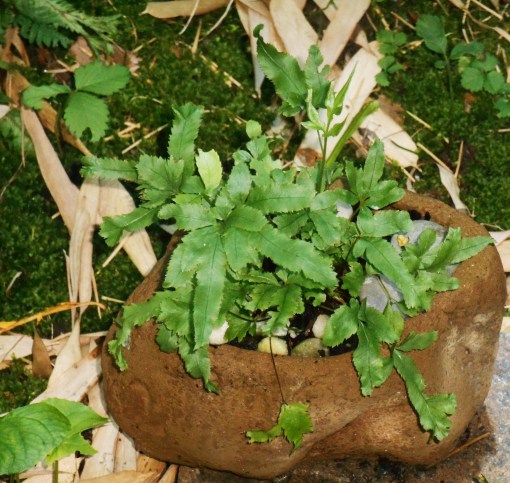 Bamboo leaves drift down on every breeze.  I clear them, occasionally, off of the larger plants in this bed.  One day, when I’ve nothing else to do, I plan to grab our leaf blower and blow all of the bamboo leaves away from the garden and back towards the ravine.  I’m sure the moss establishing here would be better for it, and so would my character.  How I admire fastidious gardeners!  Perhaps one day I’ll join their ranks…. 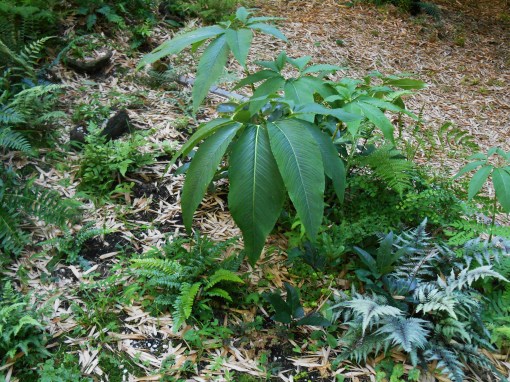 Ken Druse has written a delightful book entirely about gardening in shade.

His The New Shade Garden is one of those beautiful books I lusted after for more than a year, before I finally ordered it this past winter.  The luscious photos and useful information and encouragement on every page left me wondering why I waited so long to read it.  This book is a treasure, and I highly recommend it to you if you share my affinity for finding cool haven in the shade.  You’ll find whole chapters devoted to shade loving trees, shrubs, perennials and ferns; along with useful lists and recommendations for plants for particular situations. 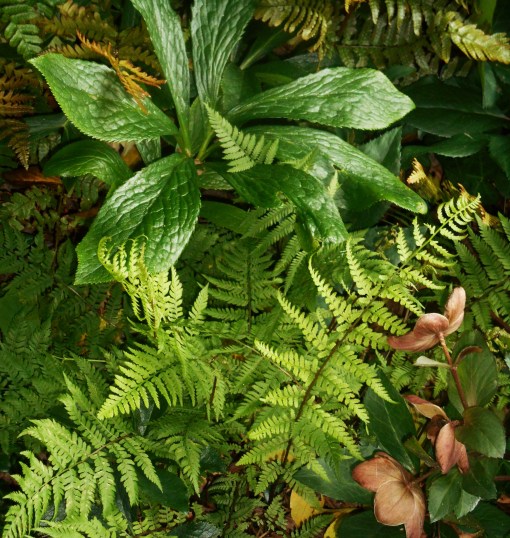 All we need now, to complete this beautiful shade haven in our back garden, is a little patio and a place to sit.  That may still be a few years off, though.  Somehow I’m always more interested in plants than hardscape, and rarely find time to just sit in the garden.

There is always more to do…. something waiting for me to plant…. 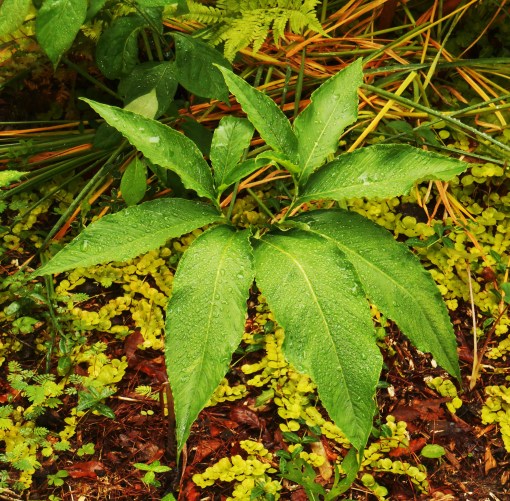 Call and response from the pond;

Birds perch beneath the eaves, 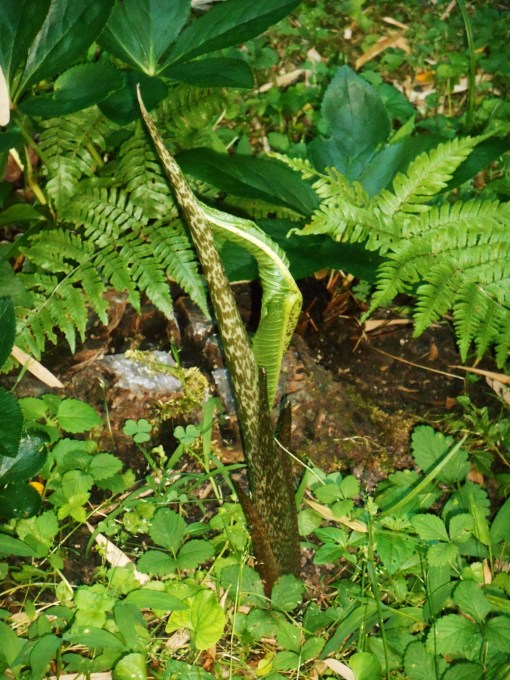 Voodoo Lily, Sauromatum venosum , emerging with it s first leaf of the season.

The Voodoo Lily bulbs we brought home from our visit to Brent and Becky Heath’s  Gloucester garden in early April have not disappointed us.  Their first leaves of the season are emerging in weird and wonderful form.

These African natives, Sauromatum venosum,  offer a flower first, followed in early summer by one or more large, tropical looking leaves.  The leaves will last in the garden until frost.  The first leaves are just emerging in our garden this week.  They are as odd looking, and as poisonous, as the huge flowers which preceded them.   These plants aren’t poisonous to the touch, by the way.  But they are poisonous if ingested, which protects them from grazing.  They won’t harm us,our cat, or nearby wildlife ….

Sauromatum venosum, just planted in April, with its huge flower.

Many of the bulbs had already produced flowers when we purchased them.  We planted them with their flowers lying on the ground, and only a few managed to perk up a little before withering away.  We expect next year’s blooms to be fabulous, as these tubers slowly spread, and the lilies propagate themselves from seeds, which ripen in the autumn. 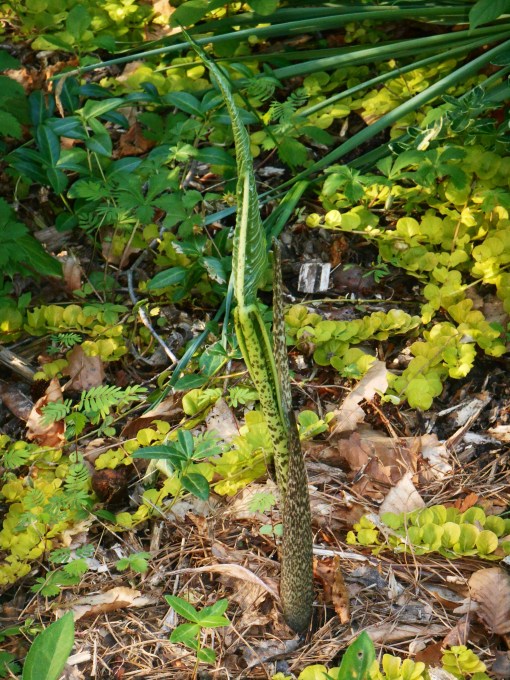 There are three Voodoo Lily plants spaced in a border near our driveway.  I’ve transplanted offsets of Colocasia, ‘China Pink,’ around them.  C. ‘China Pink’ grew vigorously for us last summer, and I expect this area to remain interesting as the season progresses. 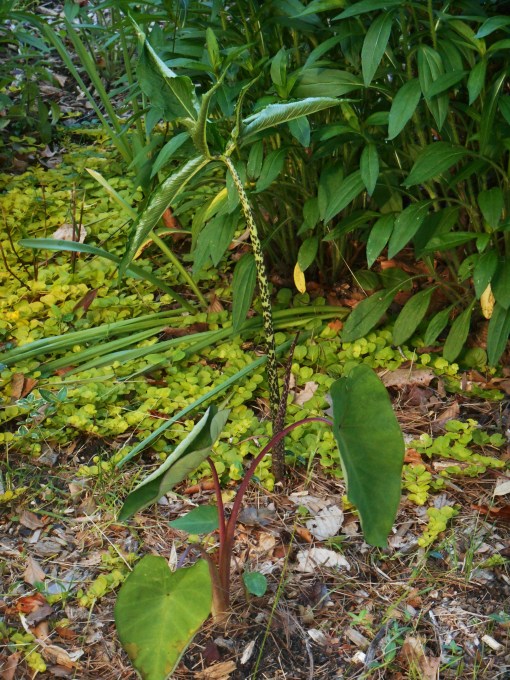 Another Weird, Wonderful and Poisonous Plant

Its name says it all:  Sauromatum venosum.  Get it?  Venosum?

It is also called “Voodoo Lily” because it begins to grow, as if by some strange magic, without water or soil.

That is how we found it, actually.  It wasn’t on my shopping list per se…

A second of the several tubers we purchased, planted about 18″ away from the first.

But as we were browsing the summer flowering bulbs offered in Brent and Becky Heath’s bulb shop yesterday, there they were:  the already growing flowers of Voodoo Lily reaching out of their bin for our ankles.

They put me in mind of cats reaching through the bars of their little cages at the animal shelter, vying for attention and maybe a new home….

How could I ignore them?  Some of these flowers were already more than 18″ long, poking out of the holes in their little red mesh bags.  Phototropic, they were reaching for the light.  They were ALIVE!

This was the only barely growing tuber of the lot… which is how I missed planting it last night.   It went into the lower fern garden this morning.

Actually, some weird plantophiles (much like yours truly) will buy these Voodoo Lily tubers and simply set them, dry, on a shelf to watch them grow.  They will grow happily for weeks on the energy stored in their tuber.  Eventually, one must plant them up, of course.  Which is what I did with these poor little guys last night.

See? Not a hint of a root…  Like a Caladium, this is a tuber, not a true bulb.

Keep in mind they’ve been growing in a bin of bulbs on the floor.  One mustn’t expect too much yet in terms in statuesque form.  The flowers will grow several feet high, open, release a putrescently musky scent for a few days, and then die back.  The scent is to attract the right insects for pollination, of course.

This flower stalk is only just getting started. It will grow to several feet high before dying back to the ground. Leaves will follow in early summer.

Once the flowers have died back, one or more leaf stalks emerge and add a lovely tropical note to the garden for the remainder of the season.  Native to Africa, Sauromatum venosum remain hardy from Zone 7 south.  They will spread by tuber and by seed indefinitely.  Phototropic, they will reach for the light if grown in too much shade.

I hope that as these little guys get established and sink some roots into our garden soil, the flower stalks will lift themselves and continue growing towards the sun.  Plants will do amazing things, given the opportunity.

Whether the flowers right themselves or not, the leaves will still emerge properly by early summer and offer some interesting foliage in the garden for several months.  They will die back with the fall frost, but the tuber can remain in the garden, mulched, over winter.

Yes, another stump garden. I’ve been planting around the stump of a peach tree we lost in 2010. That is a Hellebore to the right, also poisonous. A deciduous fern will emerge soon, and the ‘Voodoo Lily’ will complete the set. I’ll add compost and extend this garden outwards bit by bit as the plants fill in.  The decaying stump retains moisture and feeds the plants as it and the tree’s roots decompose.

Poisonous plants don’t get eaten by miscreant deer who sneak into our garden for dinner.

I’m becoming something of an aficionado on poisonous plants.  For more on this, you might enjoy an earlier post titled, “Pick Your Poison.“

After losing our early investments in Phlox and lilies, roses, impatiens, holly shrubs, tomatoes and Camellias; we realized that tasty plants disappear in the night.  Poisonous plants manage to grow all season.

These N. “Katie Heath’  were hybridized by Brent Heath and named for his mother. These have been growing in our garden for several years now.  We continue to plant lots of new daffodils each year to protect other plants, as every part of a daffodil is poisonous.

So now it is a bonus when I find beautiful plants for the garden which also happen to be poisonous.  Like Hellebores and daffodils, all parts of the Voodoo lily are very poisonous.  Not only will they not get eaten to a nub; their roots offer protection from tunneling voles to nearby plants.

So there you have my take on the very weird, wonderful and poisonous Voodoo Lilies we brought home yesterday from our shopping excursion in Brent and Becky’s Bulb Shop at their farm in Gloucester.

I’ll show you follow up photos of these lilies as they grow.

A pair are planted at the top of the garden, visible from the street.  If you’re in the neighborhood, you can keep a watch on them as they come along.  And if you smell something like rotting meat when you pass our garden, you’ll know they have come into full bloom. 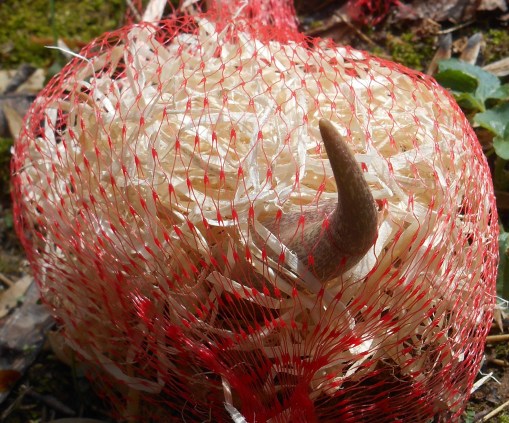