Winter is already closing in on so many parts of the country, bringing snow to areas where the leaves haven’t even fallen.  With less than a week left in October, every soft, warm, late autumn day feels like a bonus day on the season.

It has looked like rain all day, with only an occasional glimpse of sunshine breaking through the gloom; perfect weather to putter around outside.  And ‘putter’ is a good description of the bits and pieces I’ve strung together to make a day.

I’m in process of digging Caladiums.  It is always tricky to catch them before they fade away, leaving no trace of where their plump rhizomes lie buried.  But just as they leaf out on their own varietal schedules, so they fade according to their own rhythms, too.

While many in pots still look very presentable, and I’m procrastinating on digging them, others have already slipped away.  I need to sit awhile and study photos of their plantings to dig in the right places to recover them.

Today hasn’t been much more productive, I’m afraid.  Until the forecast calls for colder night time temps, I won’t feel motivated to begin hauling in the pots and baskets.

And yet the signs of autumn are all around in the brown, crinkly leaves skirting the drive and softly gathering on the lawn.  Bare branches come into view all around the garden, as their leafy garments slip away for another season. 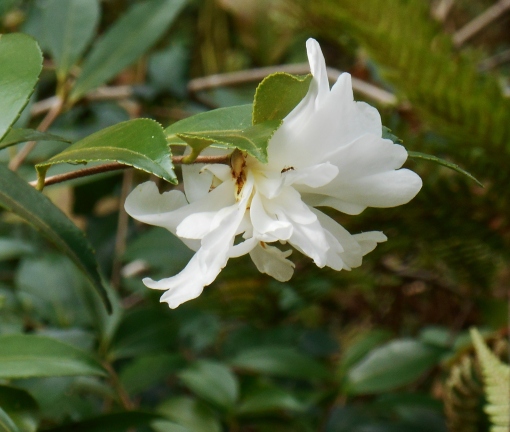 Instead, I’m watering, admiring.  I spent a while potting up Arum tubers in the basement, and planting Violas from their 6 packs into little pots, to grow them on.

These are the bonus days when I can daydream about where I’ll plant them, even as summer’s geraniums and Verbena shine again with their vivid cool weather blooms. 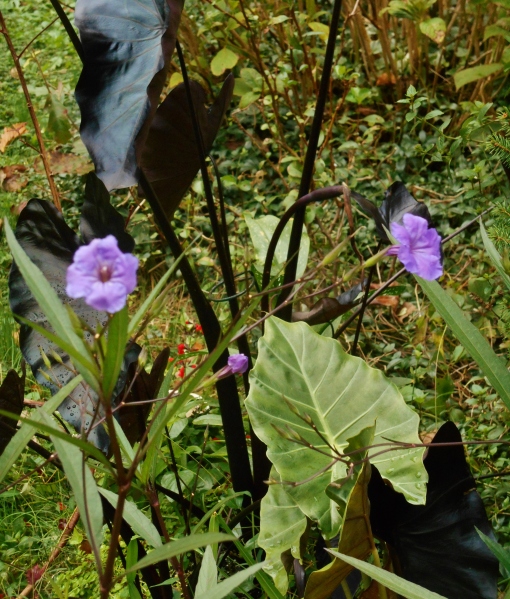 It is a relief, quite honestly.  The plants have perked up in the cooler, damper weather of the last two weeks.  The Alocasias are sending up new, crisp leaves.  The Mexican Petunias bloom purple as the pineapple sage proudly unfurls scarlet bloom after scarlet bloom.

Every sort of little bee and wasp covered the Salvias yesterday, reveling in warm sunshine and abundant nectar.  A brilliant yellow Sulphur butterfly lazed its way from plant to plant, bed to bed, and I found some fresh cats here and there.

The Monarchs are still here, though I’ve not seen a hummingbird since early October.  Perhaps they have already flown south.

Like a band playing one more encore, reluctant for the evening to end, and then leaving the stage to party on with friends; I’m reluctant to admit the season is nearly done.  I don’t want to rush it away, in my haste to prepare for the coming winter.

It is a calculation of how many hours, days, weeks might be left of bonus time, before the first frost destroys all of the tenderness of our autumn garden.

I’ve been content to admire it all today, and make a few efforts to prepare for the changes to come.

Flocks of goldfinches gather in the upper garden, feasting on ripe black-eyed Susan and basil seeds left standing.  Pairs of cardinals gather in the shrubs, sometimes peering in the kitchen window or searching for tasty morsels in the pots on the patio; sociable and familiar now in these shorter, cooler days.

We rarely have frost until November, here in coastal Virginia.  But colder weather is on its way.  Snow this week in Texas, and Oklahoma, and a cold front on the move promise changes ahead.   I’m hoping that we’ll have a few more sweet bonus days, before ice transforms our garden’s beauty into its bony, frost kissed shadow.

Begonias and ferns sparkle in today’s dim sun, enjoying another day in the garden before coming indoors for winter.

“The strangeness of Time.

Not in its passing, which can seem infinite,

but in the sudden realization

that something finite, has passed,

Fabulous Friday:  Happiness is contagious. Let’s infect one another.