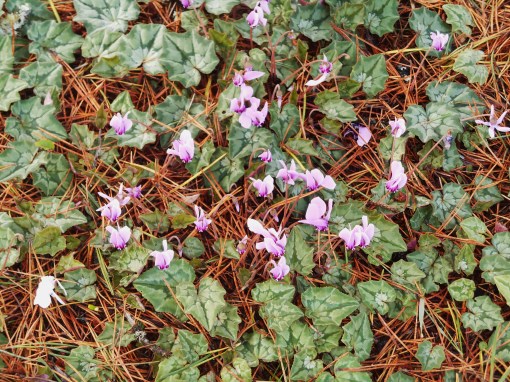 Naturalized Cyclamen hederifolium at the Connie Hansen Garden in Lincoln City, OR are already in bloom in mid-October.

Cyclamen are just one of those delicate, special plants that we delight in growing.  Their intricately patterned leaves and sculpted, sometimes fragrant, flowers are some of the most novel and beautiful among common potted florist plants.  I generally buy a florist Cyclamen in early December and enjoy it on my kitchen window sill through late spring, when it begins to die back for its summer period of dormancy. 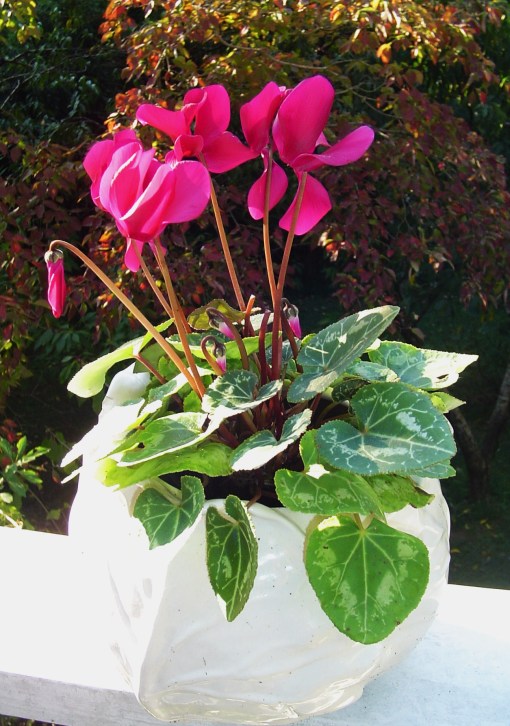 Discarded from the kitchen windowsill in June, this Cyclamen re-bloomed  out on the deck in the fall of 2013.

As much as we enjoy the tender florist’s Cyclamen, Cyclamen persicum, I have been seeking out other, more hardy species, too.

Cyclamen persicum is native to the Middle East, parts of North Africa, and some Mediterranean Islands.  Although it is frost tender, it still prefers cool growing conditions and thrives when kept in medium, indirect light in a spot where night time temperatures drop down into the 50s F.  It wants to go dormant once night time temperatures rise into the upper 60s and 70sF.  I grow it in a windowsill to give it the coolness it needs to keep blooming.

I first began growing Cyclamen hederifolium, which blooms in late autumn into early winter, and Cyclamen coum, which blooms in late winter to early spring, a few years ago.   I was inspired by the Cyclamen I found growing at the Connie Hansen Garden along the Oregon Coast, and then discovered that they are readily available from Brent and Becky’s Bulbs, and other bulb dealers. 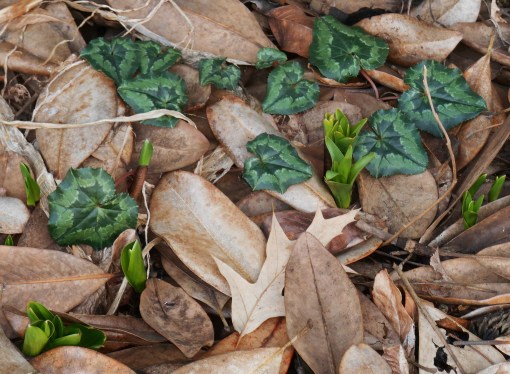 Hardy Cyclamen and bulb foliage shine through the leaf litter of a perennial bed at the Heath’s display garden in Gloucester, Virginia in February, 2018.

Cyclamen grow from tubers.  Like other geophytes, they go dormant each year and will live on in a dry state with neither roots nor leaves.  If you want to buy Cyclamen , you may purchase seeds, tubers or living plants.  While seeds are relatively inexpensive, it will take a few years to grow your plants on to a good size.  There are more flowers with each passing year as the tubers grow larger.

Many experts recommend buying your hardy Cyclamen plants in leaf, so that you can see the color pattern on the leaves and the color of the flowers.  Others just say they have experienced more success in getting plants established in that way.

Once you have a plant or two, they will produce viable seed.  You can collect and sow the seed, or trust insects to spread it around for you.  New Cyclamen plants will emerge  in following years from seed, even as the original plants continue to grow and expand. 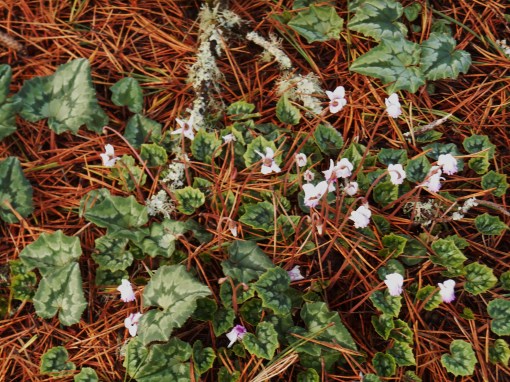 I order tubers for hardy Cyclamen , which is also an easy way to start a patch of your own.  I have planted directly into the ground in years past, and I’ve planted tubers into our large ceramic pots outdoors, as part of my autumn planted winter arrangements.

Although I’ve had some success, I’ve had disappointments, too.  These are very small plants, and can easily get lost under leaves and under other, larger plants.  They tend to show up best when planted among the exposed roots of mature trees.  I didn’t know that when I planted the first batch out into the garden.  The area where I first planted them has since filled in, and so our patch is less than spectacular.

I’ve sited later plantings in better spots.  But again, one needs to clear away fallen leaves and other, faded plants to really see and enjoy Cyclamen planted in the ground.  The Connie Hansen garden has their patch under a pine tree, in the middle of a concrete bordered traffic island in their parking lot, where little else grows.

Many successful gardeners suggest planting hardy Cyclamen among the roots of established trees because they thrive in the lean soil,  they prefer drier soil in summer, and they are shown off to good advantage.  There is room for seedlings to sprout and the effect in autumn and early spring can be spectacular. 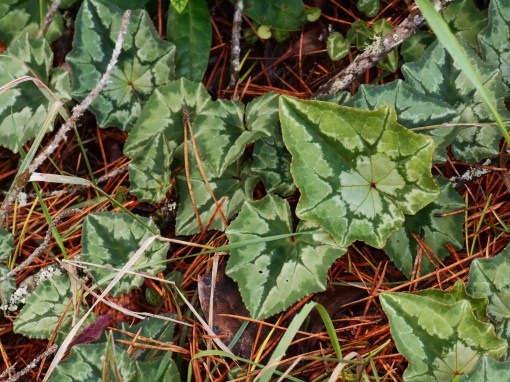 Last year, I planted most of the precious tubers I bought in large pots outdoors.  To make a sad story shorter, there was obvious digging in the pots in the week after planting, and I never did see any Cyclamen emerge.    I’ve since read advice to lay a sheet of 1/2″ chicken wire over the soil in pots, and cover it with some mulch to protect Cyclamen and other tempting tubers and bulbs.

So this year, I am trying a different approach.  I’ve bought a bag of both C. hederifolium and C. Coum.  C. hederifolium generally gives its best showing in its second and subsequent years from a tuber, because the season of bloom begins in autumn.  But I am planting five of each, just to see what I can do with them. 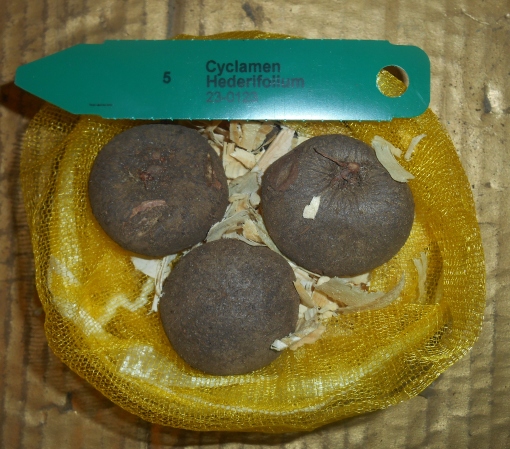 Plant the tubers concave side up. If you can’t tell, plant the tuber on its side and let the plant sort itself out as stems and roots begin to grow.

The challenge in planting tubers is that they want to be planted very shallow; with only an inch or so of soil and mulch above the surface of the tuber.   That is a screaming invitation for rodents to grab a snack, especially if they’ve watched you plant or see the disturbed earth!  Once the tuber is rooted and attached, they have a fighting chance to survive! 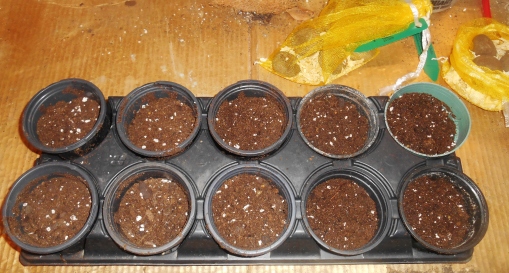 Fill small pots to within an inch or so of the rim with new, commercial potting soil.  Dust the soil with a little Bulb Tone or bone meal to get the Cyclamen off to a good start.  Cyclamen don’t require a lot of fertilizer.

I’ve planted ours in regular potting soil under about 1/2″ of soil and another 1/4″ or so of perlite.  I ran out of perlite and finished off the last few pots with vermiculite, which works equally as well.  You’ll notice that some of the C. Coum tubers already show evidence of the first few flower stems emerging from the crown. I hope that these will plump up and continue to grow as the tuber re-hydrates over the coming days.

This was even more pronounced on the tubers I bought last year, as I didn’t get them until early December.  I made a point of arranging to pick up my tubers this year within just a couple of weeks of when they came in to the warehouse to get the freshest tubers possible, and get them growing as early in the season as possible. 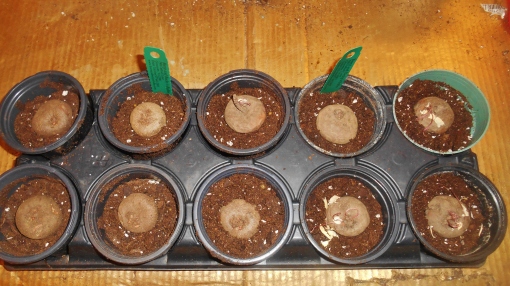 Our new tubers are resting tonight in my basement work area.  I’ll keep an eye on them, and move them up to a protected spot on the deck as soon as new growth appears.

Once the plants are growing well, and some of our summer plants have died back, I’ll plant them out where they can grow on through the winter.  This year I expect success with all 10 of our new little Cyclamen plants. 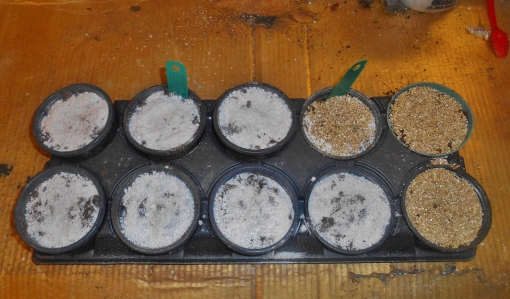 Water the pots well after planting, and then let them rest. They won’t need light until they begin to grow. Keep the plants evenly moist when they are in growth, but never let them sit in water.

To maintain your plants, dust with a little bone meal in the fall, and keep them evenly moist when growing.  Once they die back and go dormant, they prefer to spend the summer on the dry side.  Growth is triggered in autumn when temperatures drop and the weather turns a bit wetter.

It is such a pleasing surprise to see their first flowers and leaves emerge each year.  Hardy Cyclamen are a simple and inexpensive pleasure and well worth the small effort to grow them.  If you’ve not tried them before, this is the time to order a few tubers and try something new. 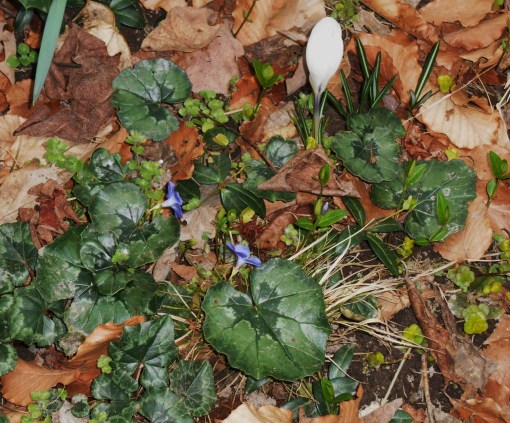 Our hardy Cyclamen were a welcome sight last February. 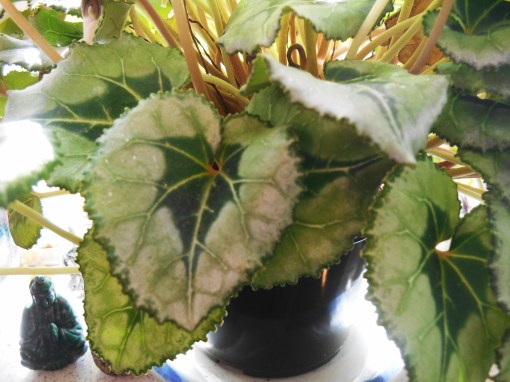 One response to “Growing Hardy Cyclamen”