Meet Carolyn.  Carolyn has apparently become a FOTF, because this is her third or fourth summer hanging out on our deck.  Properly introduced as Ms. Carolyn Whorton, she is reliably gorgeous and fun to be around from early May through at least November, when we let her have a bit of a rest until the following spring.

It is simply fabulous to watch our favorite Caladiums awaken and throw out their astounding leaves for another season.  Yes, thanks to Don Patterson at Classic Caladiums, we have figured out a reliable system to save our Caladiums year to year.

Some might wonder whether an older bulb makes a bigger plant.  The answer is yes, and no.  According to the Caladium gurus,  an individual Caladium’s mature height, coloration and the size of its leaves are determined by its genetics.

Some varieties grow taller, others remain much lower growing.  The leaf shape and size is also a function of genetics.  But within that genetic potential, how you grow a Caladium also determines whether it grows to its maximum size, or not. 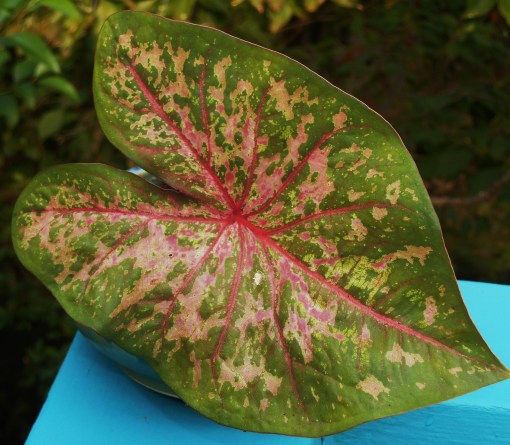 C. “Carolyn Whorton” grew from a tuber we overwintered. This variety can grow exceptionally large leaves on 24″ stems. Here, in September 2017

Of course good soil, steady moisture and a bit of organic fertilizer are good for growth.  But beyond that, shade loving Caladiums tend to grow larger in the shade, and remain more compact in bright light.   All of our saved bulbs began their re-awakening in large plastic tubs in our guest room.

I planted in early March, and they were sitting up on the bed, near a window and a lamp, by the third week of March.  And that is where they stayed…. perhaps a little too long…. because April here was too cold for them to go outside into the sunshine.

The stem in the middle holds this Caladium’s first flower. Like other aroids, the Caladium flower isn’t showy. Leaving it can drain off energy from leaf production, so many of us simply remove them.

And so they s..t..r..e..t..c..h..e..d…, trying to catch all they light they could, and also grew enormous leaves!  I remembered Carolyn from last summer, and so gave her her own pot and root room to grow early on in the transplanting process.  She has been out on the deck, in much better light, for most of May.

Some of her companions were still camping out in their plastic bin until early this week.  But they all have a place to grow now either in a garden bed or in a pot.

This bin of new Caladiums is ready to be planted out this week. The red leaf is C. ‘Burning Heart,’ a 2015 introduction from Classic Caladiums.  The white is C. ‘Florida Moonlight.’

Not so for all of our newly purchased Caladium tubers.  I planted most of them into bins, but potted up a few into individual peat pots when they arrived from Florida in late March.  I potted up a few individually for a friend, and decided to experiment with this alternative way to get a jump on the season with about a dozen or so of our new bulbs, too.

The results are clear:  our Caladiums in the bins are doing much better than those in individual pots.  I can think of at least three reasons why this is the case.

First, it is easier to maintain an even moisture content in the soil for the bulbs in bins.  I line the bin in paper toweling before adding soil, and that layer of paper wicks the moisture evenly throughout the bin.  The peat pots get a little dry, then when I water a little too moist, and back and forth as I remember to check on them, or not.

More of our new Caladiums are in process… the material on the soil is rice hulls, the packing material that comes with the bulbs.

The potted Caladiums also don’t have the advantage of soil mass to keep them warm.  Their temperatures vary, and maybe get a little cool, much more often than those growing in the bins.

And finally, I amended the potting soil used in the bins with a bit of Espoma Bulb tone before planting the Caladiums.  The pots have straight up potting soil.

C. ‘Highlighter’ and C. ‘Chinook’ were among the first of our new Caladiums ready to plant out this spring.

Now, it is clear to me, watching the new bulbs leaf out, that each variety takes its own time to come into leaf.  Caladiums planted the same day, into the same soil, and receiving identical treatment, take very different numbers of days to show their first leaf.

That is a little frustrating to me, as some of our Caladiums purchased this season haven’t even shown themselves, yet.  The first ones in leaf have gotten the choice locations around the garden, and I’ll have to figure out what to do with the latecomers, when they finally grow.

And my good friend who trusted me to start her Caladiums for her is still waiting to fill her pots.  At least half of her bulbs have poked a tip above the soil to show me they are alive…

The main difference in the size plant they produce will be seen in how many leaves each can produce at a time. 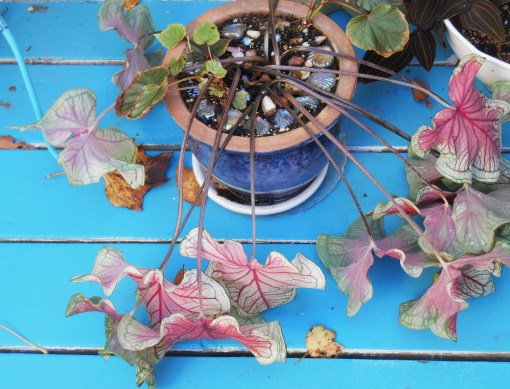 C. ‘Florida Sweetheart’ at Halloween, just before I brought her in for the winter.

But as you can see, ‘Carolyn’ has only two leaves.  Why doesn’t a grand dame like herself have at least a half dozen?

The answer lies in the idea of ‘dominance.’  The first eye to develop is the dominant bud.  It can chemically signal ‘wait’ to the other buds. 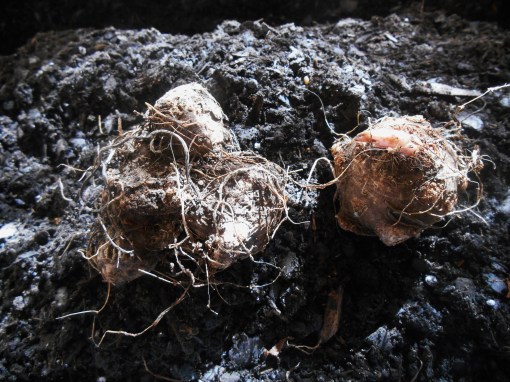 Caladium tubers ready for spring planting, with some buds already showing growth.  Remove the dominant bud, and a greater number of buds begin to grow.

Had I performed a big of surgery on the dominant ‘eye’ before planting the Caladium tuber, I could have stimulated more eyes to produce leaves right off the bat.  Maybe one year I’ll get around to playing with that….

But in this moment, we are happily enjoying the start of Caladium season.  It has been a slow grow this spring, but I am steadily putting a few more plants out into our garden each week.

Finally, a Caladium has replaced the fading Violas with this Japanese Painted fern.

As our Caladiums, Colocasias, Alocasias and Zantedeschias leaf out and bulk up, our garden looks a little more tropical with each passing day.  I am still learning about the magic ‘alarm clock’ combination of warmth, light and moisture that helps each genus break dormancy and awaken to a new season of growth.

But awakening they are, on their own schedules, and to our great delight.

Fabulous Friday:  Happiness is Contagious.  Let’s infect one another!