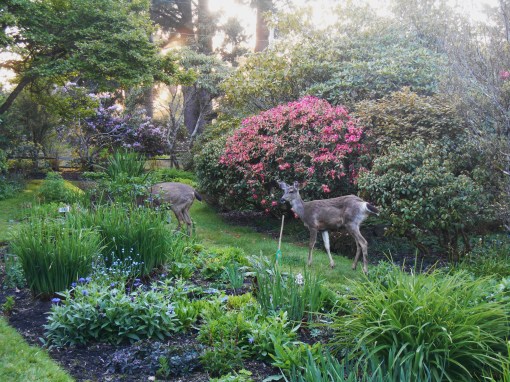 The Connie Hansen Garden, in Lincoln City, Oregon, where deer roam freely through the beach front community.  This beautiful garden remains open to the public – and the deer- year round.

A friend and neighbor, allies in our battle against hungry deer, first mentioned Milorganite several years back.  I’d never heard of the stuff.  She said she was trying it as a deer deterrent with some success.

She and her partner garden on one of the most exposed water front lots in our part of the community.  We collaborated together on our list of deer resistant plants, but I never followed up on her suggestion to try Milorganite.  Now I wish we had….. 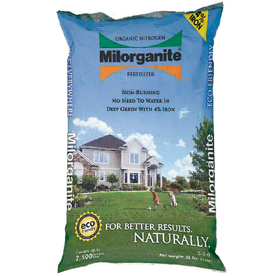 A year or so later, a Gloucester based landscaper suggested it to me again.  He recommended creating a barrier around one’s entire garden by broadcasting a 3′-4′ wide strip of the smelly stuff around the perimeter of any area you need to protect.  He swore deer wouldn’t cross it.  Sounded like a good idea; which I filed away to explore in more detail later.

Meanwhile, our personal battle to protect our garden from the deer continues.  It’s not just the plants we want to protect from their grazing.  Deer carry ticks, and ticks carry Lyme’s disease and other nasty infections.  We’ve both had several bites over the years followed by expensive visits to the doctor, tests, and prescriptions.

Lyme’s disease is one of those infections one never truly gets over; it can linger in the body and flare up later in unexpected ways.  It changes people’s lives in unpleasant ways; another reason to stay away from deer and ticks.  We figured this out, of course, only after we fell in love with the community  and bought our little forest garden.  We’ve learned a great deal since then. 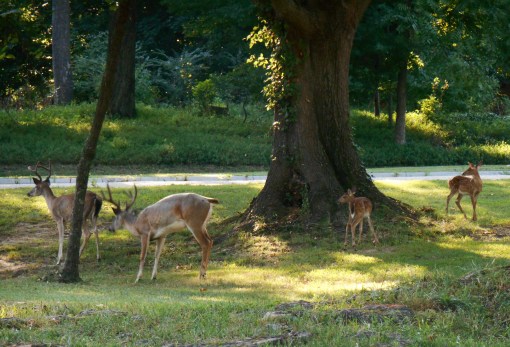 After nearly seven years of finding ways to foil the deer, a few somehow still slip into the garden from time to time.  And once in, they find tasties to nibble while spreading ticks and leaving their little ‘gifts.’   We’ve both had ticks latch onto us this spring, already. 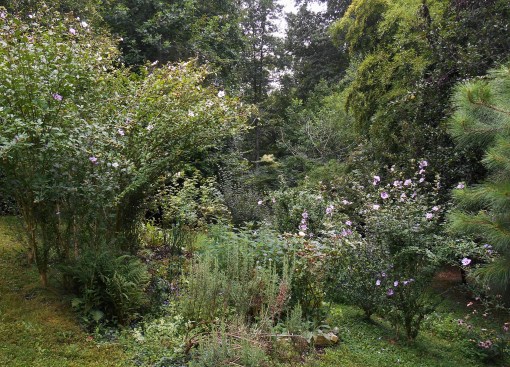 By mid-August, our garden grows in with plenty of temptations for grazing deer.

But a casual conversation with one of the garden experts at Lowes, earlier this week, reminded me of Milorganite.  She gardens on the Northern Neck, along the Piankatank River slightly north of Williamsburg.  And she contends with herds of deer, too.  She highly recommended Milorganite as a deer repellent in the garden. 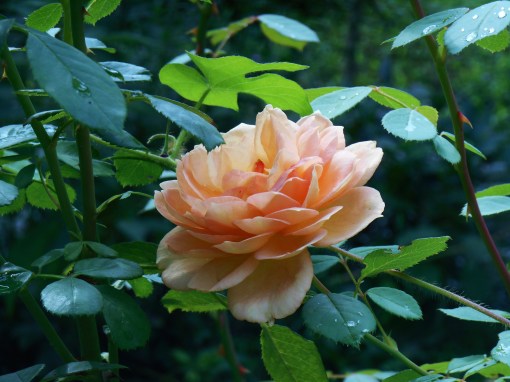 Now, before we go any further in this story, I need to share with you our real reason for avoiding Milorganite all these years.  I was all set to try it years ago until we learned its true nature:  municipal sewage sludge.  Somehow we just didn’t want to spread dried sewage all around our garden, despite its potential benefits.

Since 1926, the city of Milwaukee, Wisconsin, has processed the sludge from its sewage treatment plant to produce a 5-2-0 natural fertilizer known as Milorganite.  “Milwaukee Organic Nitrogen” was devised to reduce material in landfills while recycling this natural source of nitrogen as a safe fertilizer for lawns, golf courses, and agriculture.  The dried sewage is heat dried to kill bacteria and other pathogens, then pelletized to produce an easy to apply, dust free organic fertilizer.  But all the processing doesn’t completely remove the odor, which is why Milorganite repels deer. 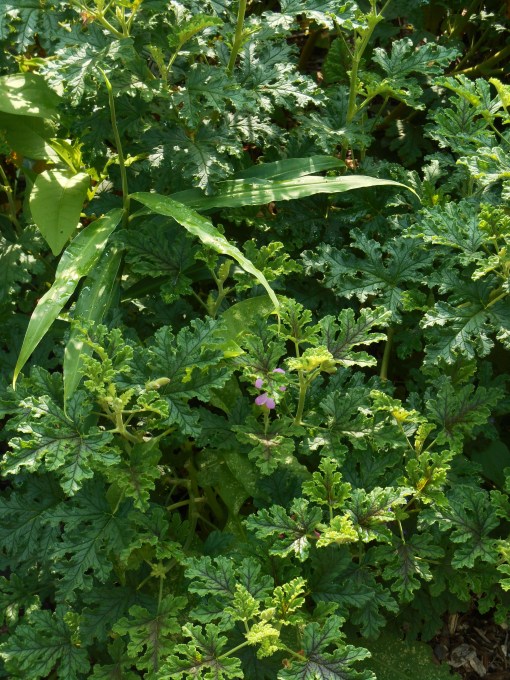 Rose scented geranium has proven a more pleasant deer repellent than sprays.  We plant scented Pelargoniums all around the garden to protect tasty shrubs and perennials.  They also repel mosquitoes, ticks, and other insects.

If you’ve bought a spray bottle of deer repellent lately, you know it’s very pricey.  Whether you buy Plantskydd , Repells- All, or some other product; you make an investment which often washes away in the next thunderstorm.

After resisting Milorganite these last few years, we finally decided to try it earlier this week.  The little guys have been slipping through our ‘deer fences’ and have already grazed some favorite roses and Camellias just as they leafed out this spring.  We are weary of chasing them out of the garden with no clue as to how they get in or out….

A 36 pound bag of Milorganite, enough to treat 2500 square feet, was only around $13.00 at Lowes.  On Monday afternoon we decided to give it a try, and bought a bag. Produced as a ‘slow release’ fertilizer, it lasts a long time before it completely dissolves into the soil.  How long will it work for us?  That is part of our experiment…. 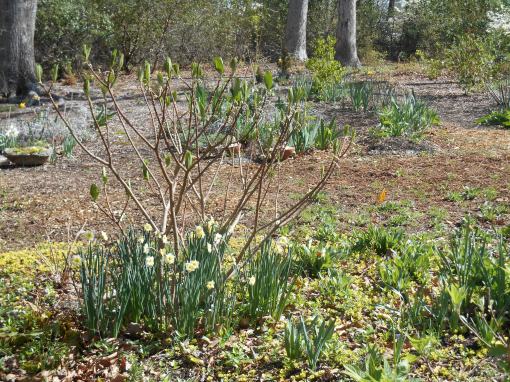 I suited up in my usual garden ‘get up,’ covered head to toe, with hat and gloves; and broadcast the first strip of Milorganite along our street.  Using a recycled plastic quart food container, I shook a light application in the spaces between our shrubs, and especially around the Camellias, from the pavement back to our deer fence behind the shrubs.

It wasn’t bad, really.  It didn’t smell as bad as the sprays we use, and was so much easier to apply.  Our single bag proved sufficient to broadcast a 4′ perimeter around our entire garden, and also to make barriers around vulnerable beds of Azaleas, roses, Hydrangeas, and perennials.  I laid a stripe everywhere we know the deer frequent in our garden. 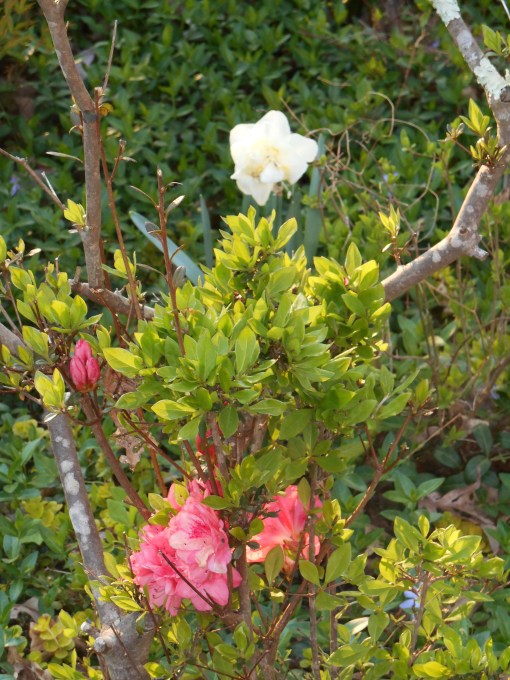 Azaleas once filed our front garden. In recent years, a growing herd of deer graze on what little remains.

Although the University of Georgia has published studies on Milorganite as a deer repellent, it isn’t marketed as one.  Its use to repel animals is a ‘word of mouth’ sort of thing between gardeners.  And how long a single application will last depends on any number of variables.  We plan to spread it again by the middle of June, then again in September.  Based on what we’ve read, it should last close to 90 days during the growing season.

Now we watch and wait.  My daydreams of full, lush Azalea shrubs and un-grazed roses may finally come true.  Our hopes to finally watch our Hostas mature, un-nibbled and full, may be realized this year.  Faith, hope and love wax strongest in a gardener’s heart in early spring, before realities set in. 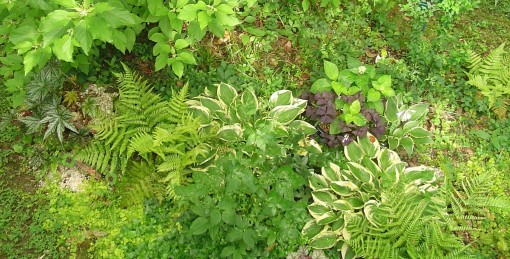 I’ll let you know how it works, of course.  If Milorganite performs as well as other gardeners have promised, we might actually plant a few vegetables later in the season with hope to harvest a cucumber or two!  I’m curious to learn whether it deters squirrels, rabbits, voles, and other mammals, in addition to deer.  If it does, we will use it faithfully from now on. 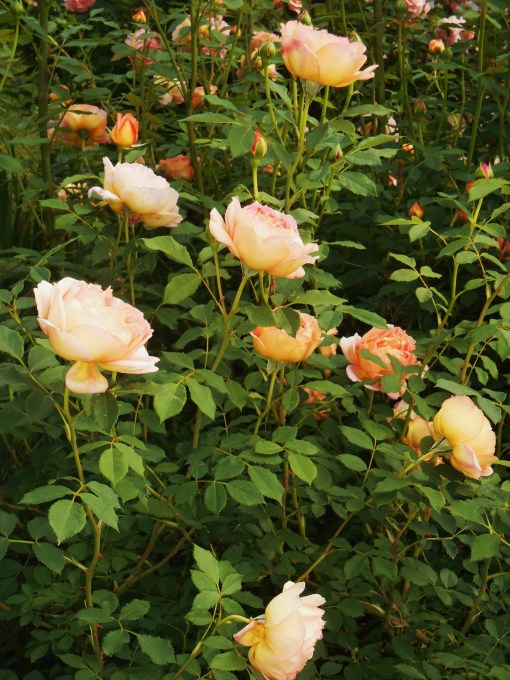 We may be holding our noses, metaphorically speaking, but we’ll gladly support the city of Milwaukee in their recycling efforts.  And we’ll spread the word as broadly as we spread the Milorganite!

Have you tried Milorganite in your garden?  If you have, how well does  it work for you? 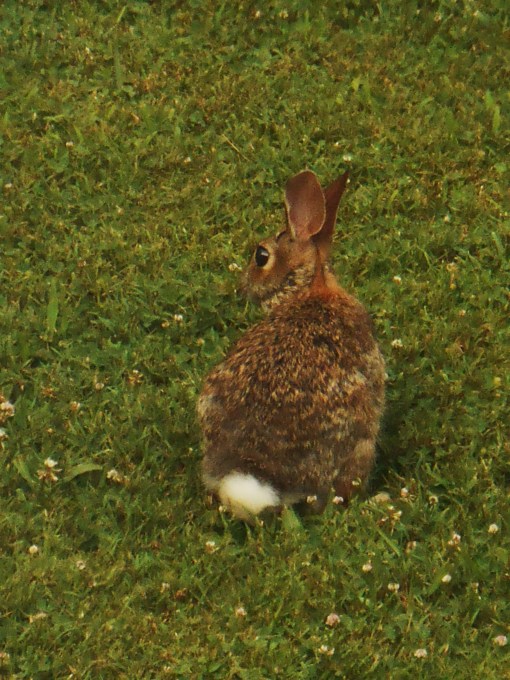 In recognition of Wildlife Wednesday

(Tina has posted some lovely photos of birds visiting her garden this month.

Please visit her for links to other Wildlife Wednesday posts this April.) 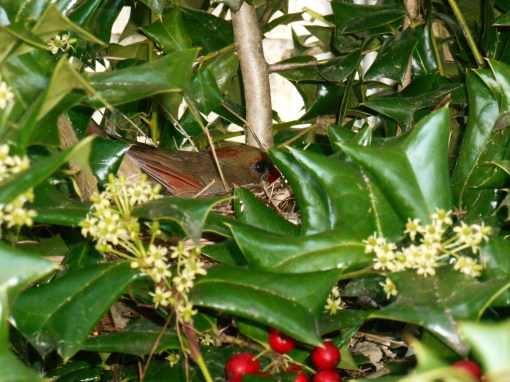 A mother Cardinal built her nest by our kitchen door. We feel honored by her trust.

26 responses to “Our Latest Experiment: Milorganite”