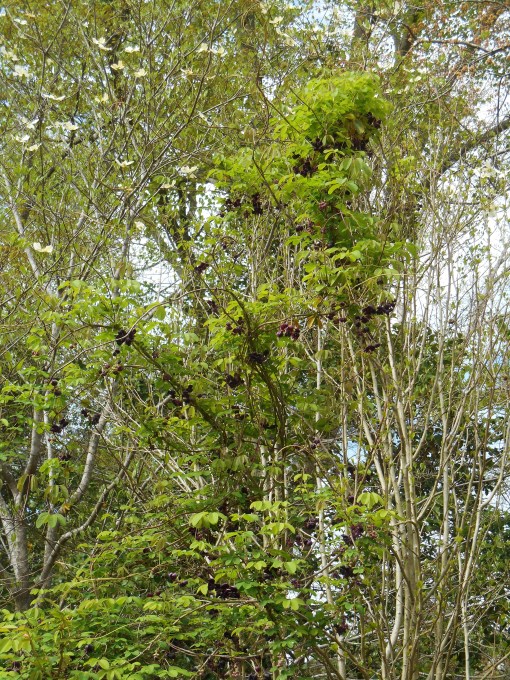 Do you plant vines in your garden?

I planted this chocolate vine, Akebia quinata, on a whim about four years ago.  It was one of those unusual plants in the winter catalogs which caught my eye, and so I ordered one.  It is one of the many flowers blooming in our garden this week.

Native to Japan, Korea, and China, this useful vine was smuggled out of China in 1845 by Scotsman Robert Fortune, who brought it to Britain.  Akebia quinata, so named because each leaf has five sections, was brought on to the United States some time after that. 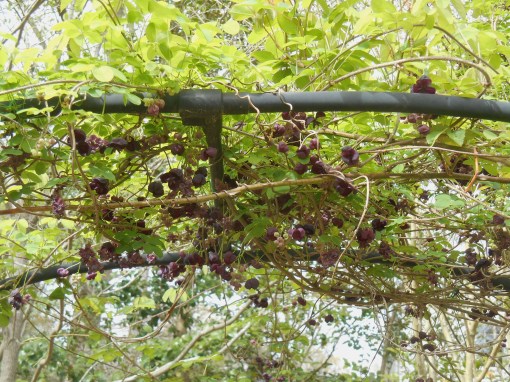 Does Fortune’s name sound familiar?  He is famous for smuggling plants out of China and back to Britain.  He brought the first tea plants, and knowledge of how to cultivate them, out of China and to India in 1848, on behalf of the British East India Company.    He was responsible for the tea industry in India, where tea had not previously grown.

The Akebia quinata vine has been planted enough now in the United States that it has naturalized along the East coast and as far west as Oregon.

Each vine, which may grow to 40 feet, bears both male and female flowers. The female flowers will often form sweet fruits in autumn.  I say ‘often’ because our vine hasn’t yet borne fruit.  Not only are the fruits a sweet treat, but the woody vine may be used medicinally.  The leaves of this vine are sometimes used as a tea substitute, and the new tender growth of the vines may be eaten. 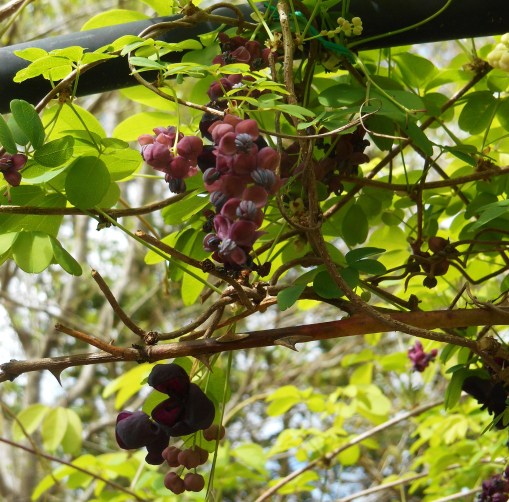 The larger flowers are female, and may eventually form fruits in late September and October. The smaller flowers contain the pollen. Some catalogs specify that two vines are needed for fruit production, and we have only one.

Some smell a chocolate fragrance in the vine’s flowers.  Others identify the fragrance as more like allspice, or lilac.  It may also be called a ‘chocolate vine’ because the flowers are such a dark and dusky purple color in some cultivars.  The fruit, which is also purpley brown, may be eaten raw or cooked.

The husk of the fruit may be stuffed and fried.  The fruit is high in both protein and Vitamin C.  The seeds are about a third oil, and the oil is rendered in Asia for making soap and for cooking.  The vines may be woven into baskets.

These vines may be grown on a trellis, up into a tree, or allowed to scamper as an attractive ground cover. 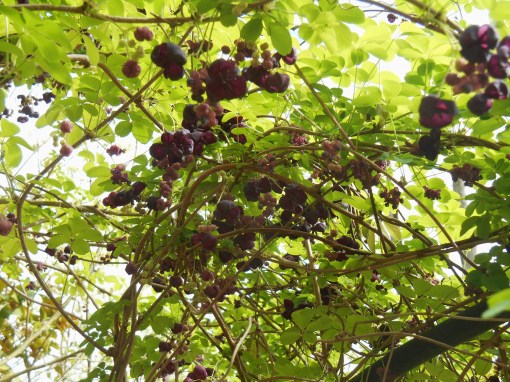 This plant was unknown to me when I ordered it, but I enjoy it in the garden.  It grows as a hardy woody perennial, hardy in zones 4-8, and keeps a few of its leaves each winter.  It has gotten scant attention beyond a little training and a dusting of Rose Tone each year.  It shares its trellis with roses, and so benefits whenever I feed them.

I enjoy it for its spring flowers, its beautiful vines, and for the spectacle it has made in this part of the garden.  It has long since left its trellis to scamper up into nearby trees.  Now it is also branching out at the base and scrambling over the ground, which is fine.  It has never been grazed by deer or rabbits in our garden. Although it can grow in full sun, it prefers partial shade and moist soil. 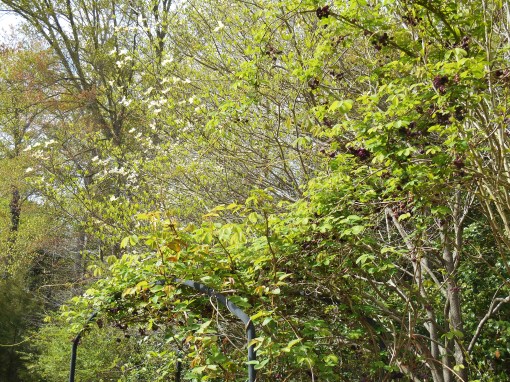 Some areas consider this beautiful and useful Akebia quinata an invasive plant.  It isn’t considered invasive in Virginia, and in fact, I don’t recall ever seeing it growing here wild.  If you have been looking at it in the winter catalogs, and considering whether to buy it, it might be worth the money.  As with many plants which can grow quite large, you need either the space to let it have its way, or you need to stay after it with the pruners.

It is still cultivated in Asia as a food crop, for its fruits, seeds, and tender new growth.   When a plant is beautiful, edible, hardy and easy to grow; it gets high marks from me.