A redbud tree in full bloom grabs my attention like no other spring blooming tree.  They just light up suddenly, like a neon beacon in the edge of the tree line; transforming from non-descript to gorgeous in the space of a day.

This North American native, Cercis canadensis, grows wild in our woods.  Although there are a few cultivars available, including a white variety, the species pleases me just fine.

And unlike many of the spring blooming fruit trees which show visible buds for weeks, waiting for the winter to pass; the blossoms of a redbud tree simply break directly out of the bark, anywhere and everywhere.  It is an amazing sight to see in early spring.

Never particularly large, these trees survive to an advanced age.  And as they age, they keep growing and blooming year to year despite all manner of scars, injuries, and chaotic growth.  They have that courageous spirit of perseverance which expresses the heart and soul of springtime’s beauty.

The redbud remains a quintessentially American tree.  They grow from The Hudson Bay south to the Gulf coast in eastern North America. 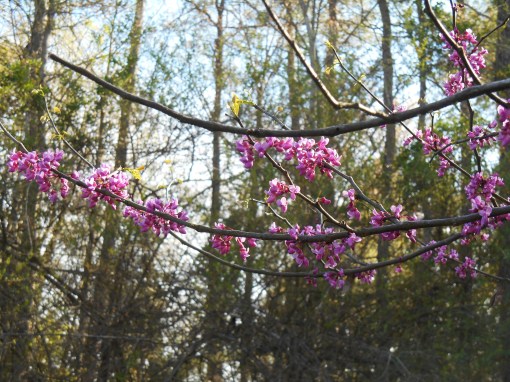 I’ve grown up loving them every spring of my life, save one when I was in Europe in April and missed them.  They bloom soon after the Forsythia each year, but several days before the Dogwood’s buds open. 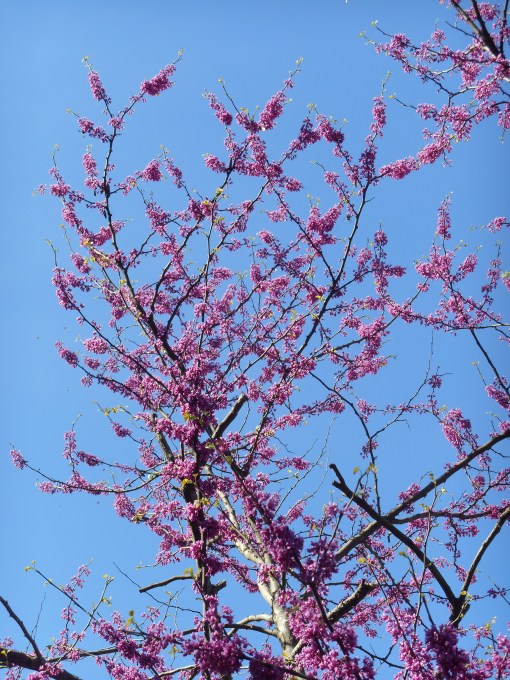 Their flowers appear days before their leaves.  They bloom when the forest remains mostly bare, with just a hint of green haze as the leaves of larger trees break bud.  Their flowers feed bees and other nectar loving insects in early spring when there are few flowers in bloom.

Mature redbud trees may grow wider than they grow tall.  Never growing more than 20 to 30 feet, redbud remains an understory tree, growing in the partial shade of the forest’s edge and around homes.

After their flowers fade, beautiful heart shaped leaves appear, followed by seed pods which look like Asian pea pods. The leaves turn gold in autumn before they fall.

The redbud is a member of the pea, or Fabaceae family.  The flowers and seedpods are edible, and parts of the redbud tree were used by our Native Americans for food.  I’ve heard that their seedpods are good in salad, but can’t say I’ve tried them myself…

Every flower, once pollinated, forms a seed pod.  You can imagine that in a few months time the pods hang thickly from the branches.

And every pod contains several seeds, tasty to wildlife.  So many seeds form, that many survive to germinate.  The trees grow very quickly.  They shoot up in just a few years to get their branches high enough to catch the sunlight through the surrounding growth.  Slowly, they begin to fill out their rounded canopies as the years go by.

Redbud trees also help improve the soil and nourish other plants.  As legumes, members of the pea family, they can fix nitrogen, taken from the air, in the soil around their roots.  Their fallen leaves and seed pods also feed the soil as they decompose each winter.

We were happy to find several redbud trees in our garden here.  We have one very large old one in the back near the ravine, and several much younger ones along the street.  We spot a new one in bloom every year or so, and I’ve planted at least two over the past few years.  One was a seedling sprouted in the wrong place, which I moved.  The other was a gift, which I grew on in a pot for a few years, before putting it into the ground earlier this spring.  Now it has just come into bloom for the first time.

Mid- April, when the redbuds are in full bloom, the Dogwoods are opening, and the Azalea buds have begun to swell, is one of my favorite times of the year.  The bare woody bones of winter burst into vivid flowers and cover themselves with tender green leaves.  What astounding beauty manifests all around us each April.

19 responses to “Our Native Redbud Tree”