I’ve gotten a head start on a “new” year.

Here is the first loaf of sourdough bread, baked from a newly made starter, in a brand new Dutch oven given to me for Christmas.

The entire house is perfumed by this wonderful bread.

Both of these speak of time as an essential ingredient to baking good bread.  They introduce some new techniques and ways of making dough I have only just begun to learn.

I love beginning a new year with learning something new!

The bread I’ve baked today began a week ago when I mixed some rye flour (a gift from a friend who chose to shift to a gluten free diet) with some bottled spring water, and set it aside to come alive.

Rye flour harbors some specific yeasts and bacteria which when activated, will grow into a “sourdough” culture or “levain.” 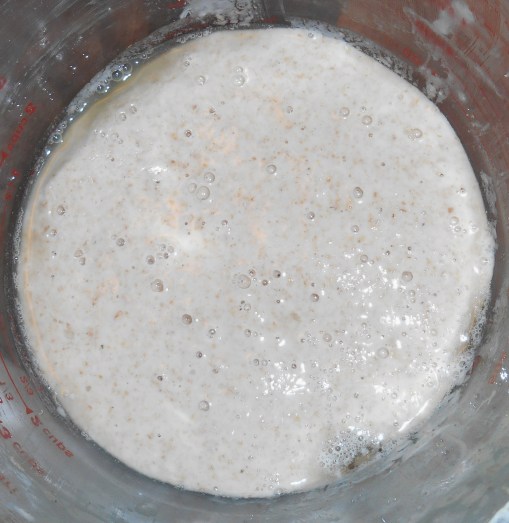 On the third day I divided my culture in half, giving half to another baking friend, and continued to feed the culture with flour and water.

By Friday the culture was ready to leaven a batch of bread dough.  When I divided the culture to feed it, half went into the bowl to serve as the basis for bread.

I also finally purchased Ken Forkish’s Flour Water Salt Yeast,  and set about reading beyond the “sample” to dig into his techniques and recipes.

I didn’t follow his recipes for this bread, but I followed many of his principles.  I made a well hydrated, loose, dough; “folded” it several times during the rise, and allowed it plenty of time to rise slowly.

Translated:  The dough was much softer and wetter than I normally make it.  I let it rise for about four hours on the counter, and then put the dough into the refrigerator, in a covered bowl, for an additional 36 hours before forming the loaf early this morning.

Once formed, with plenty of extra flour used in making the loaf, I let it rise an additional four hours before beginning to bake the bread.

This bread is leavened only with the “sourdough” levain.  There is no additional yeast.

And the ingredients list includes only flour, water, honey, olive oil, and salt in addition to flour and the levain starter. I brushed the loaf with melted butter and sprinkled sesame seeds and sea salt on the top crust before baking. 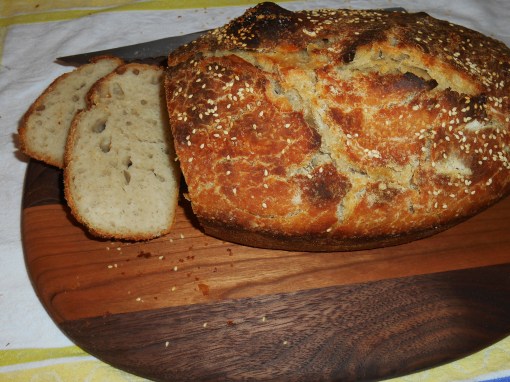 Bread board by Michael Laico.

It is the soul of simplicity:  bread made as our grandmothers made it in the centuries before we could purchase yeast at the grocery store!

What was old is new again….

12 responses to “Something New”