Powhatan Creek winds its way for nine miles  through southern James City County; a narrow and twisted passage of dark brown crystal clear water which threads through neighborhoods and crosses the Colonial Parkway before reaching the marshes of Sandy Bay and the Black River,  finally emptying into The James at The Thoroughfares.

Fed by natural springs, Powhatan Creek’s water  gets its dark color from tannins released by Bald Cypress trees which line its banks and grow in the swampland it feeds.

The lower portion of the creek is tidal, with salt water from the James River mixing with the creek’s fresh water as the tides shift each day.

Bald Cypress trees, abundant along Powhatan Creek,  earn their name from their appearance in winter.

One of the few deciduous conifers, their needles turn rusty brown each autumn  and then blow away in autumn’s winds.  They produce new leaves each spring. 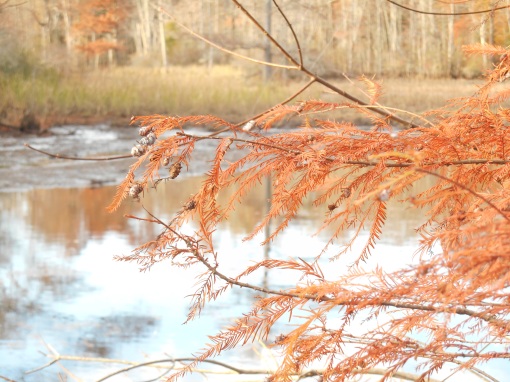 A Bald Cypress limb with cones, ready to drop its needles for winter.

This annual shedding of needles into the  waters where they grow,  keeps the creek very acid.  It doesn’t grow stagnant, although it is often slow moving and shallow.

Bald Cypress may grow where their roots are submerged year round, in tidal swamps, along the margins of ponds, rivers and creeks, as well as on dry land.  And they harbor many species of wildlife.

Powhatan Creek, rich in Cypress, pine, hardwoods, and many species of berry producing shrubs,  provides habitat for an abundance of wildlife.

Along the path from the parking area to the boat ramp and docks.

A good sized  graveled parking lot provides access to a boat ramp, trails, and several fishing platforms along the bank.  This is where we visit to take photos of this beautiful part of the Creek.

There is no charge to put a canoe or kayak into the creek here, and one may paddle upstream towards freshwater marshes at the Creek’s source, or downstream towards the Colonial Parkway, Jamestown Island, the the James River.

It is wise to check the tides before heading downstream, as the current grows stronger as you near the river.  It is always wise to come prepared for the weather and for hours out in a swamp.  You will  be surprised by the creatures you encounter along the way!

There is also a Powhatan Creek walking and biking trail , maintained by the county, which ties into other nearby trails and greenways.

This Bald Cypress, in the middle of the creek, is one of the tallest in James City County.

Powhatan Creek has remained fairly undisturbed over the years of our county’s development.  For one thing, it has a wide flood plain.  The ground isn’t good for building, and much of it is protected by the National Park service.

As you might guess, Powhatan Creek was  named for the leader of the nation of native Americans who lived on this land for centuries before the 1607 English settlers arrived.  Native Americans  depended on this waterway for food and used it as a major route for travel.

The early colonists used the Creek to travel inland, as well, and it has remained an important part of our county’s legacy and natural resources.

And it remains important to us today as a relatively untouched natural greenspace, still teeming with beautiful plants and unusual animals.  It remains an intact ecosystem, and one open for us to visit and enjoy. 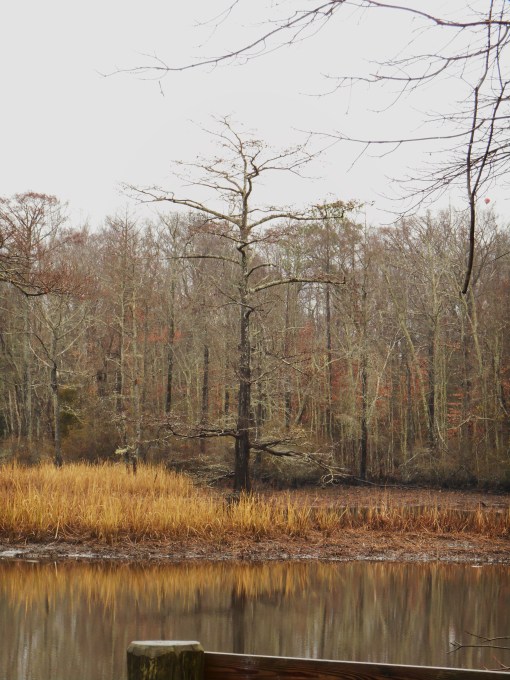