This morning found us out in the garden watering, pulling grass, deadheading spent flowers, and generally admiring the beauty around us. 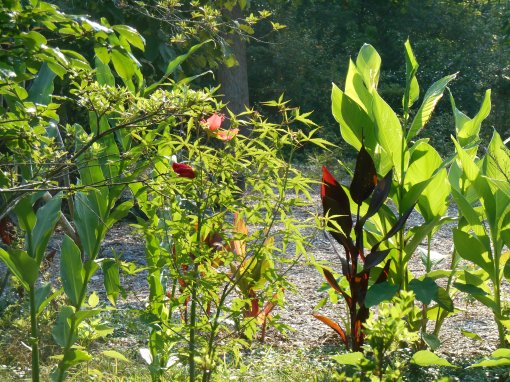 Morning sun shines through the Hibiscus and Cannas, illuminating their leaves like stained glass.

It was the sort of cool, breezy morning which invited one out of doors to enjoy the day; and to look around for things which need doing while enjoying it.

I’ve finally had a stretch of days at home, and have turned to pulling grass and weeds in preparation for some late summer planting and sprucing up. 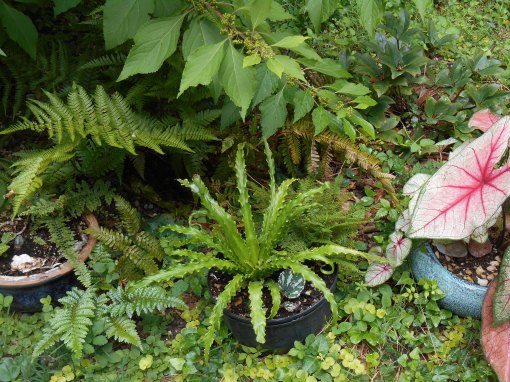 The first warning to go gently came from friend turtle.

One of our Eastern Box turtles had sought shelter at the base of a Dogwood tree, under the lacy canopy of grasses.

As I worked steadily closer to him, he made no noise and gave no sign of his presence.

When I finally pulled out the grasses sheltering him, he turned to look up at me, but stood his ground.  Our turtles know us by now, as the lizards do, and know there is nothing to fear so long as we see them.

Finally turning my attention to the stump garden, after a good watering, I worked my way around the bed trimming  spent Gladiolus stems, pruning the Catnip,  pulling the odd vagrant weedy growth, and trimming the Comfrey.

My attention was on the plants, and I almost didn’t see the delicate web of this  black and yellow garden spider, Argiope aurantia.

The sparkling drops of water caught on its strands caught my attention just before I cut one of the stems anchoring it.  What beauty!

My partner came over and we admired the web and two resident spiders for a while. 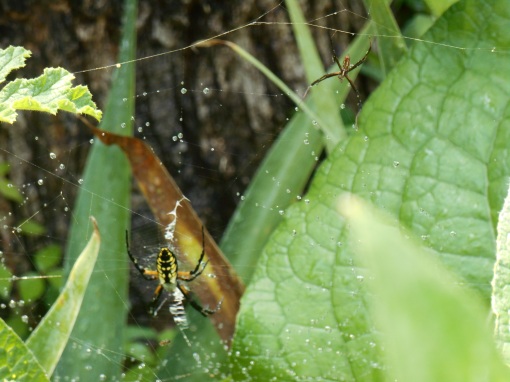 The larger female spider, with yellow markings, is joined on the web by a more slender male spider. These non-poisonous spiders garden spiders are common throughout most of the United States.

Large spiders like these begin to show themselves and cover the garden with their webs in late summer, here in Virginia.  It is nothing to find webs several feet across from  shrub to shrub sparkling with dew in the early mornings.

So long as our butterflies don’t end up trapped in the webs, we try to leave them alone and bless the spiders for each mosquito they can eat.

The signs of autumn have appeared all around us here in Williamsburg.

These cool nights and mornings feel more like late September than mid- August.  Dogwood trees along the Colonial Parkway have taken on a rosy hue as the chlorophyll fades from their leaves.

Sweet Autumn Clematis came into bloom this week, and our Tulip Poplar trees have begun to turn bright yellow and to drop their leaves.

It will be an early  and cool autumn across much of the United States.  Summer has been compressed this year between a late spring and an early fall.

The Devil’s Walking Stick, , Aralia spinosa, is in full bloom now, and is covered by bees. Notice the leaves beginning to change colors.

We have enjoyed the cooler summer, and we’ve had enough rain to make things green and lush here.

But this is not the year to sow late crops and expect to harvest them before frost.

Our mild weather has been kind to the roses this summer.

Cold winds will blow down from Canada and the Great Lakes with frost much earlier than most expect them.

But not for a while yet.  At the moment we are still celebrating the butterflies and hummingbirds who find our garden.

We’re encouraging the lizards to gorge themselves on insects, watching out for the turtles, and admiring the spiders’ weaving.

But I’ll show you the garden bed I’m rehabilitating in another post.

For now, let’s just enjoy this beautiful August weekend, and celebrate summer in our Forest Garden.