It seemed simple enough at the time:

I added three Colocasia esculenta tubers to my spring order at Easy To Grow Bulbs.  I was also ordering tubers for Canna Lilies and Gloriosa Lilies.

Easy To Grow Bulbs is one of my favorite online vendors.  Their stock is of high quality, their prices fair, their selection intriguing, and their customer service excellent.

A bargain at around $7.00 each, these huge tubers arrived healthy and ready to grow.

I filled plastic boxes with fresh potting soil and planted the entire order the day it arrived, carefully following the  enclosed instructions.   The instructions suggested planting about 8″ deep, so I used a deep Rubbermaid container.

I watered at planting time to moisten the mix, but then kept the lid on waiting for the plants to grow.

The boxes of dormant tubers were fine down in the workroom, where I could keep an eye on them.  I checked the soil several times, found it slightly moist, and so just gave them time.

After a few weeks, the Cannas were growing well;  so we moved them up to the garage where they could get some light.  It was still a little too cool to plant them out in the garden.

C. “Pink China,” ordered from The Michigan Bulb Co. This is one of the replacement plants they sent.

I could see root growth in the box with the Colocasia, known as Elephant Ears, but no top growth yet.

Finally our cool spring warmed up enough to plant the Canna Lilies out.  I had ordered Colocasia from several different sources, and also had one plant which grew in a pot all winter in the garage.

The others had arrived already in leaf, and so I moved them out to the garden a few at a time throughout May.

C. “Blue Hawaii,” wintered over in the garage.

Finally, a beautiful, strong leaf emerged on the Colocasia esculenta  grown from a tuber.  I moved the box up to the brighter garage, and waited for the other two tubers to leaf out.

Believing they probably needed more warmth, I took the box out to the garden one warm day in late May.  These were the last of the Elephant Ears planted in our new sunny border.

Still following directions, I dug three deep holes and amended them with compost.   I planted the leafed out plant first. 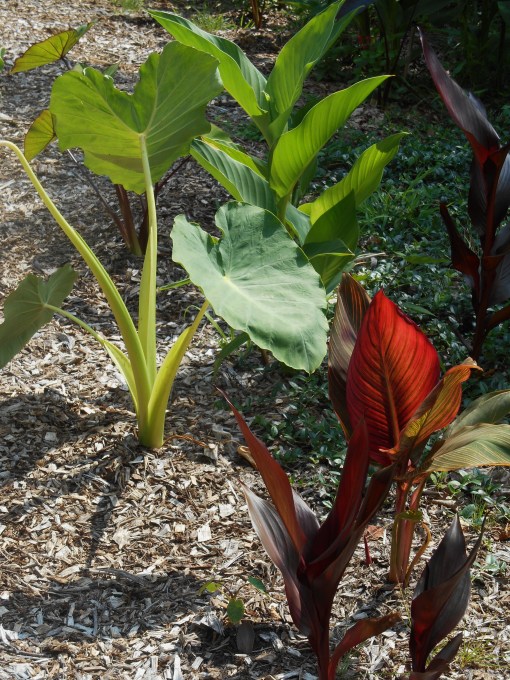 It had a huge healthy root system, and I tried to plant it at about the same level it had been growing in the box.

But here is where the mystery begins:  the other two tubers showed no evidence of growth.  I planted them anyway, believing they would begin to grow at any time given the warmth of early summer.

The tubers were all the same variety, and looked nearly identical when they arrived.  One would think that given exactly the same conditions, they would respond the same…. Wouldn’t you?

So I’ve faithfully watered my newly planted Cannas, Colocasias, Sages, and Hibiscus several times a week, when it hasn’t rained, to get them properly established.

And of course I’ve watered the spots where the tubers were planted- just to help them along.  After all, we all know that Colocasias like moist soil and need plentiful water to support their huge leaves.

So when no growth appeared by late last week, I was truly puzzled.  In fact, I was very naughty and gently dug into one of the planting areas to see what was going on.

On hands and knees, I dug around gingerly, expecting to hit a green shoot at any moment.  Until I hit a pocket of greenish beige slime….

The tuber had rotted.

How is that possible?  I did everything right, didn’t I?

This morning I called Easy To Grow Bulbs to talk with them about the problem with the Elephant Ears.  And I was delighted to meet a very knowledgeable gardener, and “bulb whisperer,” named Kathleen.  After listening patiently, and asking a few questions, Kathleen launched into teaching/ coaching mode and taught me something new.

She explained that although all of the tubers may look identical, they are all individuals, have their own genetic blueprint, and so will break dormancy on their own schedule.

Some may be a little earlier, some a little later.  It is actually a survival mechanism so that if an early frost comes, the later individuals will survive.

It isn’t unusual for some tubers to begin growing, while others wait another few days or weeks to break their dormancy and begin growing.

The time when they break dormancy is the tuber’s most vulnerable time, when a small factor can make the difference between growth and rot.

Like Caladiums, Colocasia enjoy moist soil when actively growing.  But, soil that is too moist, before their leaves have grown in , can easily kill them.

Kathleen reminded me that just as we humans must exhale, so tubers must be able to relieve themselves of too much moisture.

And that is where I went wrong.  When I planted the still dormant tubers out into the garden before they were growing, they were both wet and warm, and so rotted. 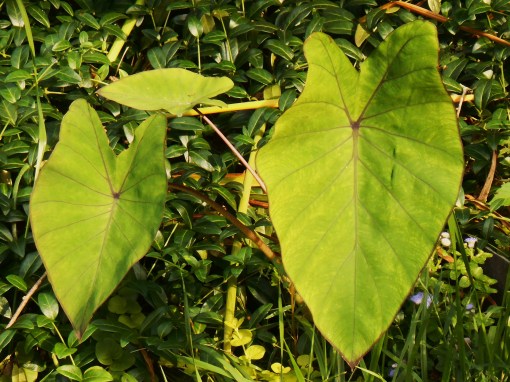 I should have planted out the one actively growing plant, but left the two dormant tubers in the original planting box until they showed top growth.  Each plant must be treated as an individual.   Lesson learned.

Kathleen was very understanding and patient, and put two replacement Colocasia tubers in the mail to me today.

And she gave me precise instructions on how to care for them until they break dormancy and are ready for their places in the garden.

I feel like I made a new friend today; and will absolutely turn to Easy To Grow Bulbs again, as I have so often in the past, for bulbs, roots, and tubers of all sorts.

I’ll save Kathleen’s instructions for another post when the tubers arrive, so you can see them.

You probably know that the tubers of Colocasia are a delectable staple of the Pacific Island diet.  Have you ever eaten Poi?  If so, you have eaten Colocasia.  The leaves are poisonous, but the tuber can be cooked, mashed, and eaten.

I would much rather grow them than eat them, and am looking forward to watching these enormous and beautiful plants grow.