And Then It Got Complicated…. 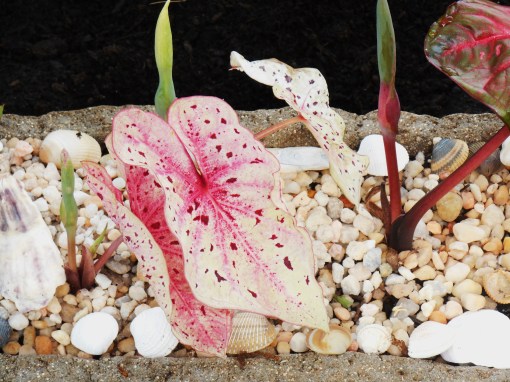 An inspiration, when it first flits into one’s mind, is beautifully simple.  In its purist form, the idea is more powerful than the forces which will conspire to prevent its materialization.

At least in my experience….

A vivid imagination is both gift and curse; tool and trap.

A gardener’s winter dreams of pots and beds and borders sometimes get translated into actuality; sometimes not.  Rarely do they grow as first imagined.

There is the small matter of reality standing between the vision and its accomplishment.

My original idea was quite simple:  I saw a raised bed growing at the base of a young Dogwood tree.

The tree, badly damaged when our trees fell last summer, would become the center point of a cool and shady four season garden in the edge of our forest near the street.

Populated with Cinnamon Fern and Helebores, this perennial bed would be impervious to deer, low maintenance, and provide winter blooms. 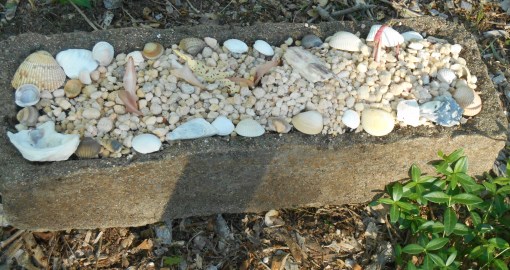 When imagining what to use  to build the raised bed, I decided to use Hypertufa troughs.  A gorgeous cardboard box shipped from Plant Delights became the mold for long window box shaped planters.

The first two un-molded perfectly and went to the drying shelves.  Then the third cracked as I turned it out of the box.

Heavy, and not quite dry enough, I realized I had rushed it; and made a patch.  After another week in the mold, I gingerly turned it out, and the patch held.

A second very large trough also cracked.  I must not have had the mix quite right that day. 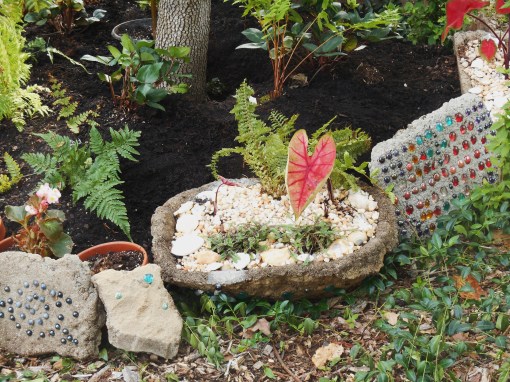 This large and heavy trough also cracked when I lifted it from its mold, but it was a clean enough break to patch. Can you spot the patch on the pot’s rim?  A chunk of another broken trough, which couldn’t be repaired, rests nearby.

I wasn’t as lucky with that attempt to “fix it,” and it ended up in a dozen jagged pieces tucked into a shadowy corner of the basement.  It gets complicated…

That temporarily halted work on the new raised bed.  With only two of the four planned troughs ready to use, I wasn’t ready to move forward.

Caladiums fill the hypertufa troughs used to border this raised bed.  The apparently empty pot is filled with perennial hardy Begonia, which will emerge by early June.

And I didn’t have time by then to start the fourth trough.

But, I already had three potted Helebores and three Lady Ferns languishing in holding areas, ready to sink their roots into a permanent spot in the garden.

Lady Ferns, you ask?  Wasn’t the original idea to grow large, stately Cinnamon Ferns in this bed?  Well, it got complicated…

On one shopping expedition after another this spring, my search for Cinnamon Ferns was in vain.

Yes, Plant Delights had them, but I wanted to purchase them locally.  I’ve learned my lesson waiting for bare root ferns from the big box stores to sprout, and I was hoping to score them in the tiny pots Homestead Garden Center offered all last season.  But, no tiny pots appeared…

A few badly grazed Azaleas fall along the perimeter of this new raised bed. Broken pot pieces help form a low “wall” to hold soil behind them.

Our long, cold spring made things very difficult for the growers this year, and many items came late, in short supply, or not at all.

So during my tour of Forest Lane Botanicals, I purchased three beautiful Lady Ferns to use in the garden… just before that third trough broke.  And they’ve been sitting ever since….

With the art festival completed over the weekend, it was decided that today I would work with the universe to bring this new raised bed into reality.

One way or another, something would be built today.

An experimental “stepping stone” holds back the soil behind a second Azalea shrub, forming more border for the garden.

Armed with three potted Helebores, three Lady Ferns, two Autumn Brilliance Ferns, four bags of compost, more Caladiums than I care to admit to having, an almost murdered Begonia which got too dry last week and lost its leaves, a tray full of broken Hypertufa trough pieces, some old plastic pots, and some 6″ clay pots left from the weekend- I set to work.

Some might call this a scrounger’s garden.  I see it as a fortuitous opportunity for some serious recycling. 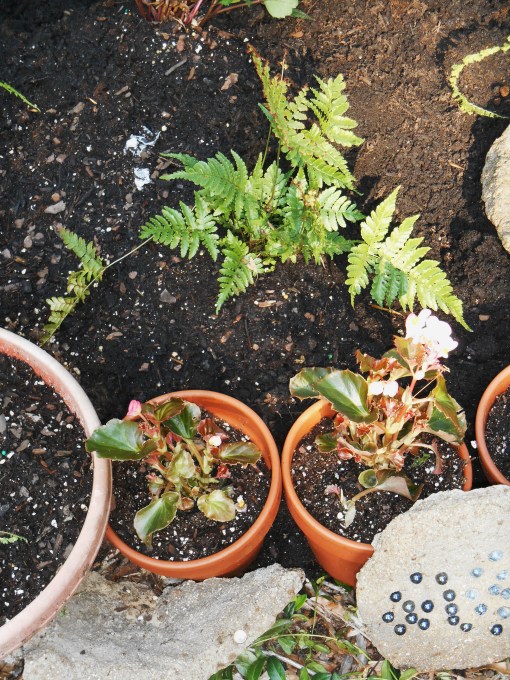 With three now completed troughs, already planted in Caladiums,   the outline of the new raised bed was already sketched in.

A larger free-form  hypertufa trough, again broken in unmolding but patched, joined the group two weeks ago when I decided not to offer the  patched pot for sale.  It also holds Caladiums.

With the fourth trough a minimum of two weeks away, if I cast it today; I decided to border the bed with other materials- if only temporarily.

So a pile of new 6″ terra cotta pots, scored at the Re-store for a children’s art project, got filled with soil, planted with Begonia semperflorens, and pressed into service as a border.

A few old plastic pots, filled and planted up, helped plug the gaps.

Sedum planted into a pocket made from a piece of the broken pot.

Large pieces of the broken hypertufa and a few experimental stepping stones work to camouflage this motley mix of bordering materials.

Borders in place, compost poured in and smoothed, it was finally time to plant.

The bed is far from completed.  That fourth trough will materialize over the next few weeks to complete the outline.

I don’t have much faith in small terra cotta pots on our hottest summer days.  They dry too quickly.

So I’ll replace as many of the small pots as I can with hypertufa planters, which keep roots cool, moist, and happy even in the heat of summer.

I found a 4″ Cinnamon Fern this afternoon, finally, and planted it among the Lady Ferns.

Over the next few days I’ll transplant some Hellebores seedlings from other beds, add a few more Caladiums, and possibly even plant some Spikemoss, a new favorite, as a frilly ground cover. 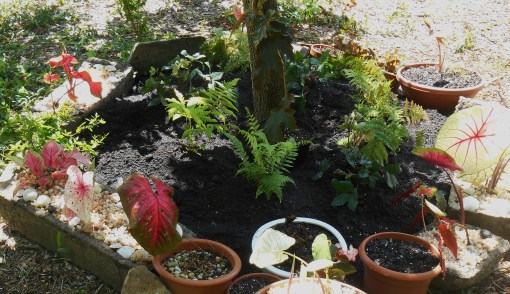 Time, the essential ingredient in gardening, will transform this motley conglomeration of bits and pieces into a beautiful garden within a few weeks.

Once the plants settle in and begin weaving themselves together, it will take on a life and vision of its own.

Gardens, like people, evolve in their own time from one form to the next.

We might plant a seed, push a cutting into the soil, or tuck a transplant into a new bed.  But that is only a gesture.  It is the concrete expression of a wish.

Magic happens after we water in our intention and wander away.

As the roots take hold, and the plant unfolds itself in new growth, something entirely new evolves.

Newly planted in 2013, this perennial bed has grown into a vibrant community of plants.

A community comes together as roots intertwine in the soil.

Vines stretch, branches form.  Flowers open.  Our wish takes on a life of its own.

It gets very complicated, but also very beautiful. 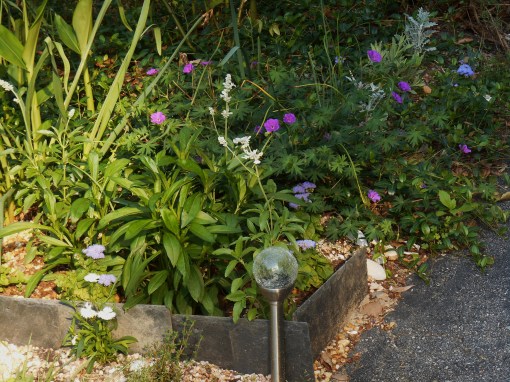 Words and Photos by Woodland Gnome 2014 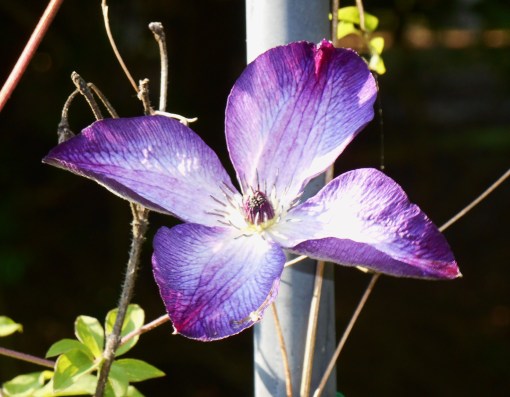 4 responses to “And Then It Got Complicated….”