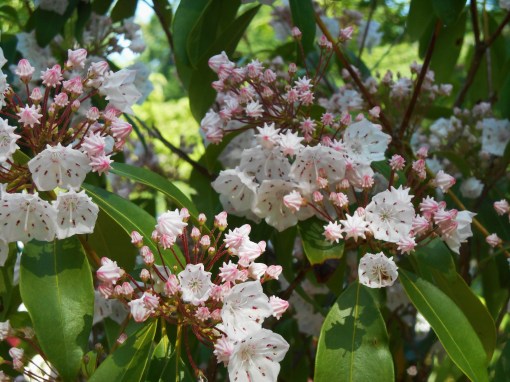 Saturday afternoon I looked out of the window, up into the forest, and was surprised to see our shrubs covered in flowers.

These evergreen wild looking shrubs, almost small trees, simply blend into the fabric of the forest through much of the year.  It is only for a few weeks in May that they burst into bloom, suddenly elegant and beautiful. 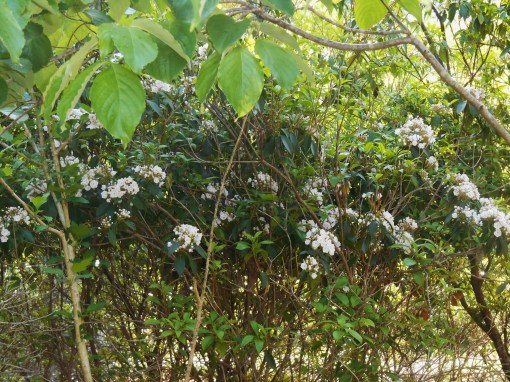 One of our most ornamental  native plants along the east coast of North America, early American  botanists first recorded Mountain Laurel, then called “Spoonwood,” in 1624.    Carl Linnaeus  named the shrub for Pehr Kalm, a Swede, who explored eastern North America in search of new and useful plants in 1748-49.  Mountain laurel was one of the plants Kalm collected to export to gardeners in Europe.

Mountain laurel grows from Maine all the way to Florida.  It even grows east along the Gulf Coast  from western Florida to eastern Louisiana.

Here in Williamsburg, the banks of our creeks and rivers are often covered in wild mountain laurel.  It is an understory shrub in our oak and pine forests.

South of Virginia, mountain laurel isn’t found near the coast.  It prefers the coolness of the mountains, and so its range is ever further west, at elevation, following the Blue Ridge and Appalachian mountains. 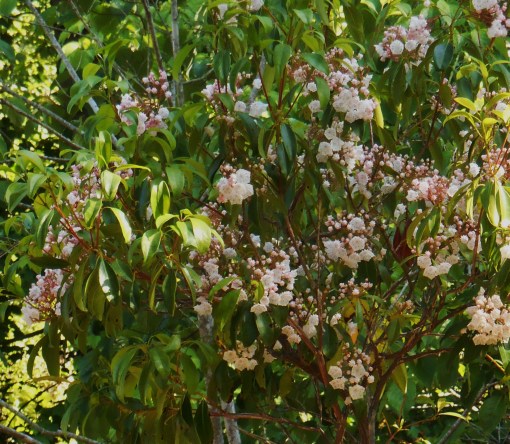 Mountain laurel, part of the Ericacea family of plants, is related more closely to blueberries than to bay laurel, which is native to Europe.

It prefers moist, acidic soil and requires at least partial shade.  Although the shrubs flower more abundantly in bright shade than deep, Kalmia don’t like growing in full sun.

These plants are best mulched, and fertilized, with pine straw or pine bark mulch.  When we shred our leaves in autumn, and again in early spring, I empty the bags around the roots of our little mountain laurel grove.  They also get offerings of Espoma Holly Tone once a year or so, in late autumn or early spring. 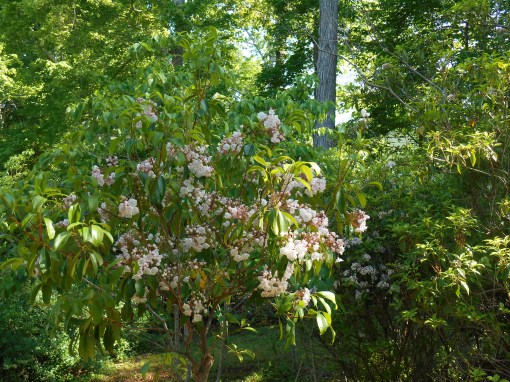 All parts of the mountain laurel shrub are poisonous, from root to nectar.  They have survived in our garden over the years because the deer won’t graze them.

Even honey made from Kalmia flowers in bitter and toxic for human consumption, although it will sustain a hive of bees. 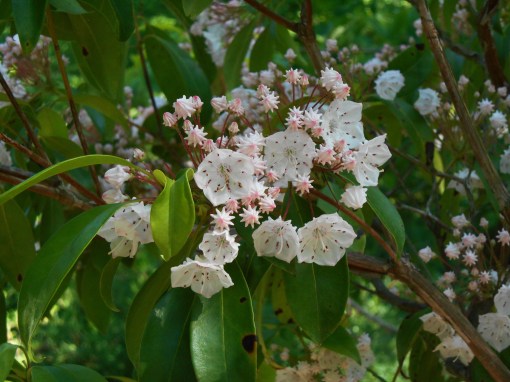 These shrubs don’t need pruning.  They are best left to grow in their own twisted, idiosyncratic way.

Their wood is very hard and brittle, much like the wood of azaleas, a relative.   I like using  branches of mountain laurel in winter floral displays.  They are sturdy enough to hold a string of twinkle lights, or small hung ornaments.

Although they can get very tall over many years in optimal conditions, most Kalmia won’t grow more than 20′ tall in one’s garden. 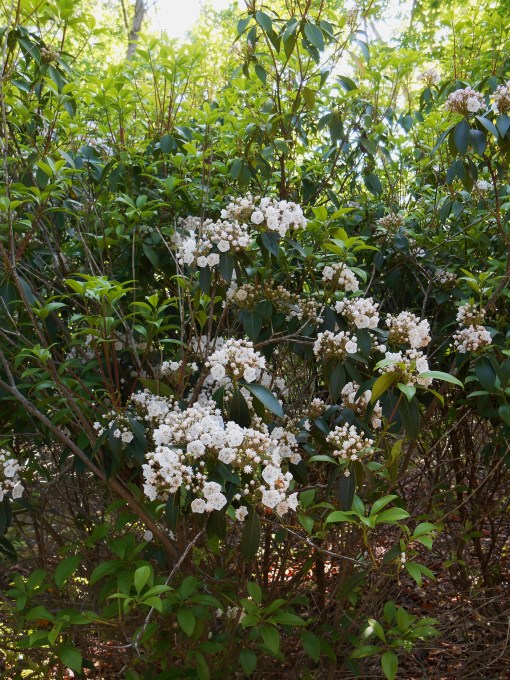 Over time they form a thicket.  Their open structure near the ground makes intriguing little places in the garden for birds and small animals to seek shelter.

Kalmia may be grown alongside dogwood trees, native blueberries, azaleas, native hollies, and of course, pines, oaks, and  other native hardwood trees.

Mountain laurel in the wild have flowers of white or pink.  Some cultivars in the nursery trade have been selected for darker flowers of red or maroon. 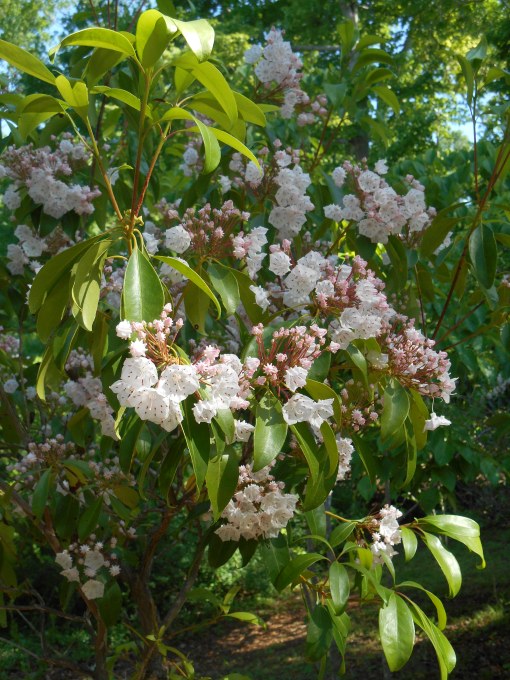 Ours are probably wild ones, since most of the flowers are white.

Loving mountain laurel as we do, I  purchased four little starts from a mail order nursery, and planted them at the edge of our forest near the drive in 2011. 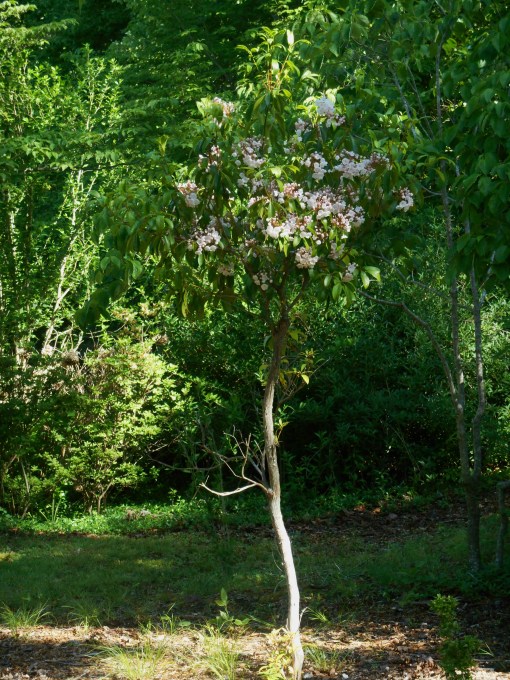 Growing slowly, they were growing , and were perhaps almost a foot tall when our trees fell last summer.

The heavy equipment had only one way in to deal with the mess, and no one noticed the little Kalmia starts under the mess of leaf litter when work began.  By the time I had presence of mind to look for them, they were gone.

Mountain laurel can be started from cuttings, but should never be dug from the wild. 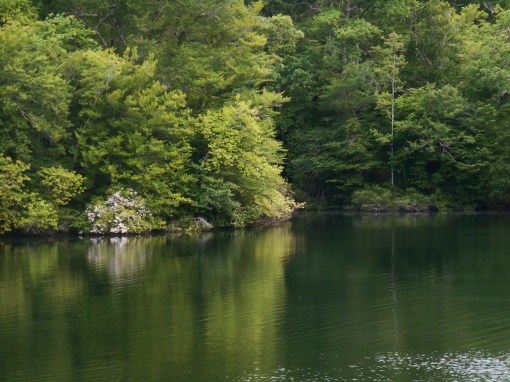 Shrubs can be ordered, and are sometimes found at nurseries in regions where they will grow.  Plant Mountain Laurel a little “high” like an azalea, as planting too deeply may kill the shrub.

Found in zones 5-9, these shrubs will grow successfully if you can create the moist, shady, acidic forest environment they prefer.  The roots like to remain cool and moist, so it is important to keep the shrubs mulched.  Water the first few seasons as the shrubs are established, and then only in times of drought. 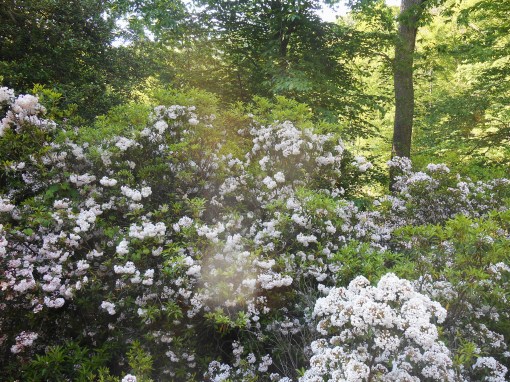 I love mountain laurel where it is growing in large masses in the wild.  One of our pleasures in May is to drive around in search of it, finding it peaking out of forested areas which haven’t yet been developed.   It is easily spotted from bridges, growing along the banks of our waterways; a lovely mass of light colored flowers, glowing softly in the forest. 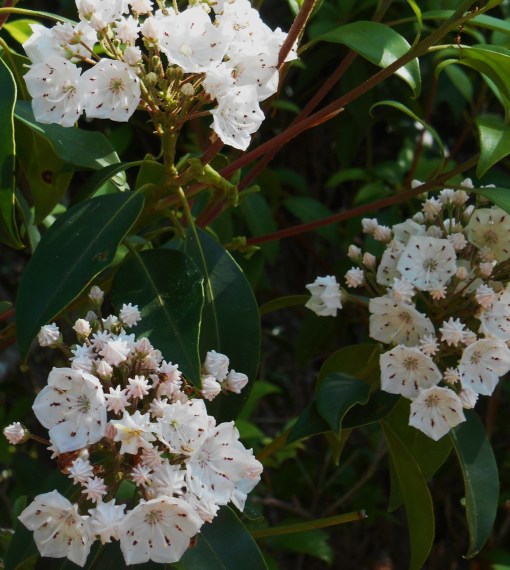