The church we know today as Bruton Parish was established during the first century of settlement here in Virginia.  It grew from the consolidation of several existing parishes in this area.

It was formally recognized, and its first rector named, in 1674.  Land  for building the church was donated in 1678 by Col. John Page.   The original Gothic style brick church was completed in  1683.

The original church’s foundation, inside the church yard.

Only about 60×24 feet, the original Bruton Parish church was located to the north and west of the present building, in what is now the church yard.

This new church served the needs of the growing population here in Virginia, and became very important in the life of the colony.

After the College of William and Mary was founded in 1693, and the Governor and his entourage began attending the church when the capitol was moved from Jamestown to Middle Plantation in 1699; the new church proved much too small for the growing community.  The town’s name had by now been changed to Williamsburg.

By 1706 the church vestry had begun to discuss building a larger church.  The Church of England had a firm hand in all community and  governmental affairs, and everyone in the community was expected to maintain a relationship with the Parish.

Everyone was required to not only belong to a Parish, but to support it financially and show up regularly for worship. The Parish was responsible for all baptisms, marriages, funerals, confirmations, and communion. 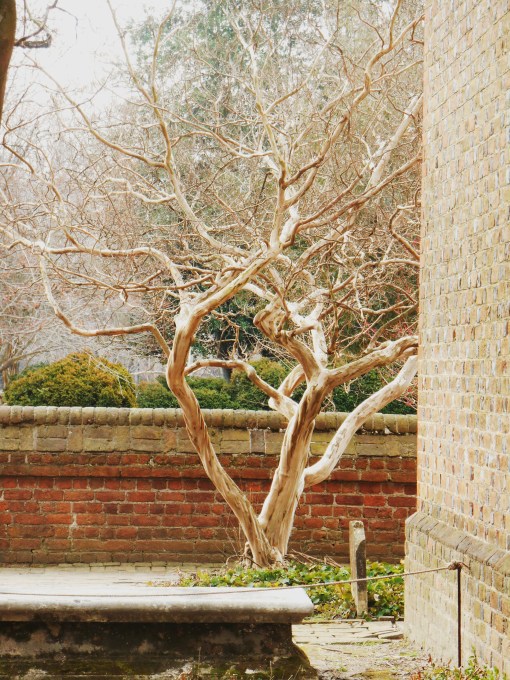 Crepe Myrtle and ivy grow in this corner of the church yard.  Boxwood shrubs grow beyond this portion of the wall.

Religious freedom wasn’t born until the time of the American Revolution. 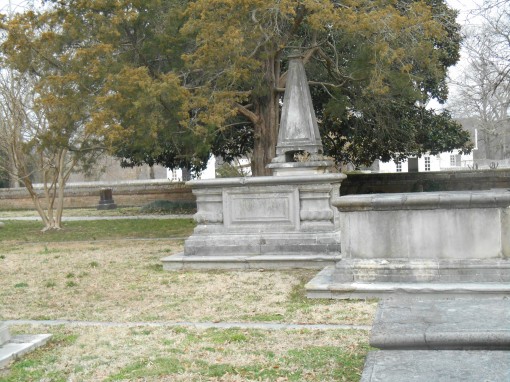 The original church was simply not large enough for all those who attended, especially when the House of Burgesses was in session.

Governor Alexander Spotswood designed the new church building.  His design was 75 feet long by 28 feet wide, the first cross shaped church in Virginia.  The new building was completed in 1715.  The original small brick church’s foundation can be found today in the church yard of the present church.

This is a particularly interesting tomb. Notice the symbols, reminiscent of Shakespear’s plays.

Some of the oldest marked graves in Virginia are found within this cemetery, now enclosed by a wall.  There are those who read much history from a well kept church yard.

Another view of the same bomb.

The body of young Mathew Whaley, the 9 year old boy who died quite suddenly of pneumonia in 1675, lies here in a prominent grave, beside his father.  Our neighborhood  elementary school, just a short distance away, is named for little Mathew.

This church has witnessed the history of our nation.   It was disenfranchised from the Anglican Church of England in 1776 and lost its tax support.  It became an Episcopalian church, and remains one today.

The main entrance to Bruton Parish, inside the church yard wall.

Bruton Parish witnessed both the American Revolution in the Eighteenth Century, and the American Civil War in the 1860’s.  The church was used as a hospital for wounded soldiers in 1862, after The Battle of Williamsburg. 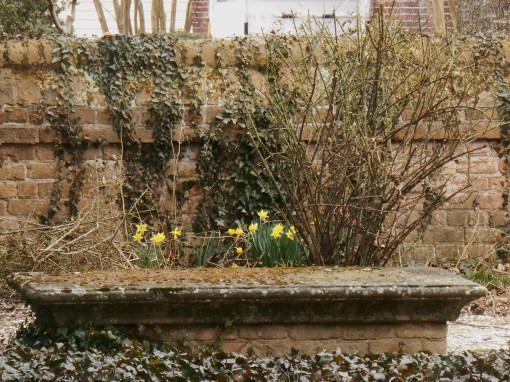 As you might expect, this important and historic church houses many historical treasures, many gifts from the wealthy and powerful.  Through all or the changes this church has experienced during the last 340 years, its true treasure is its strong congregation.

A vital part of our community today, just as it was in the 17th century; this church, churchyard, and congregation remain important to our community here in Williamsburg, Virginia.

The church opens its doors to visitors for tours, concerts, meetings, and worship.  Community groups use its Parish house, and Bruton Paris maintains many ministries in the community.

Here you will find living history, even inside the church yard.

“If the freedom of religion, guaranteed to us by law in theory, can ever rise in practice under the overbearing inquisition of public opinion,

then and only then, will truth prevail over fanaticism.“

One’s Own Back Garden

Signs of Spring in Colonial Williamsburg